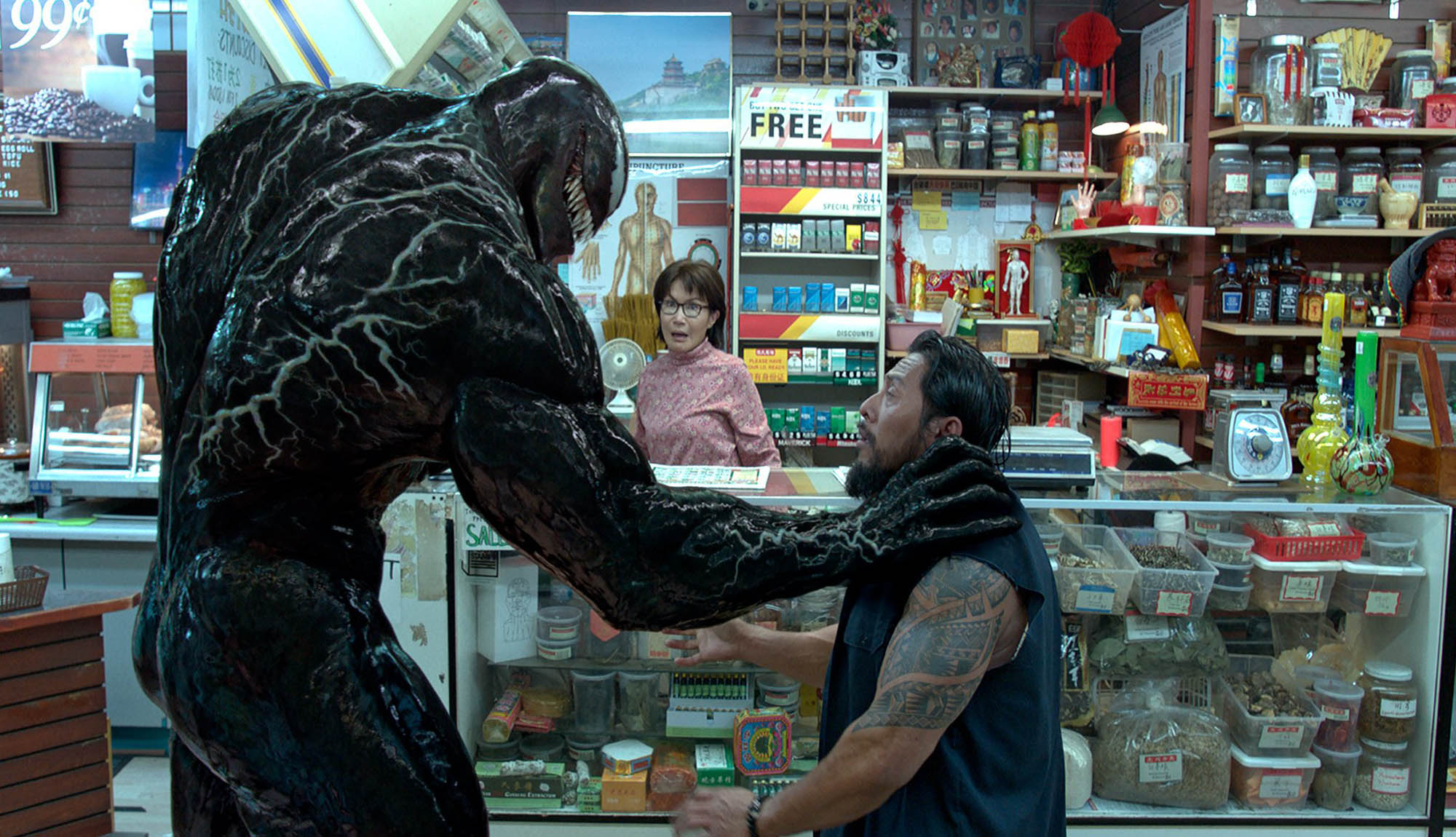 Ruben Fleischer’s Venom offers an astonishingly rushed and inconsistently aestheticized reintroduction to one of Spider-Man’s more famous adversaries. Hard-hitting reporter Eddie Brock (Tom Hardy) is established out of the gate via a montage of his investigative news show as nothing short of thorough, yet when he’s assigned a puff piece on technocrat Carlton Drake (Riz Ahmed), he freely and without reservation steals confidential legal documents from his lawyer girlfriend, Anne (Michelle Williams), and attempts to ambush Drake. After losing both his job and Anne, Eddie stumbles around San Francisco in a drunken haze until he’s brought back into Drake’s orbit when a rogue employee (Jenny Slate) alerts the disgraced journo that her boss is killing the poor by the busful and trying to bond alien “symbiotes” to human hosts. It’s a path to redemption for Eddie, and it’s as dully telegraphed as it sounds.

This setup invites the possibility for unnerving horror, particularly whenever someone comes into contact with the symbiotes, which suggest hopped-up mollusks as their sticky tentacles and tendrils crawl over anything and everything. But Fleischer’s film moves so fast that even a scene that would appear ripe for a disarming scare, as in Eddie sneaking into a quarantine zone in Drake’s company where test hosts, dead or dying, are barely glimpsed, loses any and all sense of atmosphere. Viewers only get the slightest sense of the company’s vast hallway of containment rooms before one of the symbiotes latches onto Eddie, imbuing the bewildered, terrified journalist with superpowers, a growling voice in his head, and a powerful bloodlust.

It’s here that Venom briefly jolts to life. Hardy, up to this point left in the dust of the film’s forward momentum of the plot, is like a hammer in his full-throated embrace of Eddie’s wild transformation. Jerking his head in fright at the sound of Venom’s snarl quakes in his ears, Eddie starts to move in halting, unpredictable spasms, lunging for sources of nourishment to quench the symbiote’s insatiable hunger for live flesh. In the film’s best scene, Eddie barges in on a lunch between Anne and her new boyfriend, Dan (Reid Scott), grabs a piece of seafood off a waiter’s tray, takes a bite of it, only to then exclaim with pure disgust: “This is dead.” Feverish in his ramblings, Eddie finally—and hilariously—immerses himself in the restaurant’s lobster tank, biting into a live crustacean with a sigh of deep contentment.

Venom’s quick pace benefits such lively detours into humor, particularly in scenes where Eddie argues with the voice inside his head, as when the symbiote encourages the acrophobic Eddie to jump out of a skyscraper window, only for a smash cut to reveal the man punching an elevator button as his inner alien growls, “Pussy.” In such moments, Hardy’s jittery performance of a man reconciling two selves captures the same sublime absurdity that made Nicolas Cage so wildly kinetic as the Ghost Rider.

The final act’s full-tilt embrace of action, though, undermines such flashes of actorly idiosyncrasy, reorienting the film around a climax that uses rapid cuts and dark lighting to stage a CGI-intensive fight that makes Venom resemble a bad superhero flick from the mid-aughts. The battle involves Venom and a rival symbiote, and Fleischer reduces the film to a clobbering match between two similar alien beings whose interlocking membranes turn them into one giant mass of swinging fists and gnashing teeth. That this concluding conflict comes out of nowhere and features at is center a barely established villain with contradictory motivations only exacerbates the finale’s clumsiness.

Venom has enjoyed a renaissance over the last decade. His importance in the Miles Morales arc boosted his relevance, and a just-launched solo book by Donny Cates and Ryan Stegman already seems like a definitive take on the character, what with its blend of nightmarish body horror and Lovecraftian cosmic nihilism. By separating out the character from his connection to Spider-Man, Venom had the potential to explore both Eddie and the alien that consumes him in greater depth, establishing their connection as more than just a chance moment of genetic fusion. Instead, the film cuts out all but the most purposeful scenes of plot, making Venom feel less developed than he might have been playing second fiddle to New York’s friendliest neighbor.