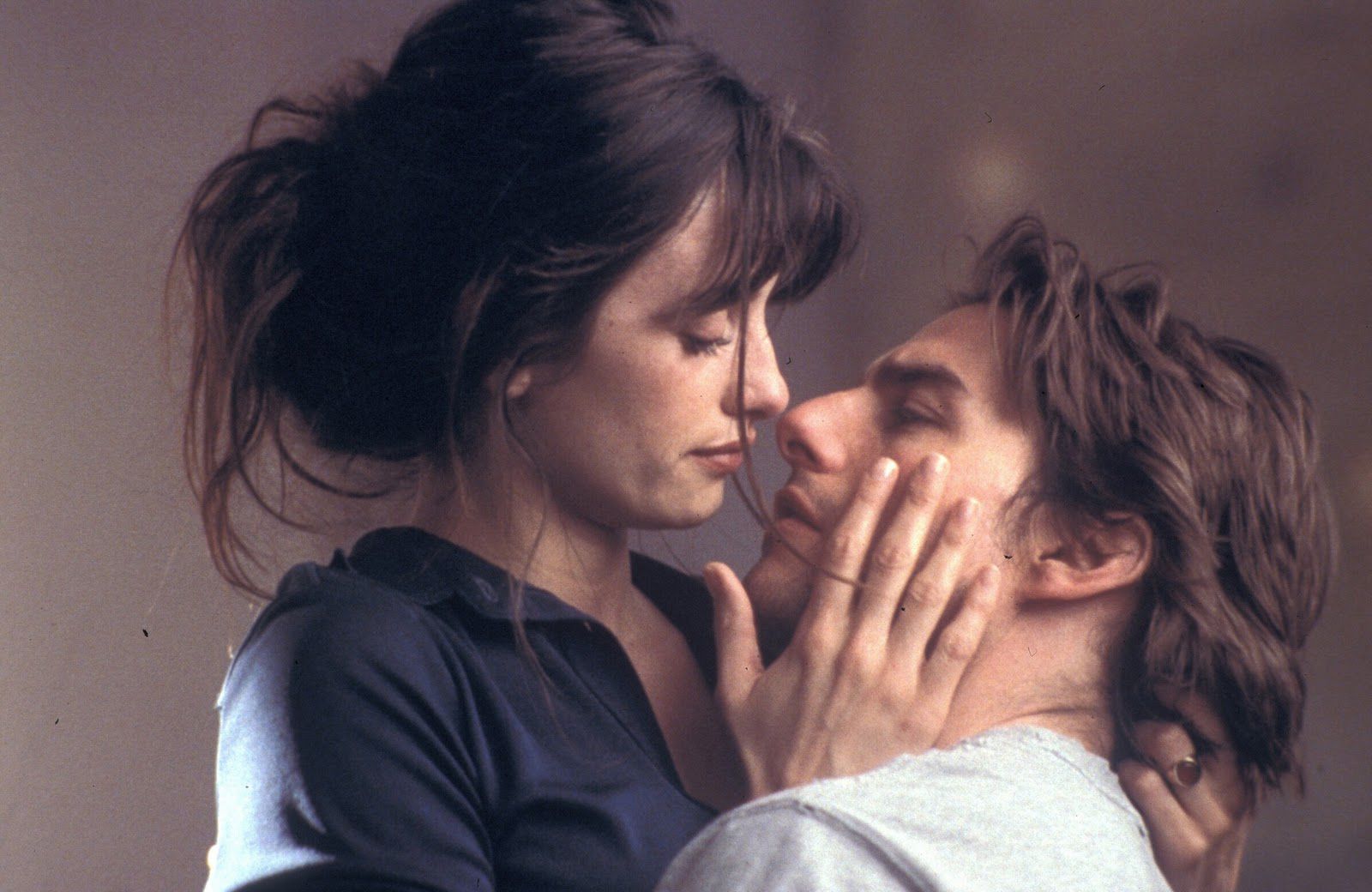 The “Top Rumors About Tom Cruise” STATshot from Volume 37, Issue 43 of The Onion had this to say about the superstar: “Had self cloned so he could fellate self.” Forget about Cruise’s semi-resemblance to Open Your Eyes lead Eduardo Noriega and any tears the actor might have shed over witnessing a pretty boy lose his face (read: fortune) via a tragic accident. This Onion blurb serves a more imminent function as tagline for the whole of Vanilla Sky, a masturbatory pop-culture thriller that services Cameron Crowe’s own fondness for rock n’ roll rather than actually informing its hero’s own existential crisis. Crowe’s carbon copy version of Alejandro Amenábar’s narcissist’s nightmare sometimes improves on the original but it’s a mostly reductive, self-centered affair.

David Ames (Cruise) is a pin-up publisher who owns both a CD-R alarm clock (by which the film trivially accounts for Amenábar’s “abre los ojos”) and a television set that slides into the floor when not in operation. Crowe’s feeble-minded wealth signifiers grow considerably more tiresome as the film putters along; croissants greet David outside his old-fashioned office building while inside it’s business as usual (trigger-fire cover proofing and urgent e-mails from Courtney Love). As the major company shareholder, David is wary of the grim-faced board members (“The Seven Dwarfs”) he believes are hoping to leech off his father’s legacy. If his father “wasn’t built for the 20th century,” David seems to rectify his past via luxury goods. Crowe may up the Amenábar ante by linking his hero’s occupational angst to fairy-tale allegory but he does nothing of interest with David’s paranoiac fears; in fact, the film’s rapid-fire flashbacks establish the young David as a kid likely to be more interested in bike-riding than Grimm-reading.

Julie (Cameron Diaz) is the unbearably shrill other woman who vies for David’s love by way of his sex juices (she swallows, so why not first dibs on his heart?). Where Amenábar’s Nuria was a fascinatingly seductive cipher (and therefore desirable alternative), Julie is a ludicrous representation of the clingy adulteress. Once David’s “reality” begins to confuse his women, her presence, in turn, becomes awkward and comical. Sofia (Penélope Cruz) is Mr. Pleasured Life’s female du jour (“the last semi-guileless girl in New York City”), a timid Spanish creature that hopes to humble David’s egocentric heart. Cruz’s mime routine from Open Your Eyes heavy-handedly accentuated Amenábar obsessions with reality and cognition. In Vanilla, Sofia’s hobby may be unburdened by metaphor (she’s a dancer) yet Crowe ridiculously emphasizes the woman’s grace by having her pick up dirty laundry with her toes. For added Latin flavor, Crowe has Cruz breakout into unexplained Spanish when her character is at her most emotionally frayed.

Julie drives off a Central Park overpass with a pleading David by her side. He is disfigured in the accident, forced to don a prosthetic mask until plastic surgery catches up with the times. David’s scars are less Twilight Zone-piggish than those that plagued Amenábar’s César, while John Toll’s camerawork does wonders with the egomaniac’s party mask (indeed, Vanilla’s club scene packs a hotter, sweatier wallop than its original incarnation). Crowe’s take on David and Sofia’s breakup is relatively understated; more so than in Eyes, there is a sense that Sofia doesn’t owe David anything since she only knew him one night prior to his disfigurement. This restraint, though, is elusive. Where Amenábar’s film dripped with dread, Vanilla is considerably more, well, vanilla—no thanks to a dreamy score (ripe with classic rock songs spanning the Bob Dylan/R.E.M. spectrum) that’s entirely too “shiny happy people” for the narrative.

Crowe does amazing things with his mise-en-scène: artwork in David’s apartment fabulously prefigures the film’s vehicular chaos while a poster of Jules and Jim (however obvious a reference to Vanilla’s own love triangle) terrifyingly rewrites the joy on Jeanne Moreau’s face. Crowe, though, is considerably less trusting of his audience than Amenábar, sprinkling Vanilla with endless references to the cryogenic/re-animation theme that latently bubbled beneath Eyes’ surface. Dr. Curtis McCabe (Kurt Russell) counsels the troubled David when the scarred man is accused of murder, egregiously calling attention to the film’s semantics by hinting at David’s paranoiac mentality and dream-like worldview (“Can you tell the difference between dreams and reality?”). While Crowe’s existential procedural is about as simple-minded as Amenábar’s, Vanilla significantly humanizes its hero via pop-culture references. The problem, though, is that the film’s surprise ending comes at a crippling price.

Crowe’s finale is visually chilling if only because the WTC makes its most apt, post-9/11 appearance to date. (Spoiler warning.) By de-emphasizing David’s past and his pop-cultural desires throughout the film, Vanilla (like Eyes) only becomes intriguing in retrospect; and, even then, only post Life Extension. Even if the spectator buys the notion that David is rewriting his world via pop signifiers, whose life is he re-inventing, his own or Crowe’s? What once seemed like a gratuitous excuse to play diegetic music (Jeff Buckley, Vikki Carr) now becomes David’s pleasure principle. He may like Sinead O’Connor, but are we to believe that David likes Carr, let alone Monet and To Kill a Mockingbird? David isn’t that deep. David’s favorite Beatle may be George Harrison (cue serendipity!), but we’ve all seen Almost Famous; there’s nothing to suggest that Vanilla is anything more than an existential whine set to some baby boomer’s favorite songs. Even if Cruise’s fondness for Eyes was narcissistically informed, Vanilla plays out like Crowe’s own humping post. That isn’t David Ames jumping off the roof, it’s Almost Famous’s Patrick Fugit.