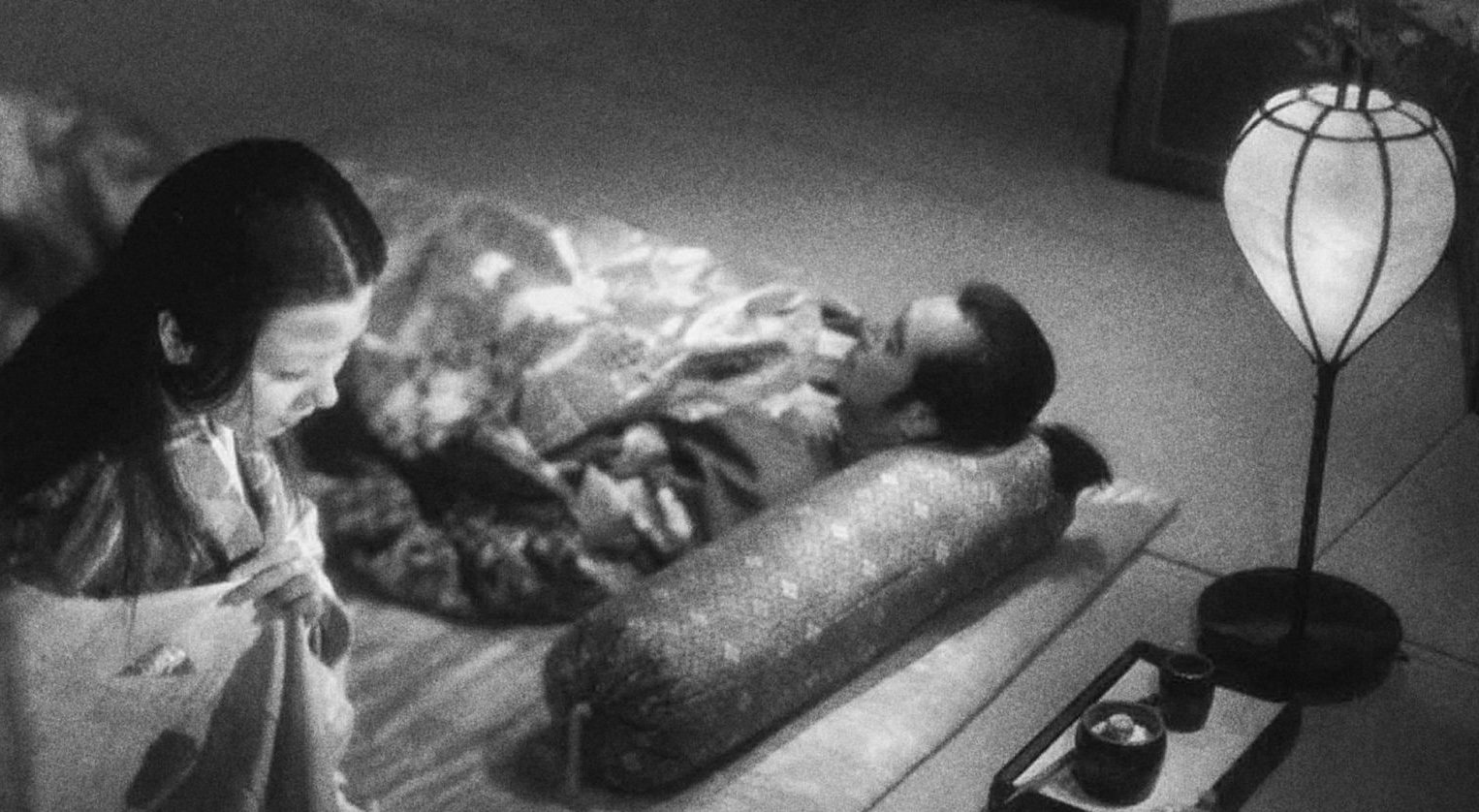 Japanese director Kenji Mizoguchi’s most widely heralded film, Ugetsu is also a stalwart presence in worldwide cinema-history polls, perhaps because it not only encapsulates so many of Mizoguchi’s concerns (post-WWII questions of jingoism, the plight of women trapped in patriarchy, and conversely issues of national character), but because he also folds them into a dense, fairly complicated episodic narrative, taking place during Japan’s civil wars of the 16th century. (Because the storyline has what could legitimately be considered “twists,” be advised that the rest of the review contains spoilers, though Mizoguchi purposefully undercuts the plot’s potential surprises by foreshadowing every revelation through internal, formal echoes.)

The film’s main storyline, in which a destitute potter is sidelined from his wife and child by a seductive spirit, is an adaptation of a short story from Ugetsu Monogatari by popular 18th-century writer Akinari Ueda. Genjuro makes an attempt to stockpile his ceramic wares into a skiff along with his doting, maternal wife, Miyagi (Kinuyo Tanaka), and young son, Gen’ichi, so that he can cash in at the city street market. (The son is prepubescent and, in Mizoguchi’s critique of masculinity, nearly invisible in his father’s eyes.) Genjuro’s sister, Ohama (Mitsuko Mito), and her husband, Tôbei (Eitarô Ozawa), tag along, though Tôbei is far more interested in pursuing his dream of becoming a renowned samurai warrior than helping Genjuro sell his merchandise.

Adrift in the night-shrouded lake blanketed with Val Lewton-esque ruffles of fog, a seemingly abandoned boat glides up to the quintet and an emaciated near-corpse warns the men in the boat to watch out for marauding bandits and to keep a close eye on their women. In the very next scene, Genjuro is dropping his wife and child alone on the shoreline to fend for themselves because, so he says, it would be too dangerous for them in the city.

He’s correct, of course, but the danger in the city is directed toward him, whereas the countryside brings Miyagi almost immediate death at the end of a scavenger’s spear. Because Genjuro unloads his family so swiftly at the first hint of danger, and because his peril comes accompanied by the sexual rapture he experiences with the spirit Lady Wasaka (Machiko Kyô), it wouldn’t be a radical leap to chart his misguided anti-domestic detour with that of Tôbei. Ohama Immediately succumbs to prostitution after Tôbei leaves her so as to pursue his selfish, quixotic quest of becoming a samurai legend.

In Ugetsu, the female characters are put through the wringer; even Wasaka, who might be expected to drop the painted-eyebrow façade and emerge as a malevolent demon in the final reel, is actually a crushed, tragic victim of earlier male violence, a woman who never lived long enough to experience love. But interestingly enough, it’s the men who end up shouldering the emotional toll. With all due respect to Mizoguchi’s mysterious, incantatory, gorgeous parable, is it this crucial variation on his approach to feminism that causes Ugetsu’s pinnacular reputation in the film-critic boys’ club?