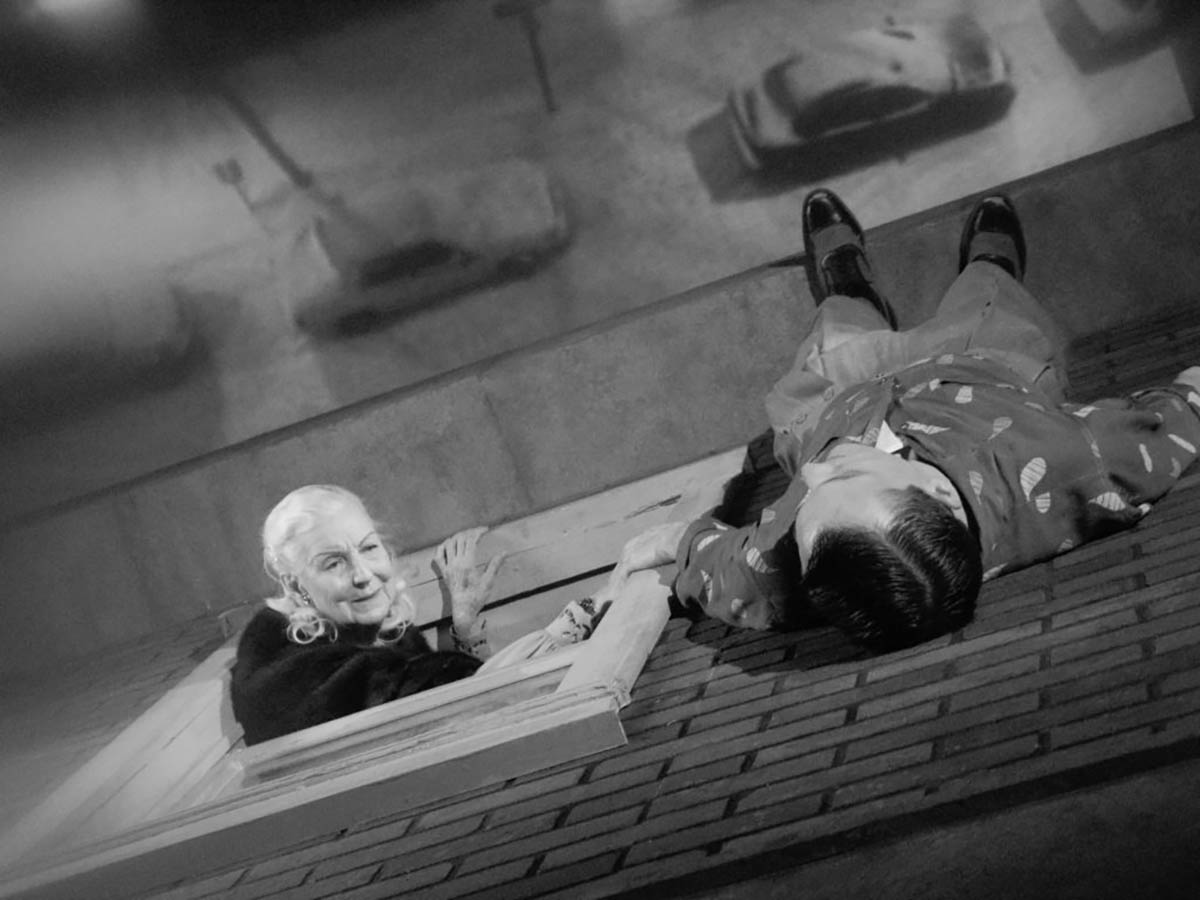 Guy Maddin’s thrilling, ingenious My Winnipeg is a love letter to the Canadian director’s hometown disguised as a Buñuel “escape from the bourgeoisie” comedy. Like a guest at a never-ending dinner party, Maddin (who narrates the B&W, MOS film) is plotting to finally leave the comfort of “snowy, sleepwalking Winnipeg,” the city of his birth—the city he’s spent his entire life in—but must fight the unseen magnetic forces that are keeping him there. Fortunately, unlike Buñuel’s clueless characters, Maddin has a secret weapon—he’s a filmmaker. “What if I film my way out of here?” he proposes.

And thus begins one man’s incredible odyssey through a looking glass past. Using a combination of archival footage, scenes of narcoleptic train passengers, words flashing onto the screen as in an old train robbery silent, the sounds of chugging railroad cars and jangling keys, of hair clippers mixed with a symphony, repeating images of “forks, lap and fur” (the ingredients of the “magnetic pull”), not to mention hilarious narration (wherein Maddin dispenses “facts” like Winnipeg having ten times the sleepwalking rate of anywhere in the world), all mingled with descriptions of his “mother” (as strong as the railroad), Maddin creates a “docu-fantasia” that is more truthful than most nonfiction films. He deals not just in physical reality, but psychic as well. Maddin’s small childhood memories, just as momentous as the city’s grand history, are entwined as one.

And what memories he has—of “dreamy addresses” (Winnipeg has an ordinance that all residents must admit former tenants to their abode for one night), of a bizarre home that housed his mother’s beauty parlor. “I was proud of the strangeness,” Maddin admits. It was a “chunk of happy home.” Growing up in a salon, Maddin was forever surrounded by the “smell of female vanity and desperation.” Desperate to film his way out of the past, the director decides to sublet his childhood home for a month and recreate scenes from his youth using both actors and his “real” mother (played by the still-stunning, silver-haired, 40s noir actress Ann Savage).

Things get off to a start both good (the movers are a tax deduction—“I’m a filmmaker!” Maddin reminds) and bad (he’s forced to include in his reenactments the current tenant, “a strange lady who won’t leave her house”). The actors watch the TV program “Ledgeman!” (the titular character threatens to jump from a ledge in every episode, but is always saved by the director’s “actress mother”), and witness/perform the “straightening of the hall runner.” Maddin stages the day his sister hit a deer on the highway, his mother twisting the tragedy into a salacious tryst with the “man with the tire iron”, who put the dying deer out of its misery. “Did he pay you?” she huffs. “Everything that happens in the city is a euphemism,” Maddin explains. (Later he adds, “Mother is the most psychic of all Winnipeggers.”) He even accuses mom of trying to sabotage his film (the words “Passive aggressive!” pop onto the screen), captures every detail like the “YUG” carved “dyslexically” into his bedroom door. Much to his chagrin, mom wants to include his dead father in the proceedings, so they reach an uneasy compromise—pretending he’s had dad exhumed and buried in the living room. (It doesn’t get any more Buñuel than this!)

Even the city itself—with the frozen Ferris wheels of its amusement park “Happyland,” built in 1906 and shown in whimsical animation (as is the 1919 worker’s strike), and the “Academy of the Ultravixens” (a.k.a. St. Mary’s Academy)—is snow-piled in absurdist tradition. Maddin shows us ghostly “archival” scenes of a man who de-spooks furniture, of a séance that erupts into a ballet recital, of the sign graveyard (another Winnipeg law forbids throwing away old signs) and “Garbage Hill,” a park composed of trash where children are often impaled on car fenders. (“My Winnipeg!” Maddin exclaims with pride.) The director’s silent film style is always laced with a modern sensibility, though. While his camera records black footprints in the pristine white snow, Maddin describes how January is the coldest month—“the month when the condoms come off!” “Bareback” flashes across the screen. Navigating iced alleyways, the director explains Winnipeg’s “phantom grid,” a series of nameless back lanes existing alongside the formal streets. One street, Lorette, is half and half. “It’s a hermaphrodite street,” Maddin says. “No one speaks of Lorette.”

In this warped valentine to a city where “demolition is one of the few growth industries” and the “MT Centre” is empty, Maddin reminisces, stealing a hockey shirt from a famed Russian visiting player, wearing it for a few stick hits, then quickly tossing it in the wash, fearful of the KGB. He wishes he could say his father, employed on the management side of Winnipeg’s NHL team, “spontaneously combusted on the ice,” though he died a much less dramatic death. The best Maddin can do is craft a passionate dream in which elderly hockey legends (including one named “Smiley”, so called because head wounds left him eternally happy) go blade to blade at the old arena as demolition rains down upon them. Of the NHL, which sounded the death knell for Winnipeg pros and perhaps the city’s future itself, Maddin laments, “We never should have joined that league!”

And the hilarious romp continues right back to mom—afraid of “birds and messy hair”—being threatened with a parakeet by her own actor-children in a last ditch effort to get her to cook for them. Maddin’s camera captures the winter walkers as they visit the notorious frozen horse heads (yup, a herd got stuck in the snow up to their necks), which soon becomes a lovers’ stroll. “Golden boy!” and “Man pageants!” and “Corridor of Thighs” flashes onto the screen when Maddin trains his lens on Winnipeg’s infamous debauched nightclub, the mayor the judge of these risqué beauty pageants, which ceased when too many “golden boys” were found holding “golden jobs” at city hall. (The pipe-smoking contest that followed in the pageant’s wake just wasn’t as exciting.) From the “Dance of the hairless boners!” in the gender segregated spa (“Why? Why don’t we just swim?” Maddin wondered as a kid), to the animated gay bison that stampede Happyland, to “Aerial Happyland” (the rooftops of skyscrapers where Winnipeg’s homeless live out of sight), to the spectacular “If Day” in which 5,000 Nazis invade Winnipeg, renaming it Himmlerstadt, Maddin’s incomparable triumph is his sweeping annihilation of such quaint categories as “fiction” and “doc.” As sturdy a hybrid as Lorette, My Winnipeg is breathtakingly one-hundred-percent true to the heart, the only truth that matters in the “winter wonder” end.

My Winnipeg will screen as part of the Tribeca Film Festival.

“You Can’t Cheat Documentary”: A Conversation with Guy Maddin

Homos in Distress: Two from the Film Society of Lincoln Center Series “1968: An International Perspective”