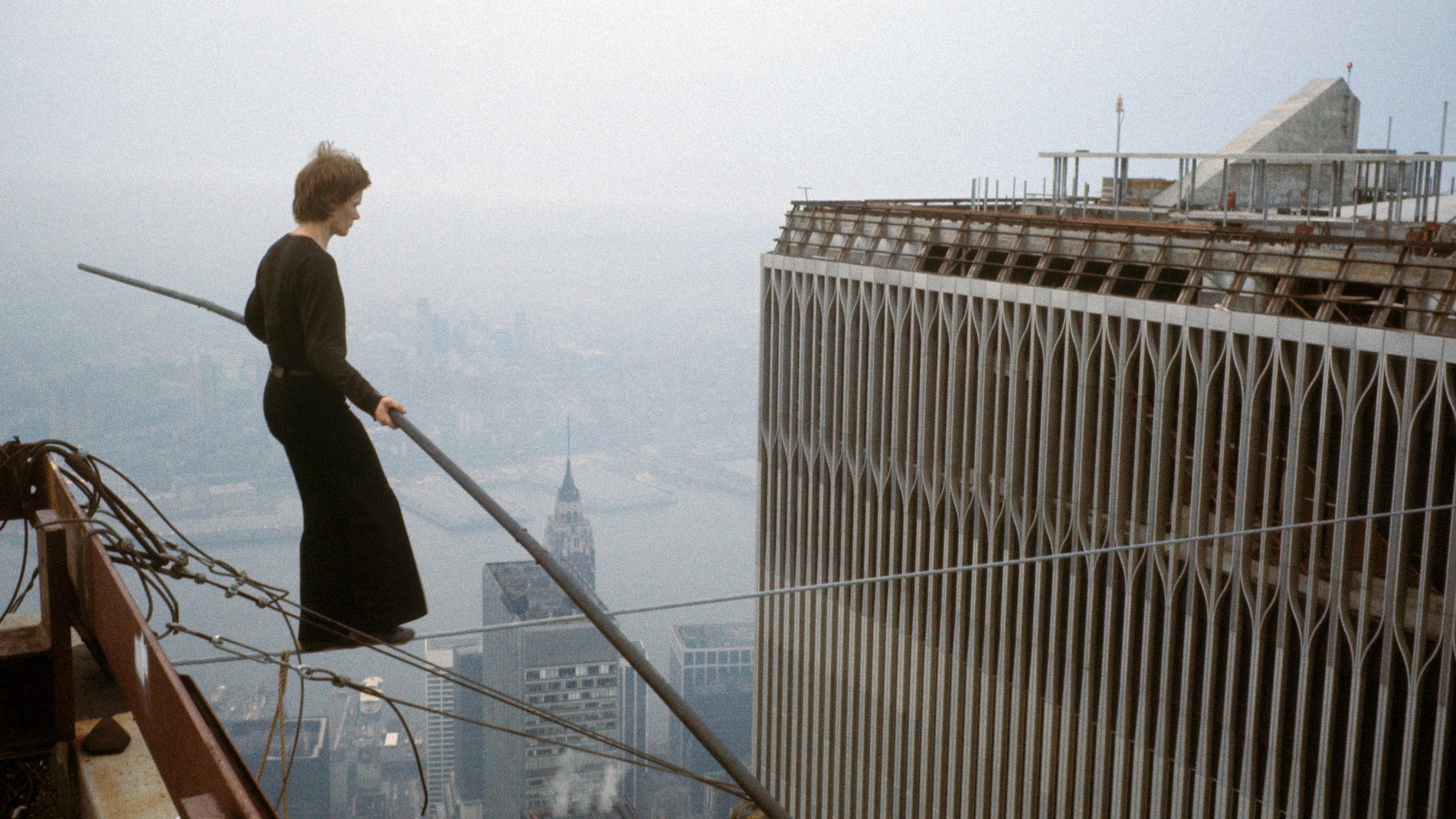 When Philippe Petit—the lively Frenchman who executed the “artistic crime of the century” in the summer of 1974 by sneaking up to the top of the World Trade Center and, for nearly an hour, performing a high-wire act without safety net or harness—was taken into custody and charged with trespassing and disorderly conduct, reporters immediately shoved microphones in his face. “Why?” they wanted to know. “Why did he do it?”

“Why? That is so American to ask why,” Petit answers in James Marsh’s poignant documentary Man On Wire, inspired by his autobiographical account To Reach The Clouds,and which takes its name from the words listed on the police record under ‘detail of complaint.’ “Here I do something magnificent and beautiful and people ask why,” he continues, gesturing his frustration. “There is no why!”

In other words, it’s like asking a mortal to explain a miracle, which is what Petit and all his co-conspirators pretty much agree happened that day. Through a combination of talking head interviews with the accomplices, often introduced in shadowed profile (aliases like “The Australian” and “Quality Guy” included under their names), a wealth of archival material (from home movies to professional still photos—Petit never met a camera he wouldn’t perform for), and B&W re-enactments that pale in comparison to Petit’s own hyperactive “re-enactments,” which use everything from small-scale models to the curtains and furniture at his Catskills home, Marsh crafts a briskly edited, fast-moving heist flick in which nothing gets stolen and only the perpetrator’s life is at stake.

That Petit lived wasn’t inexplicable, for his superhuman skill was never in doubt (“Of course, we all knew that he could fall… we may have thought it, but we didn’t believe it,” team member Jean-Francois explains). Everything else, however, from covertly getting past security to seamlessly rigging the equipment, all without the aid of a test run, was never a fait accompli. In fact, to say that fortune shined upon Petit and his band of death-defying merry pranksters, from start to finish, is a vast understatement. Besides heavy equipment being successfully transported past sleeping guards (a sequence Marsh scores with suspenseful strings) and a fishing line that missed its target, luckily landing at the very ledge of the building (one gust of wind and the “coup,” as Petit called his plan, would be wrecked), there was also the borrowed ID, courtesy of “Inside Man” Barry Greenhouse, an employee on the 82nd floor of the south tower.

So after all the intense preparation—from the accomplices swaying on wires to help Petit practice the effects of wind, to the small scale models built to figure out the rigging, from the engineering of the bow and arrow to get the rope from one tower to the other, to the nabbing of credentials that would allow Petit and his (American and Australian!) co-conspirators to pose as French journalists (doing a piece on the construction workers and thus allowing both WTC access and detailed photos of the buildings themselves)—this is what it came down to: luck. But twists of fate are par for the course for Petit, a man whose compulsion to walk between the towers was born at the time of the World Trade Center’s conception, and whose dream grew as the buildings rose (Marsh deftly splits the screen between the construction workers and the gangly, youthful Petit practicing his high-wire act). The WTC endeavor was nothing less than a calling for Petit—“as if the towers had been built specifically for Philippe” more than one co-conspirator says—a Don Quixote with wires in lieu of windmills. But unlike that thwarted hero, Petit’s success had as much to do with his skill as a salesman as it did with his otherworldly equilibrium.

Petit—who at the time looked like a red-headed version of Malcolm McDowell in A Clockwork Orange, a “provocateur” who once stole the watch off an arresting officer in Sydney (and who, during his first meeting with Man on Wire director Marsh, showed him how he could kill a man with a copy of “People” magazine)—“pitched” his plan, according to co-conspirator Albert, as if “he were selling time shares.” (Another accomplice, “The Australian,” went along with the scheme despite his profound fear of arrest. “Americans are very litigious,” he says. “Involuntary manslaughter, assisted suicide.”) And what an odd assortment of folks this high-wire artist, who prepared for feats by watching old bank robbery movies, enlisted. Marsh introduces us to the upright, reliable French crew, including Jean-Louis and Jean-Francois, both of whom had helped Petit pull off similar illegal acts at Notre Dame Cathedral and Australia’s Sydney Harbour Bridge, as well as his emotional support system/girlfriend Annie. There are also less worthy sorts like American “Donald,” who Jean-Louis accuses of showing up stoned the night before. (Donald’s shrugging response, “I smoked pot every day for 35 years—no reason to think I wasn’t stoned that night.”)

This happened in the free spirited seventies after all, and Marsh never lets us forget it, from the disco music on the soundtrack, to the B&W footage of Petit traversing bohemian Paris via unicycle, to the face of tricky Dick defending himself on the evening news, his corruption standing in stark contrast to Petit’s illegal act (“Against the law but not wicked or mean,” says Jean-Francois, just “wonderful”), which occurred the same week that Watergate reached its climax. Petit regales with the tale of how, upon his release, he was greeted by a beautiful girl—and ended up on a waterbed in some strange loft when he was supposed to be giving interviews. (Marsh stages a humorous re-enactment with echoes of the ménage a trois from A Clockwork Orange.)

Marsh has said that he wanted to depict “a true life fairytale, set in an era usually remembered as squalid and corrupt.” And by focusing solely on the “Miracle on 34th Street” aspect to Petit’s sky “dance” (he wasn’t “walking,” but rather “dancing,” an arresting officer adamantly states), eschewing any allusion to the fate of those towers less than thirty years later, Marsh has wisely taken the high road. The tragedy of 9/11 is palpably present in every frame featuring the WTC—to put an exclamation point on it would have been both unnecessary and a disservice to Petit’s own story of living. “To me it’s so simple,” Petit explains, as if walking tightropes makes more sense than any nine-to-five pursuit. “Life should be lived on the edge of life.”

For Petit really was the first man to conquer the towers (and in the most peaceful way). This high-wire feat was a calling, a spiritual journey he had to make. He describes the “1/2 millimeter mistake or 1/4 second of distraction” it takes to lose your life as if that’s part of the reason for doing it, “each day a work of art.” His accomplices describe how his face changes—like a “sphinx”—when he’s in the zone, that they know that this metamorphosis signals success. Their attention to detail that day was astounding. Petit recalls the “darkness of the freight elevator” as if it were yesterday, while “Donald” remembers that it was “a misty day” with “a little bit of wind” (eerily reminiscent of the specific 9/11 remembrances of that “bright sunny morning”). Jean-Louis breaks down at the memory of the relief he felt when Petit stopped “walking” and began to “dance.”

After initially being terrified when a piece of black clothing fell to the earth, Annie describes how, from down below, it looked like Petit was “walking on clouds.” Speaking of the moments when he lay down on the wire, when he kneeled and saluted the crowd, her eyes actually take on a faraway gaze before flooding with tears. This is someone describing a religious experience, the witnessing of art transformed into miracle. Petit claims to have looked down at the crowd (because, hey, he’d never have that chance again!) and actually “heard” the applause. (And who’s to second-guess a man who walks through air?) Petit merely laughed at the cops who’d come to pluck him from the sky—actually let them get within grabbing distance before rushing back to the middle of the rope, “knowing they wouldn’t follow.” (The audience I saw the film with broke into loud applause as Petit recounted the scene over the archival stills.) Petit informs that “the most dangerous part” occurred when, after being threatened with a helicopter rescue, he surrendered only to have the cops nearly throw him down the stairs in frustration. (An old newsreel shows one of the arresting officers being asked what he was thinking during Petit’s performance. “I watched a once-in-a-lifetime event,” he admits in disbelief.)

Yet in the end, after Petit’s release from custody, after his subsequent awarding of a “permanent guest pass” to the WTC observation deck, what remained was only an intangible memory, an ethereal miracle. The friendships dissolved, all relationships ended on the wire that day. But as Annie put it, “It was beautiful that way.” As Marsh closes on a tender shot of the nearly sixty-year-old Petit still navigating wires like sidewalks in his forested backyard, I couldn’t help but think of Petit’s own words, that “to die in the exercise of passion” would have been every bit as beautiful.