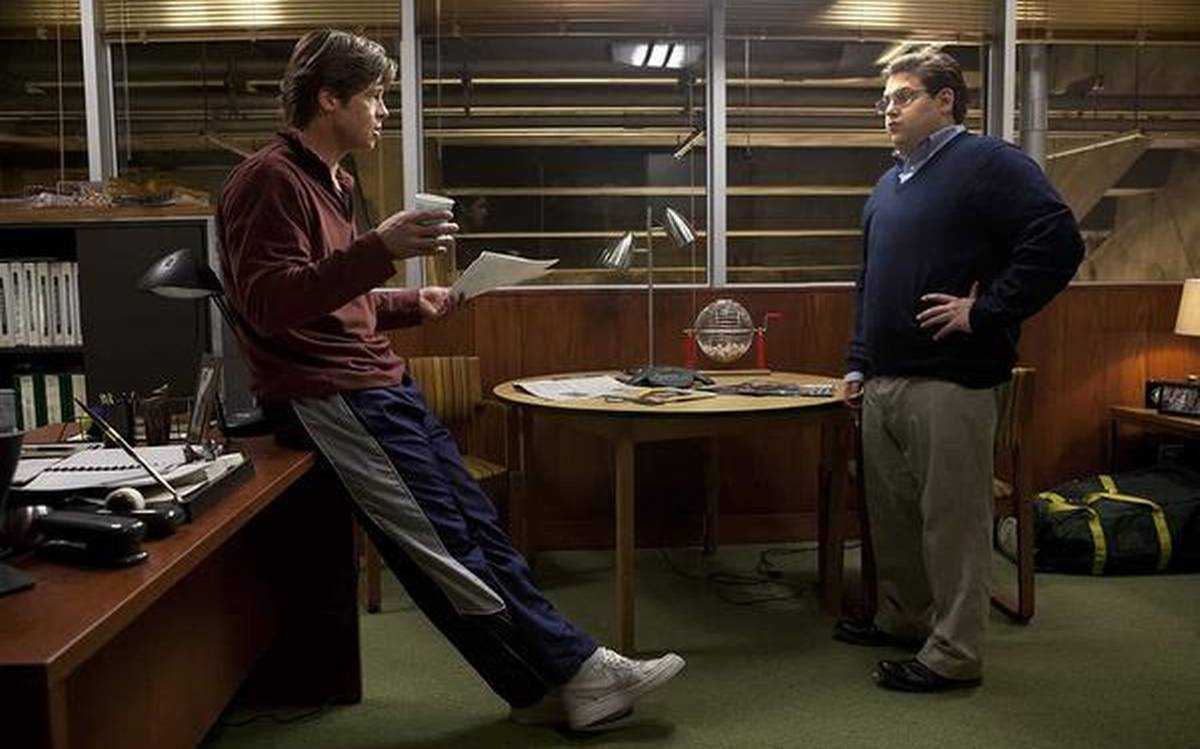 Despite being about as concerned with baseball management as Sports Night was with sports broadcasting, Moneyball still confronts co-writer Aaron Sorkin with a milieu in which he has trouble being putatively witty. (Brad Pitt, as the famously statistics-oriented general manager of the Oakland A’s Billy Beane, at one point hurls a locker-room fixture and listens to it wobble to rest in the corner. “You hear that?” he asks his indolent team. “That’s what losing sounds like!”) Granted, Sorkin’s not the sole auteur of the genre exercise, per se; both director Bennett Miller and second screenwriter Steven Zaillian are ensconced enough in specific iterations of the generic for us to glean their influence. What’s modestly fun to watch, though, is how clearly Sorkin sublimates the rushed, narrative itinerancy of his usually peppy dialogue almost entirely within character motivation.

Beane, much like Mark Zuckerberg, wants not only to win big, but to reinvent the game so he can absolve earlier embarrassments (a failed on-field career and an abortive marriage among them). His loutish agency and willingness to continue losing while experimenting with the counsel of statistician Peter Brand (Jonah Hill) seemingly make up for his inability to express himself. Bean is intense (he can’t bear to watch his own team play), driving back and forth on the Bay Bridge with the radio on (the announcers naturally do a fine job of telegraphing the dramatic specifics of the story rather than the game at any given moment) and brooding with the sun haloing his seriousness. Even after the obligatory big-play climax, he’s unsatisfied: His ambition is as relentless as the loquaciousness of The Social Network’s prologue. Audiences, on the other hand, are likely to be sated until they realize that the film’s ostensibly down-to-earth, human orientation contradicts its central historical truth: that, despite Malcolm Gladwell’s belief to the contrary, intuition can very often be defeated by the precise and mechanical. This is a movie that perversely assigns very traditional histrionics to a non-traditional social success.

The cheapness of Marjane Satrapi and Vincent Paronnaud’s Chicken with Plums might be best understood through the 90-second flurry of tears I experienced in the men’s room after watching it. Some films traffic reckless, tawdry sentimentality while Satrapi and Paronnaud’s sentimentalizes cheapness itself. Concerning a lazily self-destructive musician named Nasser-Ali (Mathieu Amalric) who nurses a broken heart and, more tragically, a broken violin, the movie is a pop-up book of objects; most of them, like the titular dish and a pompously ornate clock purchased for the sake of initiating contact with a woman, are melancholy, but all of them are endearingly flat. The aura of these objects—often an actual CGI halo—forms a vehicle that moves us through the film’s chronological fractures. After Nasser-Ali decides to die, we observe some Unfaithfully Yours-esque suicidal fantasies that elliptically make relevant the history of the protagonist’s family, from his arranged but dutiful wife Faranguisse (a pop-eyed Maria de Medeiros) to his more honorable and politically active brother Abdi (Eric Caravaca) to his flatulent, cheerfully obnoxious children.

Unlike in Persepolis, this content is rendered via live-action means (save for one spritely theoretical anecdote), but the co-directors cultivate a similar emotional distance. Their characters more closely resemble tenuously affixed Colorforms than people, allowing them to blend in seamlessly with the catalogue of objects on display and forcing us to concentrate more on the cadence of the narrative than on the scenario’s potential humanity. But we focus so closely on what seems curious, if superficial, that we don’t notice the love story being developed, nor the flow chart of hand-drawn icons leading us towards devastation. When that devastation finally arrives, it’s something we must glean rather than be swept up by; the clock was bought so that the protagonist might get close to a girl with the conspicuous name of Iran. And yet the material with which Satrapi and Paronnaud fashion their arts-and-crafts exhibit is so hollow and so inviting that we can’t help but hide away our painful secrets in it. The stylistic thinness is finally heartbreaking: Even after we’ve saturated it with our own despondency, it’s not sturdy enough for us to lean on.