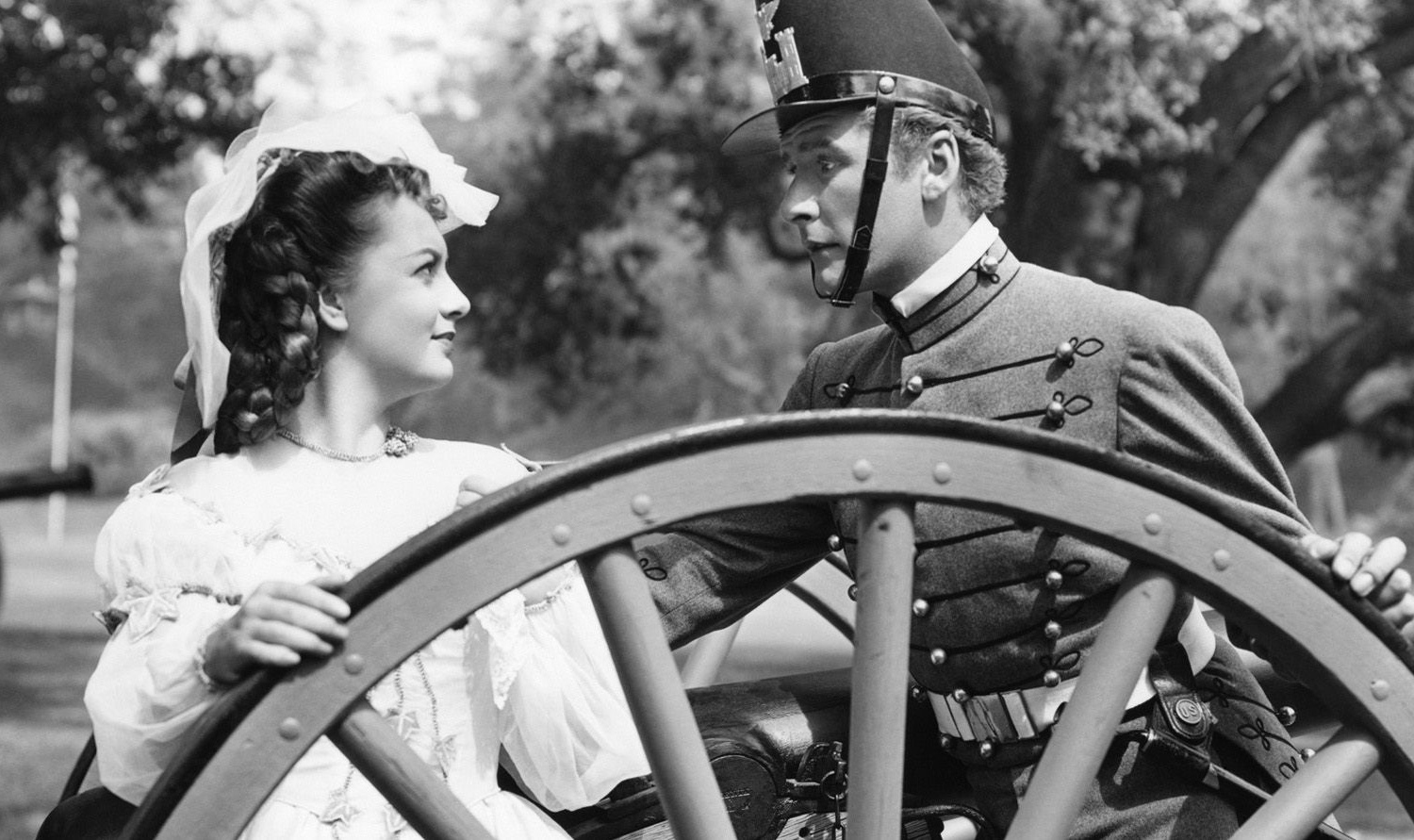 In They Died with Their Boots On, 1941’s Errol Flynn-headlined epic about the life of General George C. Custer, a group of dastardly businessmen—intent on breaking a treaty between the Union and the Sioux by enticing hordes of white men to settle on land earmarked for the Native Americans—promulgate a false rumor that gold is plentiful in South Dakota’s Black Hills. As aficionados of HBO’s superb Deadwood know, such a lie was wholly unnecessary, since the Black Hills were literally teeming with gold during the prospecting-crazy late-19th century. Yet this historical speciousness is emblematic of Raoul Walsh’s loosely-based-on-real-events film, which charts Custer’s colorful career, from his youthful rebelliousness at West Point to his downfall at Little Big Horn, with what can only be described as a relentless interest in lying. Warping Custer’s (and his contemporaries’) motivations and actions to the point of insanity, They Died with Their Boots On delivers revisionist romantic fantasy masquerading as history.

Such inaccuracy was an intentional decision aimed at providing Flynn—by now a worldwide matinee idol—with a larger-than-life military role that would stand side-by-side with his iconic pirates (Captain Blood, Capt. Thorpe) and heroes (Robin Hood). By boasting his legendary wisp of upper lip hair rather than Custer’s bushy handlebar moustache, Flynn immediately makes clear that it is his, and not his character’s legend that’s most important, and despite a strangely off-putting fascination with Custer’s love of onions, which he regularly devours like apples or dessert delicacies, the film proves a comfortable venue for its star’s portrait of braggadocio and bravery. Though not quite as delightfully freewheeling as his performances in The Sea Hawk or The Adventures of Robin Hood, the magnetic Flynn embodies the doomed general with a charming cockiness and flashbulb-bright smile that enliven this handsomely made—but, in contrast to the actor’s prior adventures, more somber—cowboys and Indians blockbuster.

Apparently tired of working with Michael Curtiz (who had helmed his previous seven projects with Olivia de Havilland), Flynn successfully lobbied for Walsh—a director known for manly, visceral genre pictures—to lead the film’s charge. The filmmaker’s skill at rugged, chaotic action is most forcefully felt during the climactic battle against Chief Sitting Bull (a young Anthony Quinn) and his army of angry indigenous warriors—a fight which, after the stateliness of the preceding set-bound action, erupts with down-and-dirty dynamism. Yet the film’s rollicking fun is unfortunately (though not surprisingly, given the period during which it was made) sullied by distasteful racial attitudes, from Flynn condescendingly referring to both a stuttering black waiter and Sitting Bull as “boy” to Gone with the Wind mammy Hattie McDaniel, as the maid of de Havilland’s Elizabeth “Libby” Bacon (who later became Mrs. Custer), once again portraying the stereotypical “scared, superstitious, and subservient” black woman.

Although hardly meant to be taken as factual, the film’s depiction of Custer as a laudable figure of gallant virtue rather than a less-than-noble, somewhat off-putting egomaniac who eagerly sought out his Little Big Horn assignment is nonetheless sometimes hard to stomach, though the self-assured Flynn admirably captures the man’s rampant arrogance (which was, in real life, reportedly so extensive that he anonymously wrote flattering letters about himself to newspapers). Yet even if historical erroneousness intermittently undermines the film’s outlandish attempts at lionization, They Died with Their Boots On endures as one of the finest Flynn-de Havilland collaborations, providing a grand stage for the duo’s playful, poignant rapport. And never were the two finer than during Custer and Libby’s last moments together, a tender goodbye made more heartrending by the fact that the scene also marked the conclusion to one of the cinema’s most dynamic screen couples.

Review: The Hitchhiker’s Guide to the Galaxy