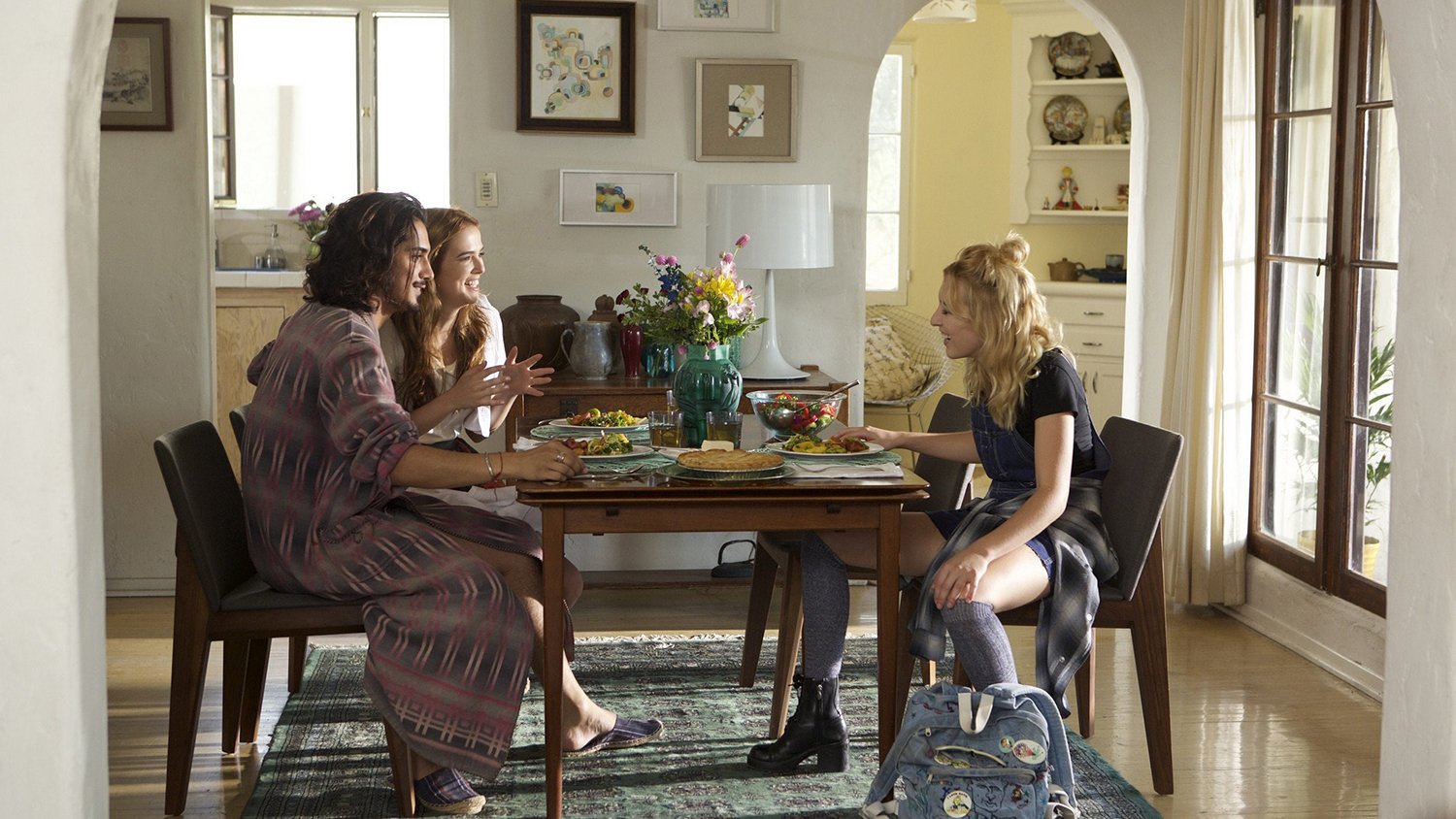 Early in The Year of Spectacular Men, heavy-hearted and insecure college student Izzy Klein (Madelyn Deutch) walks with her younger and much more successful movie-star sister, Sabrina (Zoey Deutch), who notes Izzy’s habit of cradling her journal like it’s “an infant.” Sabrina’s flippant observation points to what’s central to Izzy’s precarious state of mind. Where everyone else has ostensibly figured things out, Izzy is in search of an ending, a sense of closure that’s as aesthetic as it is existential. She’s on the cusp of (barely) graduating and her most longstanding relationship—a dysfunctional one to moody musician Aaron (Jesse Bradford)—has fallen apart, leaving her with an unfulfilled sense of purpose. An X-Files fanatic, she emulates Fox Mulder in believing “the truth is out there.” The film follows her on a year-long journey of romantic relationships—each man apparently more appealing than the last—as she searches for the piece to complete her puzzle of self.

Of course, we know that this will be a foolhardy goal and that Izzy will eventually reconcile herself to her past (much of this has to do with her father’s suicide) and not treat her young life as something to be finished but, as with nature, like buds cyclically bursting with new discoveries. Sabrina seems to be living the good life: followed by TMZ while co-starring with Zac Efron in major movies, and living in a big Los Angeles house with actor boyfriend Sebastian (Avan Jogia). But her happiness is superficial and emotional development stunted. The same with their mother, Deb (Lea Thompson), who’s embraced an all-smiles New Age outlook with “soul walker” girlfriend Amythyst Stone (Melissa Boloña). The cracks in the more stable and settled lives around Izzy become increasingly apparent throughout the year.

The men Izzy bounces between are, with one exception, creatives. That her early-in-the-film relationship with an actor, Ross (Cameron Monaghan), is delimited to flirtatious rehearsals of a scene between Bottom and Titania in A Midsummer Night’s Dream reinforces an unsteady balance between real life and fashioned performance, with Shakespeare’s fanciful plays within a play and dreams confused with waking existence paralleling Izzy’s discombobulation. The love scenes with her partners, containing a laundry list of embarrassments, are presented with refreshing frankness—bizarre fetishes, profuse sweating, and premature ejaculation, but not played for ridicule, considering that Izzy is more insecure than her lovers. The anomaly is skiing instructor Mikey (Zach Roerig), differentiated from the film’s other men by his realness (Sebastian drunkenly comments on their would-be affinity, “You save lives, and I’ve played people who save lives”), and with whom Izzy has the most honest discursive exchange, however brief.

The blurriness of art and life is in The Year of Spectacular Men’s pedigree: Madelyn Deutch—who also wrote the film and much of its indie-pop score—and Zoey Deutch are real-life sisters, while Thompson, who makes her directorial debut here, is their mother. The film is the collaborative work of a family rendering real-world foibles of a showbiz existence into entertainment. (In-jokes abound, like Sabrina’s clandestine relationship with Zac Efron, a reference to Zoey Deutch’s role as Efron’s love interest in Dirty Grandpa.)

While the elder Deutch has a magnetic presence (the expressiveness of her face feels like it’s ever-blossoming, serving the theme of the film), The Year of Spectacular Men collapses on the crutch of hackneyed narration and, most especially, constant music cues that formally undermine the ripe banter between Deutch and her male co-stars. The actors playing the “spectacular men” otherwise do fine work, particularly Braun as a filmmaker who carries a tape recorder into which he whispers all the things that he can’t bring himself to say in real life. Deutch’s songs, ironically, obfuscate the allure and richness of her character and performance, as her script strays from wry observational humor and gradually drowns in the sludge of platitudes.

In the end, though, it’s all about the journal that Izzy cradles like an infant. The details of Izzy’s life are fashioned into prose, aspiring to be a finished aesthetic object to be exhibited and assessed as any work of art. This is reminiscent of the heroines of Oscar Wilde’s The Importance of Being Earnest, who go so far as to record their private moments in diaries designed for eventual publication. Wilde’s play has a backstory reinforcing this tension between life and art, where a male infant is placed in a handbag and a “novel of more than usually revolting sentimentality” is placed in the infant’s carriage. That description of the novel unfortunately applies to what becomes of Izzy’s life and The Year of Spectacular Men itself, as its free-floating ironic whimsicalness is jettisoned in favor of thudding serenity-now seriousness.