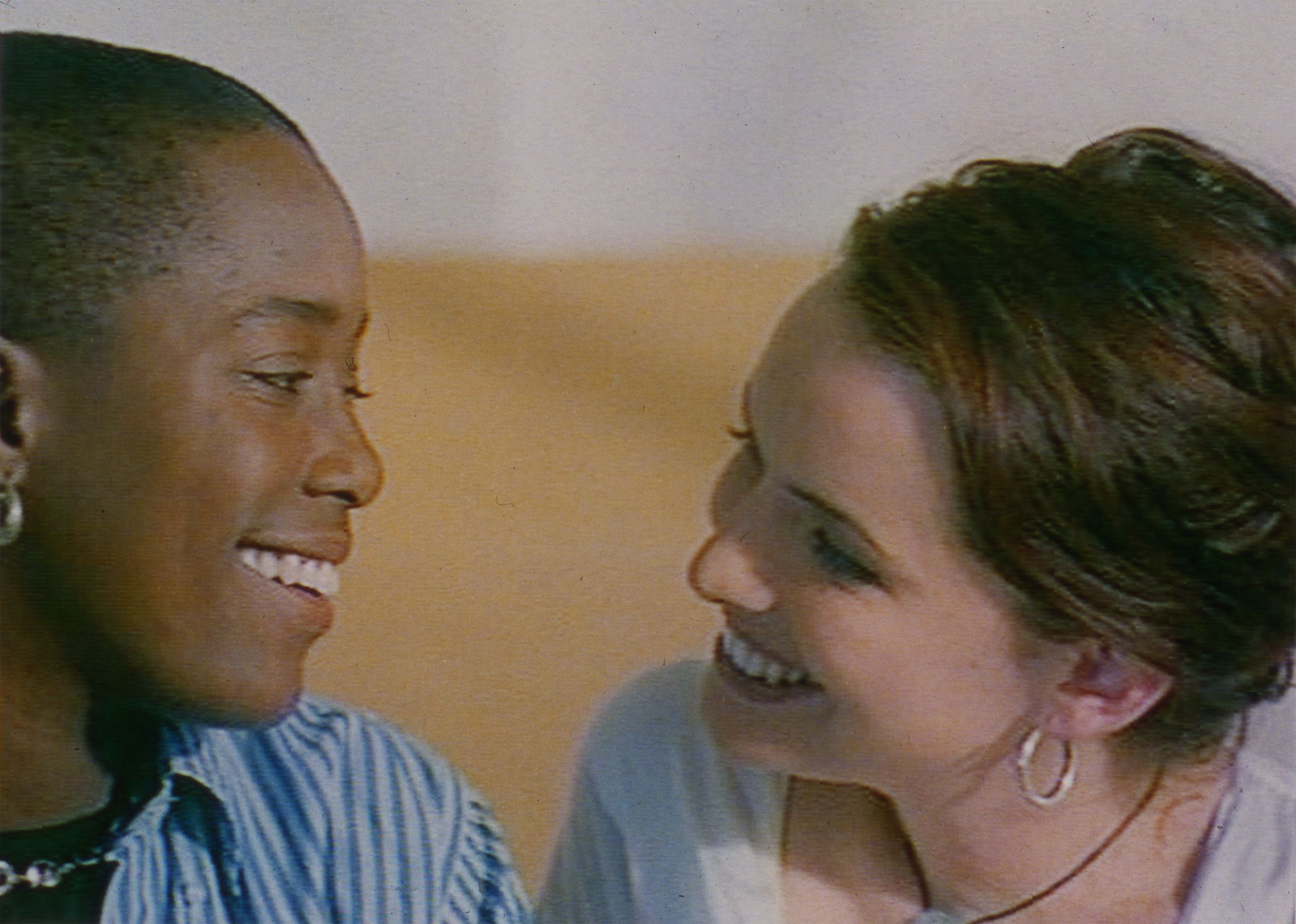 The tension between uncovering hidden aspects of film history and respecting the lives of those contained within it form the undergirding conflict of Cheryl Dunye’s The Watermelon Woman, a film of such multitudinous interests and storytelling pursuits that its unfolding replicates the ecstasy of newfound romance. The film’s crux, beyond the blossoming lesbian relationship at its core, is Dunye’s aligning of hidden historiographies with the hassle of dating—of searching for something (or someone) that, at the surface, cannot be immediately seen with the naked eye.

Dunye first establishes the problem of incomplete histories as Cheryl (Dunye) and Tamara (Valarie Walker) debate the value of, as Tamara puts it, watching “mammy shit from the ‘30s.” They do so from behind the counter of a Philadelphia video store, where their employ is less driven by cinephilia—though Cheryl clearly knows her shit—than economic necessity. Unlike Kevin Smith’s Clerks, which uses dead-end jobs for ironic, low-stakes altercations between its characters, The Watermelon Woman views Cheryl’s daily grind as a complex formation of potentially conflicting passions and motivations that has the potential to simultaneously reveal the past and shape her future.

The film’s title refers to a black actress during the 1930s whose billing name was “the watermelon woman.” As an aspiring documentary filmmaker, Cheryl combs through films from the silent and pre-Code era in search of such “mammy” types, and becomes obsessed with uncovering not only the woman’s real name, which she discovers is Fae Richards, but also more about her life. Dunye establishes Cheryl’s intrigue with a sleight of hand that plays with the divide between fact and fiction, so that the film suggests Richards is an actual person when, in fact, she’s a fictional character conceived by Dunye.

Yet The Watermelon Woman plays Cheryl’s search for evidence about Richards’s life as if it will teach the viewer about actual dimensions of film history. By playing the lead role, Dunye makes no distinction between these fabrications, her character’s sexual preferences, or even herself as both a filmmaker and a lesbian: Each of these elements exists along a continuum of varying shades of verisimilitude so that the newness of seeing black, lesbian women on screen is paralleled by Dunye’s creation of a black actress from a past era. So little is known about black women who were acting in the ‘30s, whether in their personal or professional lives, that the film’s narrative liberties excel past a simple play with its essentially mockumentary form.

On a conceptual level, The Watermelon Woman takes the historical suppression of black actresses and filmmakers and plugs it into a present tense, where Cheryl is infatuated with Diana (Guinevere Turner), a white woman who’s just moved to Philly from Chicago. Tamara contests Cheryl’s choice in women, specifically white women, which leads Cheryl to counter: “Who’s to say dating somebody white doesn’t make me black?” Cheryl’s rebuttal could easily be altered to speak for Richards, and for Dunye’s entire film, to read: “Who’s to say being fictional doesn’t articulate a truth?”

These dynamics of identity politics and historical recovery are complicated even further when Cheryl visits Camille Paglia, a (real life) professor at the University of Arts in Philadelphia, who professes the mammy archetype to be a powerful “symbol of abundance,” particularly within Italian culture. Paglia’s testimony at once brings a bit of historical clarity to Cheryl’s research, but it also extends the pathway to reaching a final destination of certainty. Turns out, the more Cheryl learns, the more complex the matter becomes.

The Watermelon Woman champions recovered knowledge as the primary means to reverse the systemic erasure and closeting of gay histories. As Cheryl says near the film’s beginning, her films “have to be about black women, because our stories have never been told.” It’s doubly remarkable, then, that The Watermelon Woman should construct a fictitious backdrop of its own in place of an actual, overlooked one. In doing so, Dunye both complicates the historicizing process and makes a trenchant statement against any narrative that either naturalizes its subject matter or believes too haphazardly in its own revisionist significance. It’s the combination of past and present—a cinematic stabilization of historical necessity and contemporary lesbian romance—that gives the film its singular identity.