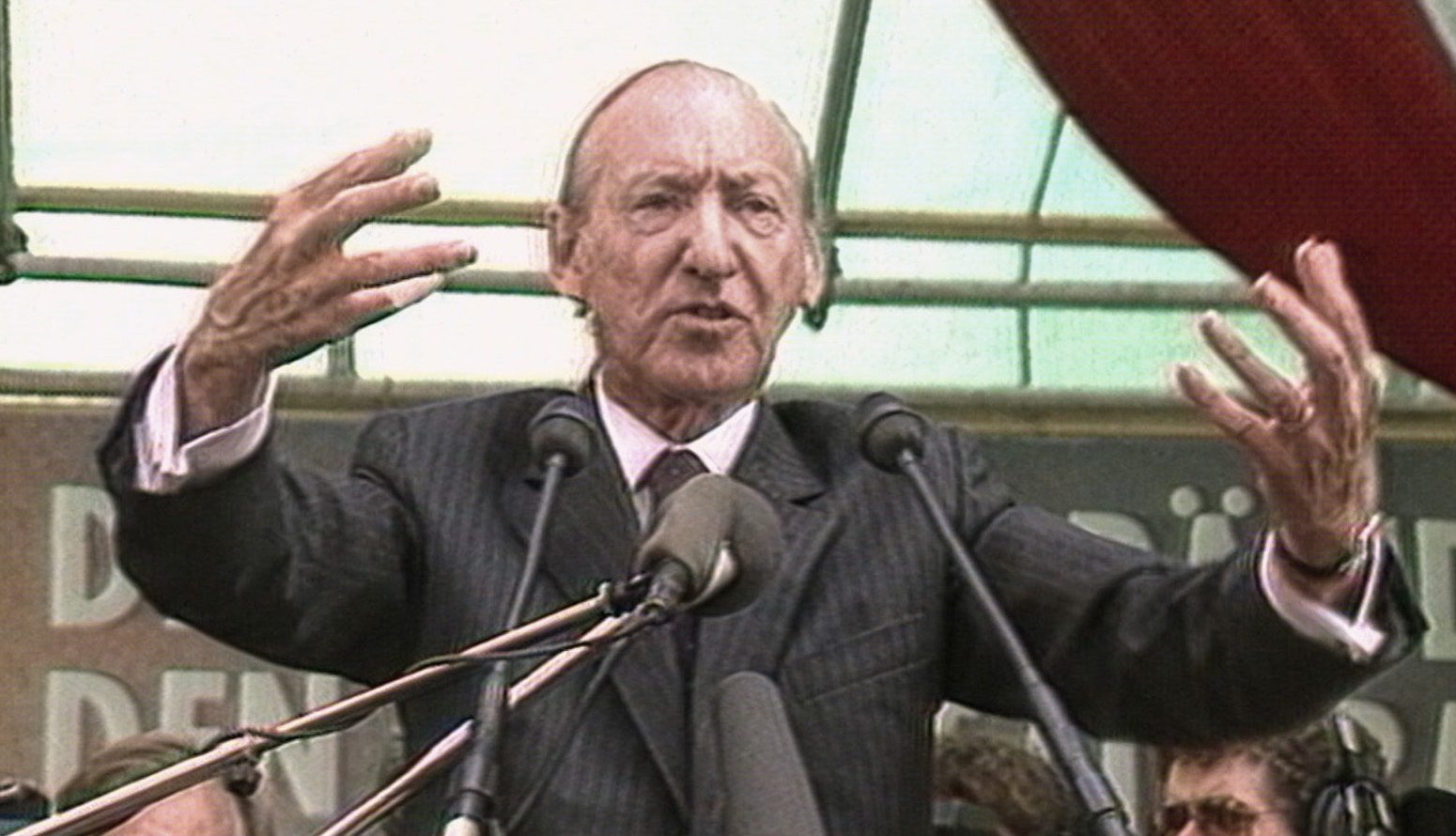 “We were honest,” says Kurt Waldheim, former U.N. secretary general and candidate for the Austrian presidency, to a crowd of supporters in April 1986. Incredibly, Waldheim is referring to a time when, as an officer in the German Wehrmacht, he was on the staff of a convicted war criminal and was present for the SS-led deportations of thousands of Jews from the Yugoslav city of Salonika (now Thessaloniki in Greece). As presented in The Waldheim Waltz, the referent of Waldheim’s “we” is unclear: Does he mean himself and his immediate compatriots, the entire Wehrmacht, or the Austrian nation? The ambivalence is illustrative, because for filmmaker Ruth Beckermann, Waldheim is the perfect representative of a nation that in the decades after World War II misleadingly portrayed itself as “Hitler’s first victim.”

In the interviews and speeches presented in the film, Waldheim frequently defends his service during WWII by insisting that, because thousands of other Austrians were in similar positions, his work was proper and even honorable. Whether or not his alleged participation in war crimes was out of the ordinary for an Austrian officer, the notion that anyone could even behave honorably while waging a genocidal war is the almost laughable absurdity at the core of these repeated and mendacious denials. Waldheim claims that he was merely a dutiful soldier, and that the first he heard of any deportations in Salonika was in the 1980s. Beckermann undercuts these prevarications with snippets of newscasts from the era, which demonstrate that the city square where Salonika’s Jews were herded onto trains is perfectly visible from Waldheim’s former office. The former army captain trips over himself as he dances the rhetorical waltz of the title, inventing new ways of explaining his lack of detailed memory for events that occurred between 1941 and 1943.

Beckermann was there in 1986 for the anti-Waldheim protests in the Stephansplatz, Vienna’s central square—and she had a camcorder with her. Her grainy, black-and-white images capture the frontlines of a cultural war between those insisting on remembrance and accountability and an old guard living in denial. The footage reveals the continuities between the Third Reich and Austria’s Second Republic, masked for years by Austria’s myth of victimhood. Viennese police destroy her group’s political signs and bully the protestors, and right-wing Austrians emboldened by Waldheim’s refusal to acknowledge guilt emerge from the crowd with brazen anti-Semitic outbursts.

Rather than this firsthand record of the protests, much of The Waldheim Waltz consists of carefully curated archival television footage, with Beckermann’s soft-spoken voiceover giving it a personal, essayistic tone. The film introduces us to Waldheim through his hands, which during political speeches he would characteristically extend before him in a semi-circle. “I remember his hands,” Beckermann intones over the footage. “He seemed to want to embrace, to envelop his people,” she continues. The elegant, grandfatherly gesture she emphasizes here is indeed distinctive but also off-putting, as there’s a gnarled stiffness to Waldheim’s long fingers that feels sinister. The effect is, to deploy a term famously elaborated upon by a Viennese Jew, uncanny.

One may leave The Waldheim Waltz having expected more specifics about Waldheim’s involvement in war crimes in Yugoslavia and Greece. Indeed, more conclusive proof than is presented here exists: In 1987, a 230-page report by the U.S. Justice Department detailed Waldheim’s probable involvement in the transfer of civilians to the SS for slave labor, the notoriously brutal reprisals against Yugoslav civilians for attacks on Nazi forces by guerilla partisans, and the deportation of Salonika’s Jewish population to death camps. Beckermann’s film, however, is focused less on putting Waldheim on trial and more on contemplating his transparent mendacity and its implications for collective remembrance and responsibility—with clear implications for a global society in which the right is once again on the rise.

In the ‘80s, Beckermann points out, people’s attention turned to the lingering remnants of Nazism when Claude Lanzmann’s Shoah shattered popular presumptions that the horror had been swallowed up by the passage of time. Given the time at which it arrives, her film is surely also meant as a wake-up call. Despite Beckermann’s contemplative, even-tempered tone, The Waldheim Waltz gradually builds outrage at the subterranean persistence of fascism in postwar politics. At one point, the constantly smiling future president claims of his work under Nazi war criminal Alexander Löhr that “it was a perfectly correct, honest occupation.” It’s enough to make your fist clench in fury.

Review: On Her Shoulders