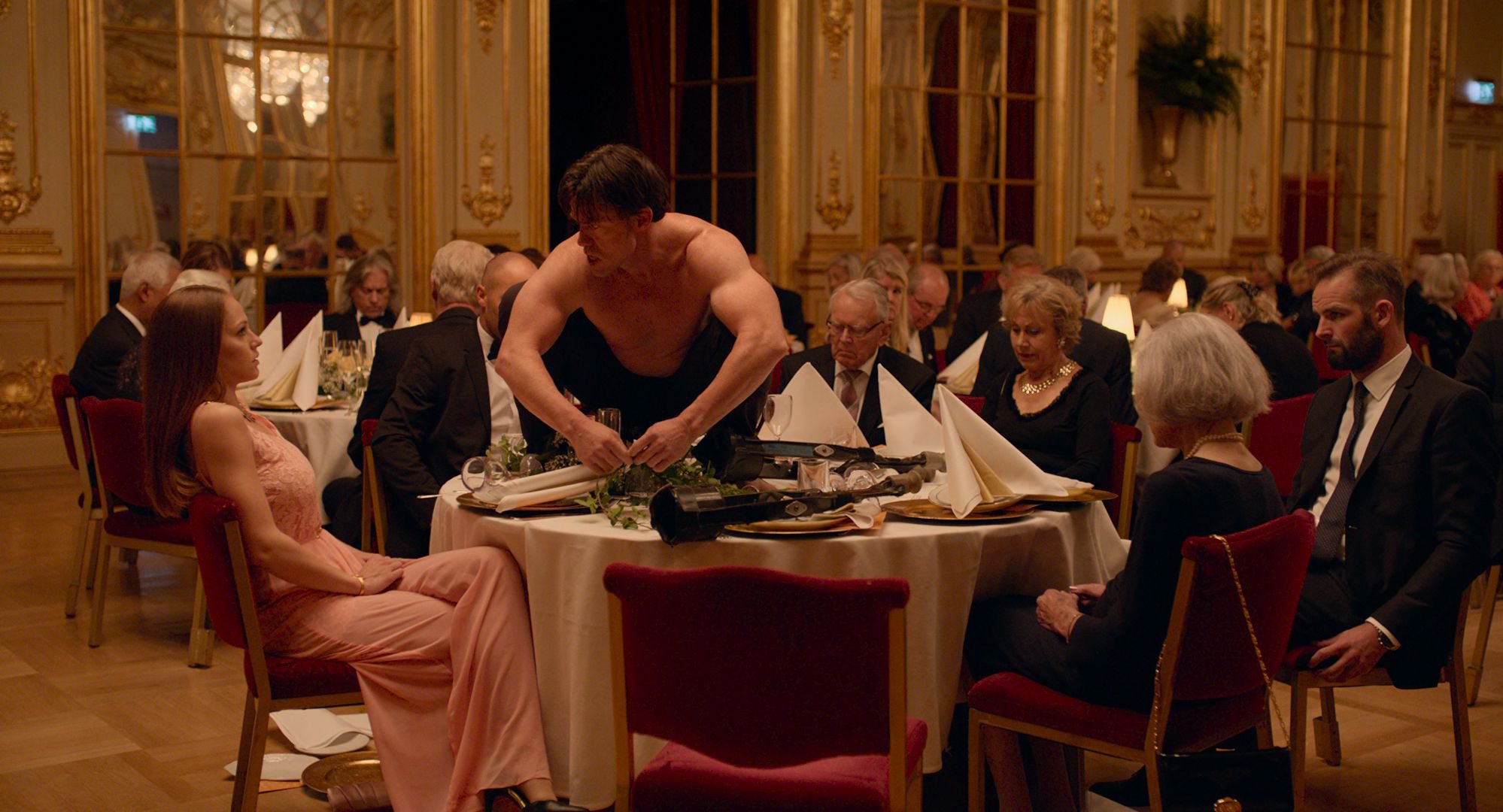 After scrupulously analyzing the rippling effects of a man’s moment of human weakness in Force Majeure, Ruben Östlund has adopted a more panoramic view for The Square, edging his latest film closer to the vignette-driven narrative terrain of 2008’s Involuntary. Juggling the handful of interconnected tribulations that overwhelm Christian (Claes Bang), the curator of a reputable Stockholm contemporary art museum, in the run-up to the opening of a new relational art exhibition called The Square, the film grabs at a pinwheel of hot-button social topics including class privilege, liberal guilt, urban poverty, viral marketing, and mutually reinforced passivity in the face of mounting inhumanity, winding up with something simultaneously overstuffed and undercooked. While Östlund’s mastery of visually amplifying social unease is still very much intact, he’s partially undone here by his own thematic ambition, which, in scene after exquisitely staged scene, threatens to put too fine a point on otherwise thrillingly indeterminate situational comedy.

The film’s intricate plot hijinks kick off with a virtuosic set piece that follows with a moving camera as Christian, burying his head in his phone like all the well-dressed young professionals surrounding him on their morning commutes, falls prey to a pickpocketing scheme. In a stroke of ingenuity, Östlund triggers the theft at the precise moment when he’s trained us to direct our attention off screen, a favorite comic-suspenseful strategy of his that in this context heightens awareness of the cinema screen itself as another manifestation of the titular square. In fact, the sophistication of the technique in this scene is almost enough to distract from the fact that the theft, which requires three game performers and total confidence in the gullibility of their victim, might charitably be said to stretch plausibility.

Alas, the worse offender as it pertains to dramatic logic comes in the series of events that follow, wherein Christian, seemingly a competent mouthpiece for the institution employing him (or at the very least a man seasoned in the art of public performance), adopts the élan of a frat bro alongside a younger museum employee, Michael (Christopher Læssø), in concocting, then executing, a ludicrous plan to retrieve his stolen belongings. Having narrowed down the whereabouts of his iPhone to a low-income high rise across town using modern means, the two giddily craft a threat letter over glasses of wine in anticipation of slipping copies of it into every apartment in the building. And for a moment, as Justice’s “Genesis” blasts over the speakers of Christian’s Tesla and the men make their way to the high rise, you’d think you were watching James Franco and Seth Rogen on one of their on-screen benders, blissfully not giving a shit about any repercussions.

Christian, however, cares very much about repercussions, and generally appears outside this uncharacteristic infraction to be neurotically concerned with the merit of his reputation. After all, only a curator deeply fearful of risk would so emphatically sanction and showcase an artwork as insipid as The Square, which consists of a four-by-four-meter zone billed as a “sanctuary of trust of caring” that, once entered, is alleged to grant the occupant the compassion of all passersby. It’s a riff on the bystander effect, a sociological phenomenon that Christian seems bent on combating in his daily life, albeit less out of a genuine concern for others than a need to uphold the moral standing that a man in his professional position is meant to possess. (He’s often framed within various boxes, in fact, as if to alert the audience to how he fails to fulfill The Square’s utopian vision on a daily basis.)

Östlund’s film juxtaposes Christian’s begrudging acts of philanthropy—in one scene, he perceives that a woman oversteps her bounds when begging for food, and so he vindictively orders her a sandwich with the onions she doesn’t want—with scenarios in which the stiff decorum of the insulated art-world milieu is upset by impulsive behavior. Deadpan gags, frequently scored to Yo-Yo Ma and Bobby McFerrin’s rendition of the Bach-Gounod “Ave Maria,” pile up: a swarm of museum donors shuffle toward complementary food platters before the chef has a chance to finish describing the offerings; a pair of patrons backpedal away from a conceptual piece as quickly as they enter the room; a man with Tourette’s barks obscenities during a Q&A with a visiting artist (Dominic West). Östlund shares his countryman Roy Andersson’s knack for placing his static camera in just the right corner of the room for maximum comic effect, but the (truly reactionary) joke is fundamentally the same across the board here: Deep-pocketed art-world schmoozers talk a big game but are silly and empty to the core, and especially so when submissively tolerating esoteric hack art in the interest of perceived political correctness.

This latter idea gets thoroughly worked out in a lengthy centerpiece scene that plays like some durational cousin to the bit in Monty Python’s The Meaning of Life in which a balloon-shaped glutton gorges himself to self-detonation in a five-star restaurant. As in that classic piece of garish screen comedy, Östlund focuses on a black-tie dinner party as a locus of haughtiness, a scenario in which guests will endure anything up to extreme obscenity so as to keep up appearances. When the museum’s scheduled pre-meal entertainment involves setting loose an ape impersonator, Oleg (Terry Notary), with an overzealous commitment to his craft, these pretensions of tolerance are pushed to their breaking point. The performance artist starts getting handsy with audience members, jumps on tables, and eventually assaults a woman, at which point the men in the room take charge—albeit not with diplomacy but violence. Patiently staged, and equal parts absurd and discomfiting, the scene represents the film’s apex, and yet it’s still reducible to a rather crude thesis about the rehearsed dispassion of the upper classes.

Such snideness wasn’t necessarily absent from Force Majeure, but that film complicated its own ideas as it went along, and ultimately funneled toward existential terrain rather than simple anthropological snickering. By contrast, The Square merely adds more easy targets to the mix as its yarn increasingly thickens. The inclusion of a subplot about a pair of millennial creatives who devise a hilariously distasteful video ad for The Square gets at some dismal truths about the psychology of contemporary marketing and the vernacular of high-end creative meetings; it also functions as one of several instigators in Christian’s ultimate comeuppance, as does a backfiring one-night stand with an American journalist, Anne, who’s played by Elisabeth Moss. But if the best that can be said for a film is that the arenas of its cruelty are sufficiently researched, then “satire” feels a little too generous a label.