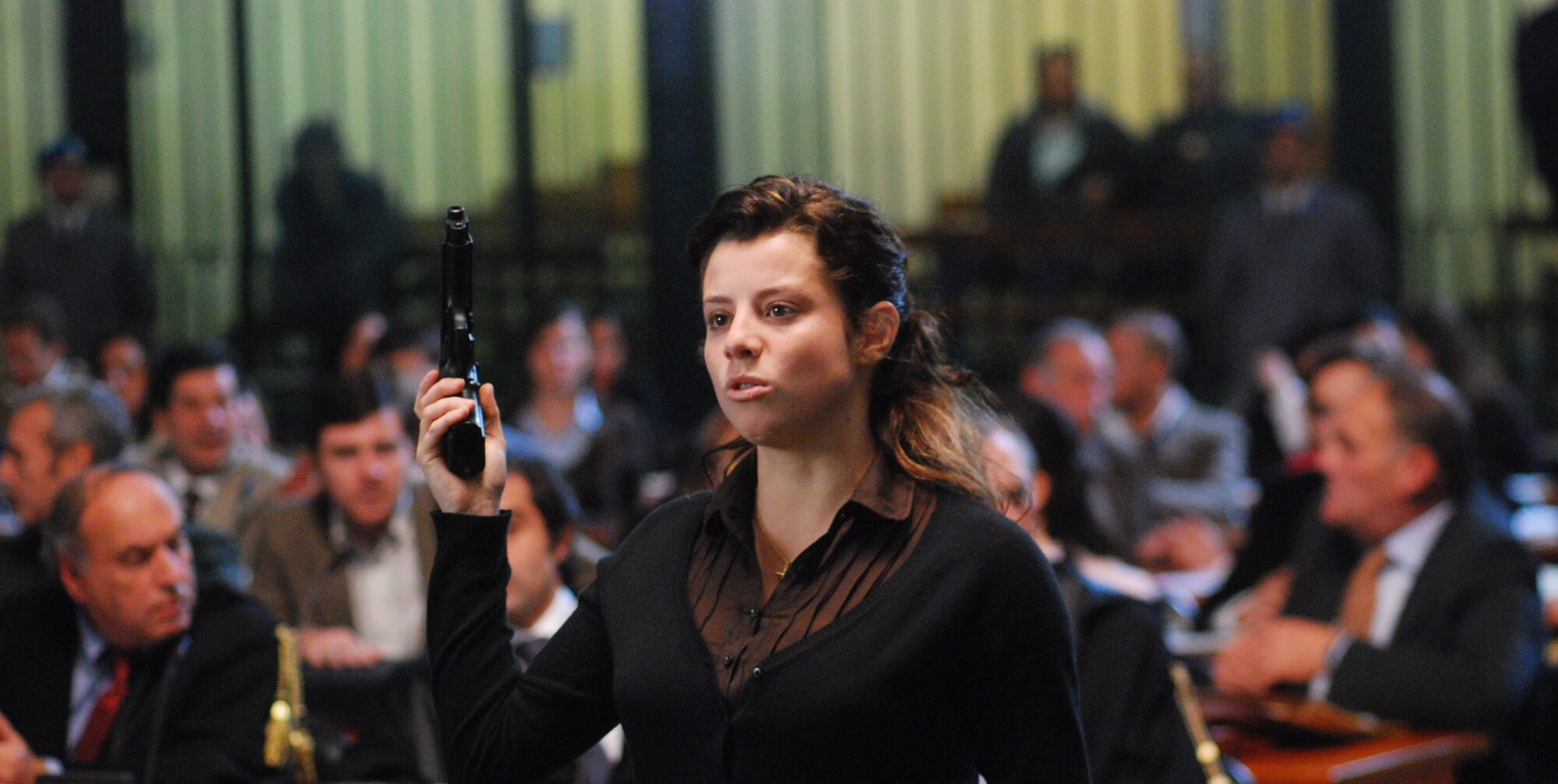 Seemingly inflicted with the same identity fissures experienced by its mafia-victim heroine, Marco Amenta’s debut, The Sicilian Girl, is uncomfortably ensconced in the very old-school crime-family tropes its social message intends to undermine. The inauspicious saga begins in the gold-toned countryside of Italy circa 1984, where girls like Rita (Miriana Faja) score their mothers’ sundried bedsheets with glinting pasta sauce and blow raspberries at faux-dignified, state-mandated law enforcement agents from under the aegis of Daddy’s sleeve-resistant arms. A few far-fetched events posit Rita’s father, Michele (played with likeably avuncular calm by Marcello Mazzarella), as the Last Honest Don, a stereotype I’d almost forgotten how to abhor. Michele’s unflappable devotion to “family values” is such that he adamantly opposes venturing into new trends of narcotics trafficking and routinely defends the starving honor of the “real Sicily” before throngs of festive citizens—and when a local peasant’s farm is brutally razed by the competing Don Salvo (Mario Pupella), the broken man weeps for vengeance into Michele’s shoulder.

But before we can question too strenuously a micro-environment of organized crime that hadn’t caught on to the potential profits of the drug trade until the 1980s, Michele is dispatched by an anonymous fusillade in a magic hour-washed town square; retaliation tactics developed over the next few years are then cut short by the murder of Michele’s son and successor (Carmelo Galati). Rita, now a young woman (Veronica D’Agostino) in the 1990s, is thus compelled by her blood-defending upbringing to seek revenge, but finds that justice can only be sought though collusion with hitherto impotent police—represented with metaphorical aplomb by a balding, pot-bellied, unnamed judge (Gérard Jugnot).

The remainder of the plot alternates between sullenly lit courtroom drama and attempts on Rita’s life that unfold like yellowing and crisping mafia-movie tutorials: perilous negotiations are often wind- and rain-swept, goons from opposing families skulk venomously in darkened corridors, and swarming flocks of gnat-like birds punctuate dramatic gunshots via conspicuous, sky-directed cutaways. The clumsiness is such that one wants to intellectualize a rhetorical purpose for the awkward close-ups of bullet cartridges clicking into place and dark brown eyes blinking with trepidation. (Is Amenta suggesting that depictions of violence are just as futile and senseless as crime itself—to say nothing of his rendering’s pedestrianism?) Still, the film’s few purple flourishes of sadism feel unsettlingly out-of-place with the “post-mafia” mentality Amenta attempts to espouse; digitally filtered flashbacks to hog-tied family transgressors strangling themselves with worm-like undulations appear like poetic, and editorial, opportunities squandered with blasé camerawork and editing arrhythmia.

As its title might suggest, The Sicilian Girl is undoubtedly Rita’s journey (a not-quite framing device shows her scribbling insider’s details about mob affiliations and schemes in her diary, which eventually becomes an 11th-hour plot mechanism) and D’Agostino’s transformation from neurotically frumpy woman-in-double-mourning to Catholically-charged Erin Brockovich-style court hero provides the film with an actorly, charismatic anchor. After the death of her brother, her perpetually black-wrapped, Italian flab suggests comparisons with Giancarlo Giannini’s waddling, clucking, and pecking wife in Swept Away (albeit in a slightly more svelte iteration); but submerging her being into the legal mechanics of her ancestors’ shadowy business gradually allows her to liberate herself with candied shades of lipstick and tightly woven dress fabric that confidently outlines her curves rather than blimping them.

While Rita and her abusively disappointed, mafia-widow-’til-death mother (Lucia Sardo) maintain a modicum of watchability, however, Amenta mistakenly interprets his story’s human-rights value as verisimilitude; we’re shown footage of the actual Rita Atria, who similarly sough retribution for her patriarch’s slaughter in the Italian courts, directly before the end credits, implying a specious one-to-one correlation between her factual life and the fiction we’ve just witnessed. And the liberties Amenta has taken with Atria’s history, easily discoverable through casual online research, are maddening not because they fiendishly distort truth for the sake of character apotheosis, but because they erect needless contrivances upon far more subtly fascinating details. (An example: Rather than being a local maxima of rural affluence as suggested by the film, Rita’s father was a shepherd. Then again, the requisite designer vests and draped trench coats of mafia attire may lose a bit of dark mystique, and more than a few buttons, if worn while milking goats.) These blunders aren’t quite deserving of vitriol, yet that, too, oddly seems like a shortcoming: For all its ostensible delving into the immutable psychology of hot-blooded vendettas, The Sicilian Girl fails to inspire, or express, cinematic passion.