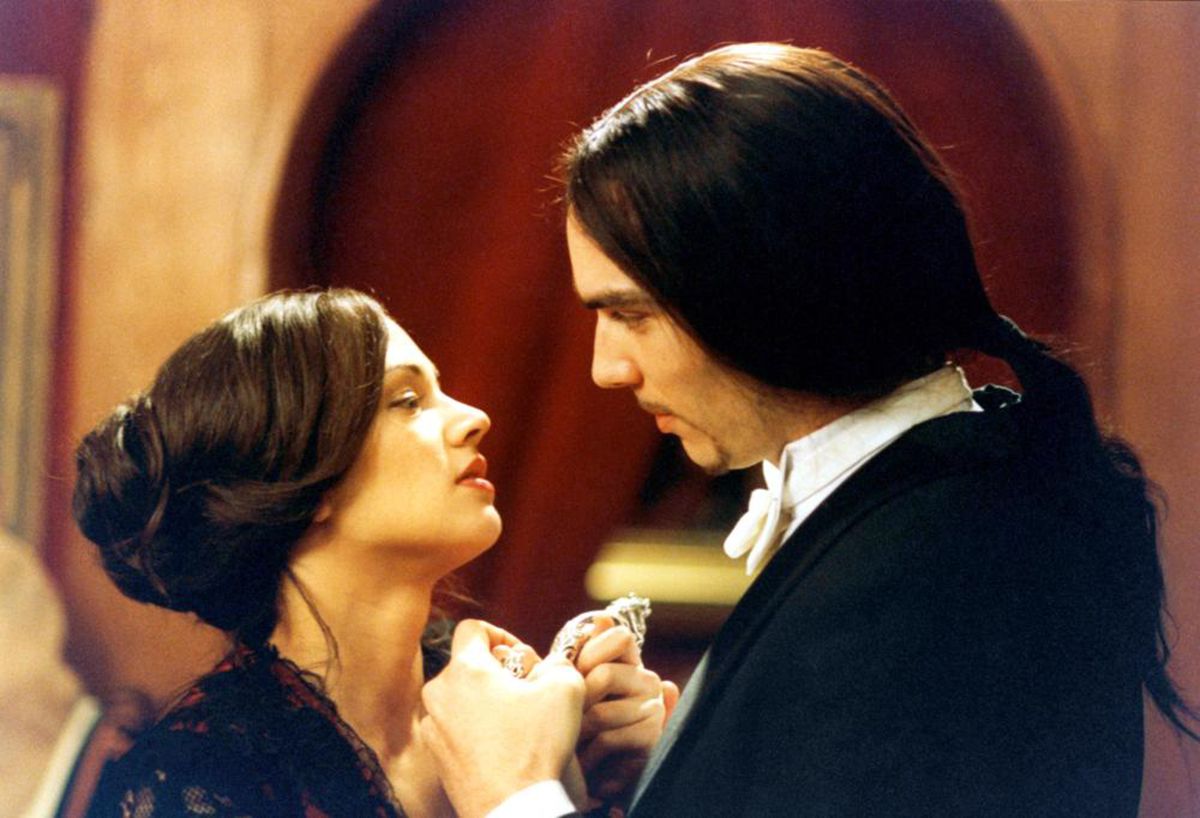 Discussing Opera in her book Broken Mirrors/Broken Minds: The Dark Dreams of Dario Argento, Maitland McDonagh observes: “No horror film called Opera can escape the suggestion that it’s somehow inspired by the classic Phantom of the Opera, and there is some connection here. In addition to recalling the film (the 1943 Claude Rains version) from his childhood, Argento has said that there were only two classic horror films he was ever really interested in remaking, and Phantom of the Opera is one of them (the other, Frankenstein, got to the script stage during the ‘70s).” Dario Argento’s realized this lifelong desire with the release of 1998’s Phantom of the Opera, a film Argentophiles wish he’d kept under wraps. While Gaston Leroux’s classic tale of terror at the opera may have begged for Argento’s touch, this horror remake is a spiritless hack job. If watched side by side with Opera, the film’s failures are far more apparent, from its PBS-style art direction to the curious and passionless attention for on-screen mayhem. Asia Argento makes her third appearance in one of her father’s films. She stars as Christine and completely strips the classic heroine of all her passion. Asia’s broken English, dubbed in The Stendhal Syndrome, is on full-display here and unfortunately renders Christine a frumpy everywoman rather than the diva Gaston Leroux imagined.

The film takes place in the late 1800s and begins with a banal opening sequence (think Moses meets Batman Returns) depicting a couple setting their young child adrift in the sewers of Paris. Aboard a sturdy basket, the young child is saved by a loving horde of red-eyed rats. These sewer rats seemingly reared the Phantom, though you wouldn’t know it from his perfect English. Then again, it makes sense. Why else would he so voraciously want to eat away at human flesh and do away with the opera house’s exterminator? The Phantom (Julian Sands) watches Christine as she practices her arias on stage. Phantom of the Opera is a mess from the start: the transitions between scenes lack passion and Asia’s lip-syncing is ridiculous at best. Even worse is the Phantom’s loveless relationship to Christine and the film’s perfunctory pacing—there’s little logic to the way the Phantom travels through the opera house’s cavernous tunnels and hallways. The bloodshed is Fangoria-lite and the supporting players are thoroughly obnoxious. From Christine’s seamstress to a pedophiliac gentleman, the film’s character archetypes are weird for the sake of being weird.

Nadia Rinaldi plays the film’s overweight diva, a cartoonish “fat cow” sidelined by laryngitis. Though Argento is known for actively toying with camp, Phantom of the Opera’s campiest moments seem unintential. The Phantom rips Carlotta’s bodice and scratches one of her plump breasts—Sands, Rinaldi and Argento play the scene for cheap laughs. The film’s most blatant offense is its utter disregard for history. The Phantom’s emergence from his secret lair is whimsical yet nothing is ever at stake here. His love scene with Christine is worthy of Showtime’s “Red Shoe Diaries” while Christine’s affections for her underground lover are remarkably passionless. Falling in and out of love without much sense, Christine never contemplates the implications of a romance with the Phantom. There are secrets to break in all of Argento’s films. There’s nothing to decipher in Phanton of the Opera, a hapless failure that cold pass for a second-rate B movie that went straight-to-video. After the unfulfilled promises of Trauma and The Stendhal Syndrome, The Phantom of the Opera seemingly signaled the demise of a great auteur.