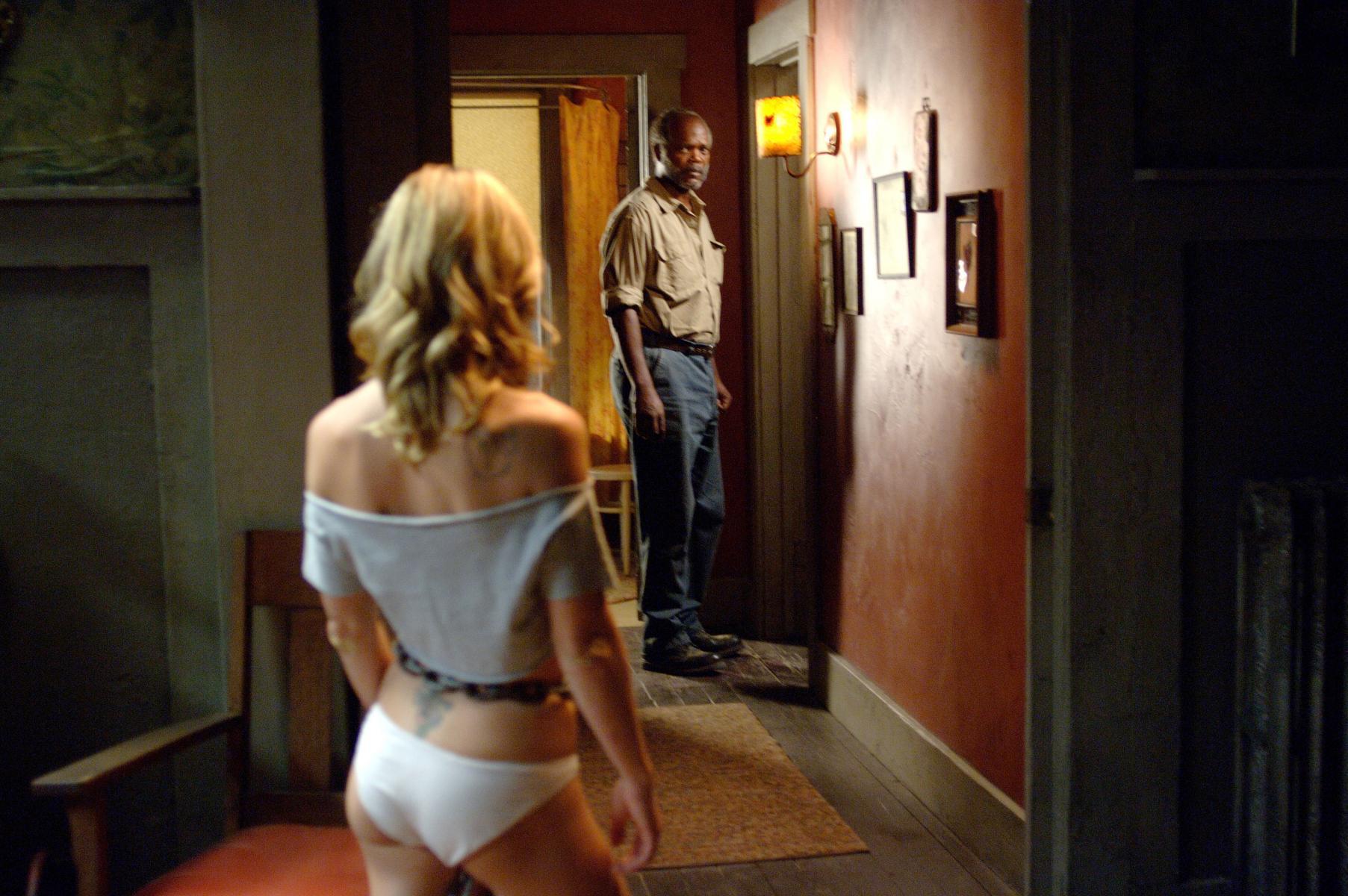 In Black Snake Moan, Samuel L. Jackson bathes Christina Ricci and they don’t end up having sex. Ricci’s character is not a paraplegic. She needs no help reaching those hard-to-reach places. And there is no indication that Jackson’s character suffers from erectile dysfunction or blindness. In fact, he’s so heartbroken over a divorce and so wound up with sexual frustration that he strums the blues guitar the way you’d caress your lover. But despite having chained and imprisoned Ricci’s nymphomaniacal character Rae in his home for several days, forming a genuine lonelyhearts bond with her over Southern cuisine, Blues music and lost loves, he wants nothing more than to get Rae’s shoulder’s Zestfully clean. See, he’s a God-fearin’ man; he only wants to help Rae come to terms with the history of abuse that provokes her reckless promiscuity. Despite the deranged, combustible chemistry that has developed between Rae and Lazarus (Jackson) in the Bluesman’s backwoods love shack, he sees her more as the daughter he never had. Sex? Lawdy, no. Jus’wouldn’t be right.

Do I really need to get into how this plays out? A.O. Scott gave us the whole story in an alternate title: “Chaining Miss Daisy to the Radiator in Her Underwear.” Lazarus and Rae become everything to each other but lovers, and, once they’ve helped each other gain insight into their problems, pair off with age-and-race-appropriate mates. Buh-bye. It’s the parallel-universe Monster’s Ball. Instead of hot, sweaty miscegenation arising out of a dramatic situation that didn’t ask for it (Billy Bob Thornton fucking Halle Berry’s pain away), Black Snake Moan gets sloppy drunk, cries out for apocalyptic sex and then soberly zips its fly. That kind of restraint would be cool if it served to intensify the struggle between Lazarus, Rae and their unruly desires. But Brewer’s protagonists don’t have desires so much as aberrant physical compulsions that arise from traumatic memories and lack of love. Once they sort the whole business out, their choices become clearcut. They can then quit their foolish association before it Goes Too Far.

Damn shame, because the second act of Black Snake Moan (before Jackson returns to his designated position as Bojangles to Ricci’s Shirley Temple) is white hot and hilarious. Brewer’s pedestrian exposition gives way to emotional realism and playful, rhythmic mindfucking. Brewer, cinematographer Amy Vincent, editor Billy Fox, and Brewer’s sound crew orchestrate a dazzling tug of war over Rae’s clanking, phallic chain. The chain becomes another protagonist, a totem of infinite pop, sexual, racial and historical allusions. It snaps taut like the surging erection Lazarus is too decent to have; coils like a bibilical serpent around Rae’s curves when she’s writhing in heat. In a brief scene that could unite BDSM pros, Black History professors and ambivalent Klansmen, Rae leads Lazurus through his own farmland, nearly seducing him with her jiggling ass and yanking the chain imperiously, as if she were the slavemaster here. This delirious moment deserves its own book of analysis. But don’t think “arid art film.” The good parts of Black Snake Moan achieve the oily ‘70s sexploitation groove its poster promises.

Still, Brewer’s pulpy tabloid sensationalism (as gaudy as the blue gator boots on the local barfly) is half-hearted. As with Hustle & Flow, Brewer initially makes grotesque spectacle out of a selfish and cruel supposed predator (Djay in Hustle & Flow, Rae in Black Snake Moan) only to reveal the wounded human being underneath. The change-up is never quite believable, a kind of canned, TV humanism. Even so, he draws natural performances from his actors when in warm/fuzzy mode. When his characters are pregnant with pent up emotions, he can write long, tender, unpredictable scenes that ring true, like the meeting between Djay and Skinny Black in Hustle & Flow. Likewise, despite lapsing into to a mediocre indie handholder in its third act, this stretch of the film also pulls some surprisingly rich emotional chords from Justin Timberlake as Rae’s nervous wreck of a boyfriend. Timberlake, barely convincing as the tough guy in Alpha Dog, here shows that his true strength as an actor is lovesick vulnerability. I never quite believed the suave, aggressive image Timberlake promotes as a pop star. His eyes are soft and uncertain, and his voice evokes a sheltered teen suburbanite. But in Black Snake Moan, his presence fits his boyish character—the town tramp’s G.I. boyfriend, Ronnie—perfectly. Timberlake makes Ronnie’s devotion to Rae understandable and affecting. He could put Jeremy Davies out of business.

No matter how nice a boy Timberlake is, though, Black Snake Moan ultimately fails at its mission to rile up black/white, red/blue America because it doesn’t let Rae and Lazarus have sex—and I mean sprawling, World War III sex. Rainer Werner Fassbinder let an elderly German widow and a hulking Black Arab become lovers in Ali: Fear Eats the Soul, and it brought the neuroses of an entire nation into view. Like Ali and Emmie, Lazarus and Rae are soulmates; the casting choices, virile Jackson and luscious Ricci, confirm this. Each of these two bug-eyed, compulsively defiant actors has a lyrical way with insults, curse words and a general surly cynicism. Their onscreen relationship gets several lovely symbolic consummations, including those infamous baths, and two scenes in which Lazarus serenades Rae into a saucer-eyed lather. The look that Rae gives him, with her head resting in his lap as he massages the electric guitar, signals the start of a lovemaking reverie—and complex aftermath—that could have changed film history.

Instead, Brewer succumbs to the fear of a black penis that afflicts the Ho’wood system he’s presumably out to bedevil, and sends everybody back to their segregated corners, fully clothed. Do-over.

Kiarostami at MoMA, Day 1: Riding in Trains with Abbas