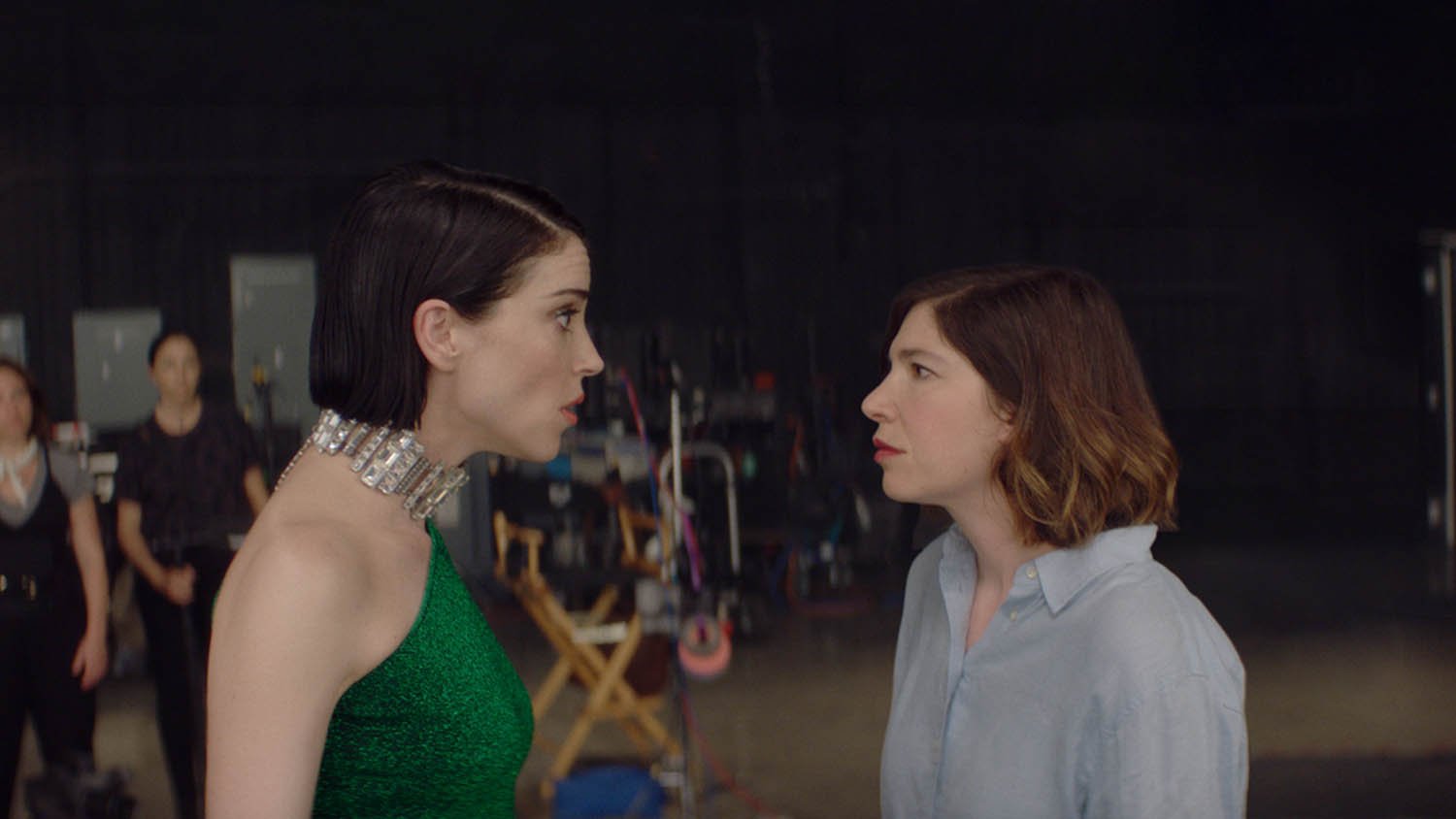 Bill Benz’s The Nowhere Inn playfully deconstructs the pitfalls and joys of stardom. Written by and starring Annie Clark and Carrie Brownstein, the mockumentary ponders whether Clark can peacefully coexist with her alter ego, St. Vincent, whether the former is even “real” and if the latter is nothing more than a calculated public image created in the pursuit of (or protection from) fame. But the filmmakers regrettably do little to shape the answers to such questions into any sort of meaningful or cohesive statement.

Benz and Brownstein, who worked together on Portlandia, transport that show’s bone-dry, absurdist sense of humor to The Nowhere Inn, playing even the film’s wildest descents into meta-weirdness with a convincingly straight face. But there’s also a piecemeal construction to the whole affair that too often betrays the filmmakers’ sketch-comedy origins (Benz also worked on Detroiters and Kroll Show). The Nowhere Inn is elevated by hilarious asides and cleverly staged sequences—such as a beautifully stylized scene where Clark sings on stage while another version of herself stands on stage in the limelight—but too often meanders, looking for different ways to hammer the notion that fame destroys authenticity.

The film begins with Brownstein shooting a behind-the-scenes documentary about Clark, with the intent of capturing the more intimate, off-stage side of her friend that audiences aren’t privy to. Soon, though, Brownstein realizes that post-show nights of Clark playing Scrabble or games on her Switch, or gushing over her love of radishes, don’t lend themselves to compelling stories. And so she pushes Clark to inject some of the energy and mystique of St. Vincent into her off-stage life—a seemingly innocent suggestion that becomes an occasion for the film to blur the lines between the real and fictional, the personal and professional.

Early on, as Clark awkwardly struggles to appear aloof and cool for the camera—setting up comically unnatural shots of herself walking and talking before she takes the stage or coyly lighting a cigarette, even though she doesn’t smoke—The Nowhere Inn mines humor and pathos from the artist’s toying with duality. There’s an especially amusing tinge of reality to a staged affair between Clark and Dakota Johnson, as it ironically references the very public relationships that the singer had with Kristen Stewart and Cara Delevingne. This stretch also plays to Clark’s acting strengths, allowing her to use her natural vulnerability and imperious stage presence to play up the split personality that has long defined her artistry.

But once Clark becomes inseparable from St. Vincent and gains complete control both over her image, the film’s satire loses its bite and sense of direction, becoming content to rehash half-baked scenes that solely highlight the constructed nature of the “new” Annie Clark’s personal life. Once the “evil” Annie comes to the fore, the film’s disjointed structure becomes all the more apparent, with straightforward scenes of concert performances feeling even more out of place amid the barrage of vaguely surreal sequences, whose commentaries on celebrity chase their tails with diminishing returns. The compelling tension that served as a driving force to the narrative while Clark was metamorphosing into her alter ego is all but drained by the final act, leaving the film, much like Clark earlier on, struggling to find its identity.

Review: Denis Villeneuve’s Dune Collapses Under the Weight of Its Self-Seriousness