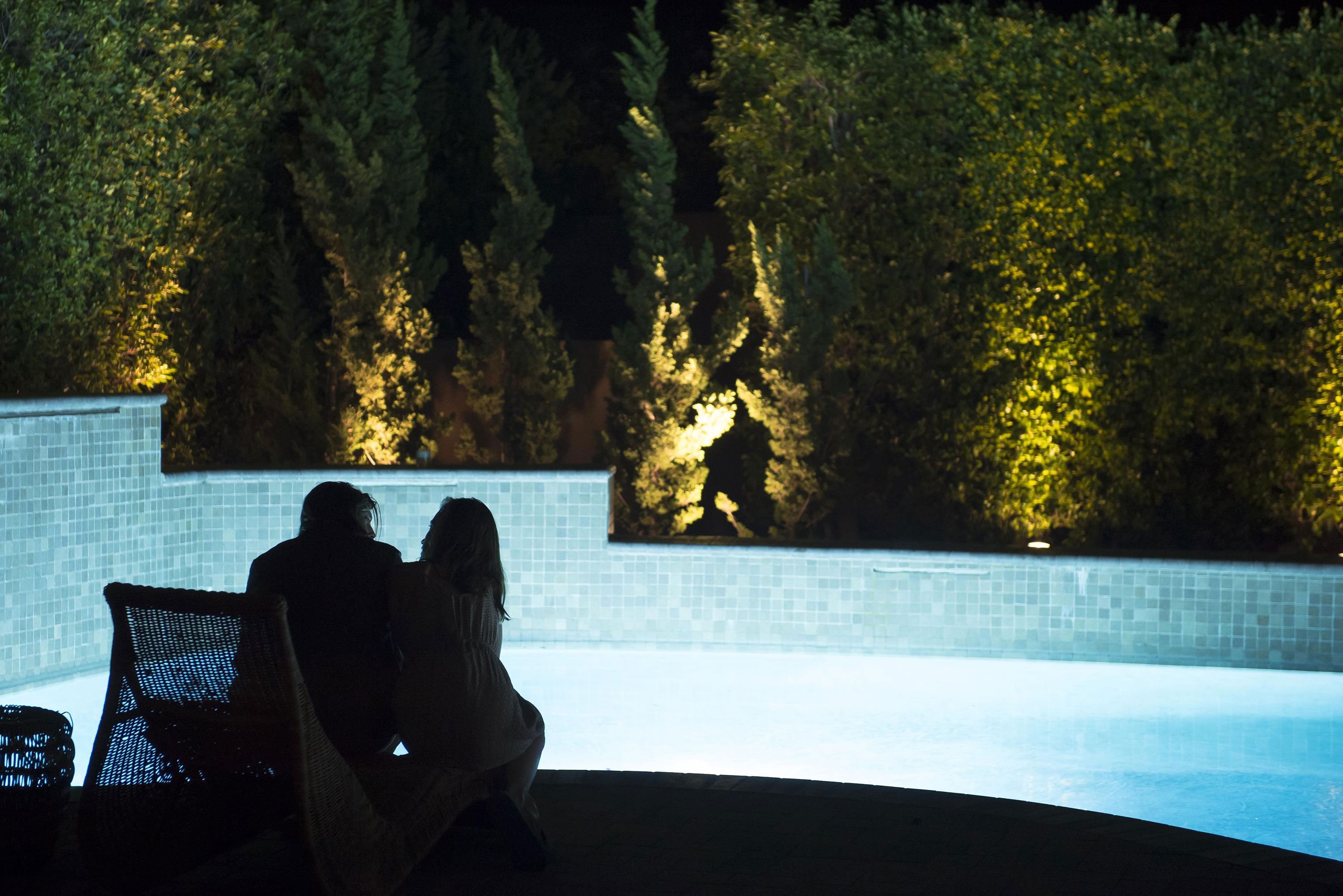 Set in the hills high above Los Angeles, The Invitation unspools at a slight remove. After all, the many mansions there survey the city as if it were an alien communication, blinking and pulsing in the distance: cellular service fades; the half-soused softness of wine and Phenobarbital dulls the day’s sharp edges; the past begins to bleed into the present. Even before the last light dims, as the reluctant Will (Logan Marshall-Green) and his girlfriend, Kira (Emayatzy Corinealdi), make their way toward a lavish dinner, Karyn Kusama’s first feature since Jennifer’s Body follows the logic of memories, of dreams.

The jolt of a coyote crossing Will and Kira’s path grows fainter and fainter, first as the camera watches Will put the creature out of its misery from the backseat of the car, and then as their arrival at the party displaces the traumatic event altogether. In this, the film telegraphs its interest in the wavelike nature of grief, flooding in and receding, as omnipresent as the sea. A charged, unnerving turn of the screw, The Invitation is consumed by the fear of forgetting—and, in the end, of not being able to.

The title, we learn, refers not only to the hosts’ hospitality, but also to a self-help program for those mourning the loss of a loved one, which Will’s ex-wife, Eden (Tammy Blanchard), and her new beau, David (Michiel Huisman), exalt as true believers. “There is no darkness,” the program’s serene leader proclaims in a recruitment video, presiding over a woman on her deathbed. “Just reunion.” To anyone familiar with the Manson Family, Heaven’s Gate, and the Jonestown massacre, the implication here is clear, yet the filmmakers cannily hold the word “cult” at arm’s length, aided by the actual excesses of a particular strain of California spiritualism.

With her wide, wet eyes and glazed expression, dressed in a billowy, floor-length white dress, Eden, for example, might be either a goddess of destruction or a run-of-the-mill New Age Angeleno, the sort of person you’d bump into at the Whole Foods on Fairfax with a basket full of beet greens and homeopathic remedies. At certain altitudes (north of Santa Monica Boulevard and the 101, say), traditional recipes for “health” and “wellness” seem to demand a few adjustments.

Indeed, The Invitation filters each sinister development through Will’s unreliable perspective, to the point that one friend’s failure to turn up, or another’s precipitous departure, appear as if submerged, changing with each shift in the emotional current. Returning to the rambling house where he and Eden once lived for the first time since the death of their son, Will finds himself inundated anew by his heartache, and the film, which otherwise hews to crisp, clean realism, is run through with these painful stabs of memory. Eden slashes her wrists in the kitchen sink, the sounds of children playing emanate from the empty yard, inane talk of the Internet’s funny cats and penguins becomes white noise against Will’s screaming: The question of whether or not to trust his sense of foreboding is perhaps not so open as Kusama and company might wish, but against the terrors of continuing on after losing a child, the issue of narrative suspense is almost immaterial.

The Invitation doesn’t sustain the evening’s tension so much as allow you to forget it, subsuming each unsettling occurrence into the stricken whole. Will and Eden’s bereavement is itself so inconceivable, to us as to their friends, that any outcome becomes possible. And by the time the climax arrives, culminating in the film’s utterly chilling final image, The Invitation externalizes the disquiet that swirls and eddies around all of us, most succinctly expressed in the medieval proverb: In the midst of life, we are in death.

Rendered in such bold terms, grief, inescapable and universal, seems strange to accept as a matter of course, and yet we do so without a second thought. It’s only through the sudden jolt, the traumatic event, that we’re reminded of its omnipresence, and of the agony, the derangement, it causes. It’s enough, in The Invitation, for the worst sufferers to mistake the kind and the cruel. “It’s a good thing,” David says when the killing of the coyote comes up in conversation, without pausing, as Will did, to consider the horror of ending an innocent life, even in extremis. “That was mercy.”