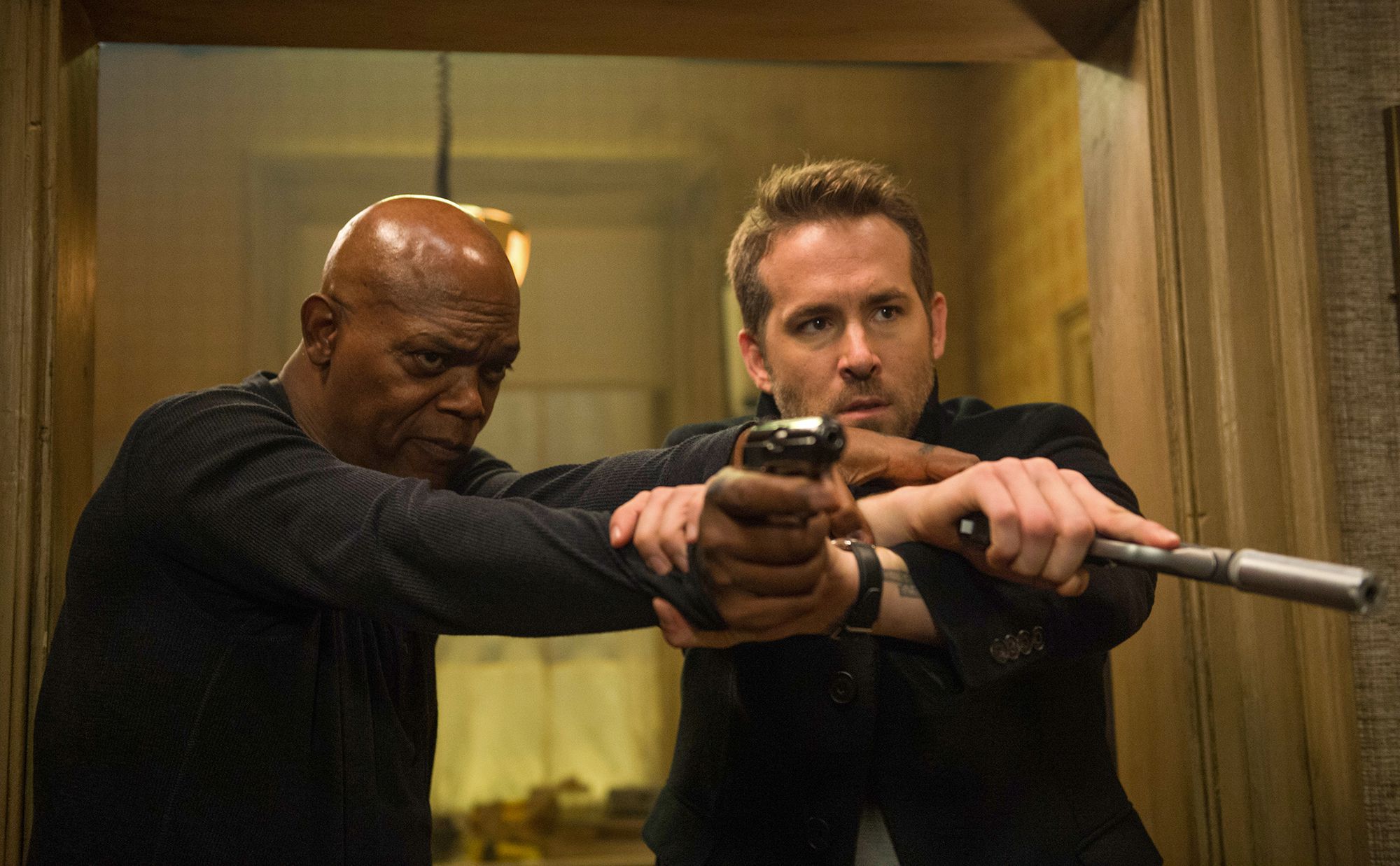 The prologue to Patrick Hughes’s The Hitman’s Bodyguard introduces Michael Bryce (Ryan Reynolds), the owner of a security firm that services the rich and powerful—until a bullet to a client’s head puts an end to his successful business and lavish lifestyle. This slick, wise-cracking badass needs to regain his lost mojo, which is where the president of Belarus, Vladislav Dukhovich (Gary Oldman), comes in. Michael’s new client, Darius Kincaid (Samuel L. Jackson), is a hitman who must be escorted from Manchester to Amsterdam in order to testify against Dukhovich, who, after murdering a dissident’s family, is being tried at the International Court of Justice. Along the way, relationships are tested, as is the audience, which is subjected to one incongruous fusion of action, comedy, and romance after another.

Among the seemingly countless bumps on Michael and Darius’s trip to Amsterdam is the former’s past relationship problems with Amelia (Elodie Yung), the C.I.A. agent who blackmailed him into accepting this latest job while also promising to help him rebuild his reputation. Also complicating matters is that Michael and Darius have a sordid past of their own from the dozens of times Darius has tried to assassinate Michael’s high-powered clients. Their genuine mutual hatred provides some snappy one-liners early on, but their obsession with one another’s love life feels oddly forced into the film’s action. Darius is particularly insistent on getting Michael to apologize to Amelia for his accusations that she sold out the location of his client who was killed but does so with the childlike forthrightness and persistence of a teenager. Rather than playing these sequences for laughs, the filmmakers rely on them purely for an emotional gravitas that’s never earned.

At least our peek into Darius’s love life benefits from the film’s smoothest integration of humor and romance into Hughes’s rote sense of action. Darius’s incarcerated wife, Sonia (Salma Hayek), is essentially the Bonnie to his Clyde, and though her comedic persona is built too much on dropping F-bombs, there’s a harmonious tonal alchemy to her scenes. The funniest is a flashback to Darius and Sonia’s first encounter at a bar, where, after being touched inappropriately by one man, Sonia takes on several other barroom roughnecks, breaking bones and slitting throats with a fury that astonishes and enraptures even the deadly Darius. Set to pop music and punctuated by increasingly cartoonish reaction shots from Darius, this flash of explosive, tongue-in-cheek violence is notable for its confident sense of modulation.

Pity, then, that Sonia, like Reynolds and Jackson’s comedic interplay, is too often sidelined in order to focus again on the details behind the plot to take out Dukhovich. Upon arriving in Amsterdam, Michael and Darius are instantly pulled into an intricate chase—a protracted sequence that makes effective use of the city’s canals and narrow streets. At one point, Michael is seen sipping his liquor at an outdoor café while Darius causes an array of crashes and explosions in the background. It’s an inspired comic punctuation mark in a sequence that’s otherwise humorless, and cut so rapidly with quick zooms and shaky-cam shots that it devolves into a formless blur.

Ultimately, the film most disappoints for its unwillingness to consistently poke fun at its inherent absurdity. Indeed, when a certain cheeky self-awareness is allowed to take hold, the characters are given room to wander outside the strict confines of the barebones A-to-B action-thriller narrative. And because it so consistently fails to meld its comic sensibilities and love stories with its generic action premise into a seamless whole, The Hitman’s Bodyguard sometimes just appears to be parodying the sort of mess it ends up being.

Review: What Happened to Monday