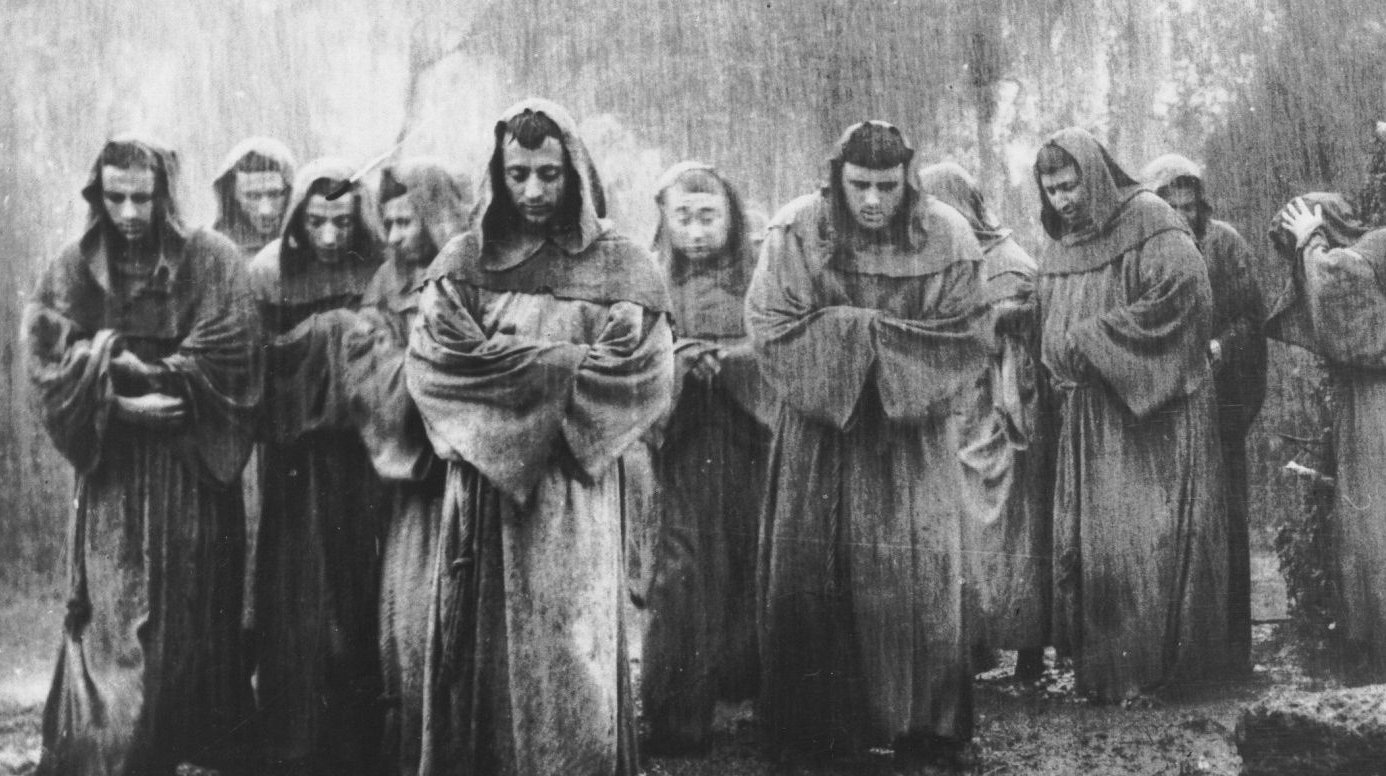 Faith is the hardest thing to depict on-screen—what more proof is needed than Mel Gibson orchestrating a soulless, hate-mongering bloodbath out of the lessons of the Bible? Long before catechism was envisioned as a Lethal Weaponesque distillation, the true masters (Dreyer, Bresson, Buñuel, Tarkovsky, Bergman) had already been grappling with spiritual unrest and the need to believe, though not without enriching their portraits of sainthood with layers of ambiguity. Yet leave it to Roberto Rossellini, the Italian Neo-Realist pioneer with his country’s postwar wounds still bleeding, to come up with cinema’s purest, least cynical vision of faith as a way of viewing and receiving the world around us. Indeed, the director was always fascinated with the hardships of spirituality, which in Stromboli and Europa ’51 propelled muse Ingrid Bergman into snapshots of anguished modern-day saints, emerging at its most explicit in The Flowers of St. Francis, the air-filled masterpiece he all but tossed off in between his twirls with La Bergman.

Francis of Assisi, of course, the most literal of the gospel’s followers, who ditched material comfort for a simple life closer to God and nature—“crazy,” as Bergman is to discover the next year when she tries the same uncomplicated goodness in contemporary Rome. But these are medieval times, and Francis (played by Brother Nazario Gerardi) arrives with his disciples (all portrayed by real-life members of the Nocere Inferiore Monastery) in the midst of a torrential downpour, scrambling to find shelter in the tiny hut they’ve built in the woods. A farmer has camped in with his donkey, and drives the monks out into the mud; Francis’s response settles the tone: “Have we not now reason to rejoice? Providence has made us useful to others.” Off they go to rebuild a dilapidated chapel and reenact Middle Ages fioretti lessons, the “flowers” of the title, in skit-like episodes of Zen enlightenment: how they tidy up the place to receive Sister Chiara, how Fra Ginepro cuts off a pig’s hoof for an ailing brother, how actions win souls more than words, et al. Throughout, Francis nods benevolently, swallow perched on shoulder.

Handled by virtually any other director, the same scenes would soak in the ponderous faux-piety of the standard religious epic, all agony and no ecstasy. Just as in his sublime, late-career historical recreations, Rossellini refuses to entomb his characters in the plaster of posterity, and through the saint-to-be we feel body and soul, earth, animals, and elements, all in the same visceral, present-tense timbre of Open City. A flame nearly devours Francis’s cassock, yet there’s a sense of cosmic harmony and wholeness with the universe; centuries removed from Rossellini’s (and Italy’s) present, the movie is his most utopian contemplation of reality. Paradoxically, it is no less a cri de coeur than Germany Year Zero, his devastating 1948 tract of moral squalor amid the ruins of Berlin—far from pointing back to regression, Rossellini understands how people can court revolution by altering their view of the universe. When Francis hears the stay-away chimes of the leper and kisses the ravaged man’s face instead of fleeing him, the transcendent sequence channels an awe-inspiring blend of compassion, disgust, fear, and love, all melding into truly practicing what you preach.

The theme is less the simplicity of religion than the religiosity of simplicity, and The Flowers for St. Francis, shot from a 28-page treatment by three people (including Federico Fellini), is limber and exuberant, boasting a sprinting tempo. Francis may be “God’s Jester” (the film’s original title), but he remains straight-man to his batch of followers, and it is startling and enlivening how often Rossellini’s treatment of Franciscan humility comes close to forehead-slapping, slapstick farce. Forever returning home in his briefs after compulsively giving away his clothes to the poor, Ginepro is the film’s soulful bumbler, stuck babysitting dotty, hug-happy Giovanni until finally allowed to go preaching, only to end up in a camp of beastly barbarians who spend their free time slugging each other’s noses just to see the blood flow out. The friar comes within a hair of being gutted, yet when Ginepro’s beatific passivity dismantles the spiky armor of the tyrant Nicolaio (mugged up tremendously by Aldo Fabrizi), the movie displays a profound understanding of the political connotations of faith. Ready to embark on their individual journeys, the brothers spin in circles to dizzily fall down toward their destinations, and the scene’s solemnity is promptly deflated by Giovanni’s improvised remark that he’s fallen toward some bird flying nearby. Francis and the others laugh, and so, one imagines, does Rossellini behind the camera—the sublime cannot exist without the ridiculous, humans cannot separate grace from the physical world, and an ad-libbed joke can become the “Amen” to the director’s celebratory stanzas.

Review: A State of Mind