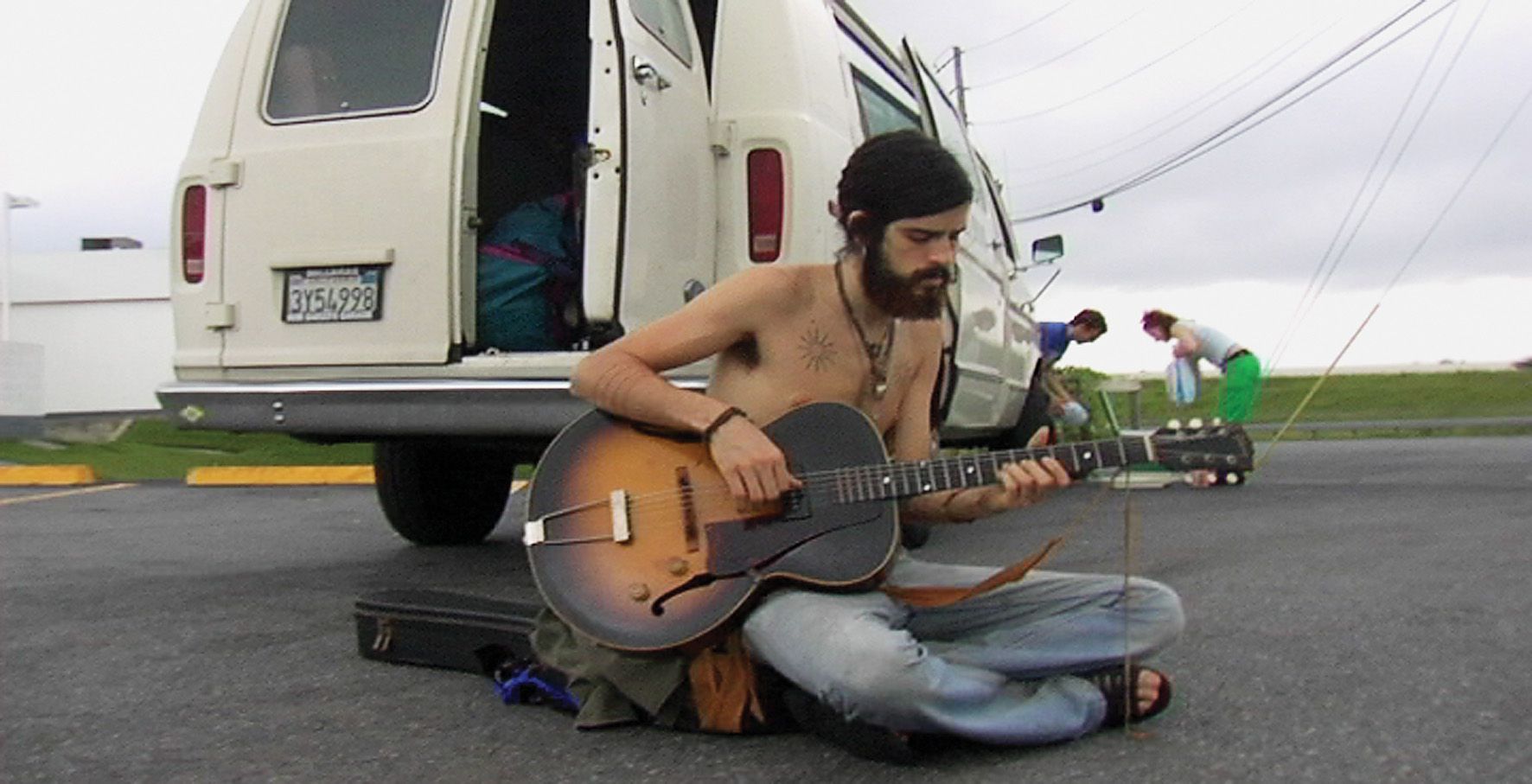 Kevin Barker’s The Family Jams follows a number of folk acts—among them Devendra Banhart, Joanna Newsom, and Vetiver—as they toured the U.S. in 2004, playing a number of bars, coffee shops, and art galleries in addition to spontaneous sets in parking lots or backyards. This doc, according to the accompanying notes, captures a “fleeting moment when they transcend the world they’ve built for themselves and the rest of world takes notice.” If that sentiment strikes you as reasonable and moving, as opposed to maybe an intelligent sixth grader’s idea of prose, then The Family Jams may indeed work for you.

The film certainly brought back memories of politely applauding college bands that played shows, in little spots in and around my campus, that usually invited appraisals such as “pretentious,” “well-meaning,” “clichéd,” and “god-awful.” There’s indeed a real film that could be made about the typically retro-contemporary DIY band clearly intent on capturing the mythology that the last few generations have been fed about the glorious sexual, truth-telling rebellion of the 1960s. A poignant film, indeed, could be made about much of my generation’s apparent inability to express its own concerns its own way, particularly in an especially head-up-its-ass period in American history as hopelessly in need of art-contextualization as this current one.

But Barker is sort of a member of one of the bands he’s filmed (he occasionally appears as a guest player for Banhart), and his film has no artistic distance, no narrative shape, no real craftsmanship of any kind. The Family Jams is an edited home video, not a movie, and it’s an especially annoying home video with delusions of artistic grandeur. The film alternates between clips of the musicians confessing banalities that could’ve been lifted from 30-year-old issues of Rolling Stone and their equally derivative performances, which generally seem to play as fashionably incoherent imitations of Joni Mitchell, Bob Dylan, etc.

The film is so oblivious to its subjects’ unoriginality—and, frankly, as presented here at least, lack of talent—that you occasionally wonder if The Family Jams is some sort of joke. Devendra Banhart is the most memorable stereotype. Adapting the de rigueur Jesus Christ/Charles Manson look, he regales us with innocuous prison anecdotes while occasionally dropping in forced 1960s verbal anachronisms while his band members prattle on about society’s obsession with categorization, which is ironic considering that few seem more concerned with categories than painfully hip fringe art stars.

Barker doesn’t even adequately establish the progression of the road trip, much less any other continuity. People come and go seemingly willy-nilly; the only real consistency is the hushed, unduly worshipful tone, which leads to moments that are stretched to eternity. In the middle of the film, a few of the musicians sing a Fleetwood Mac song in someone’s kitchen, with the camera placed on the floor, the subjects grouped together in a way that nearly resembles the blocking of a conventional film. This scene isn’t especially memorable, but it still stands out from the rest of this amateurish mess. For a moment, you’re hearing a song that actually sounds written, while looking at an image that actually almost seems to have been set up with attention to aesthetics. This brief interlude is, sadly, the oasis in the desert, but it’s ultimately a mirage.

Review: Kati with an I