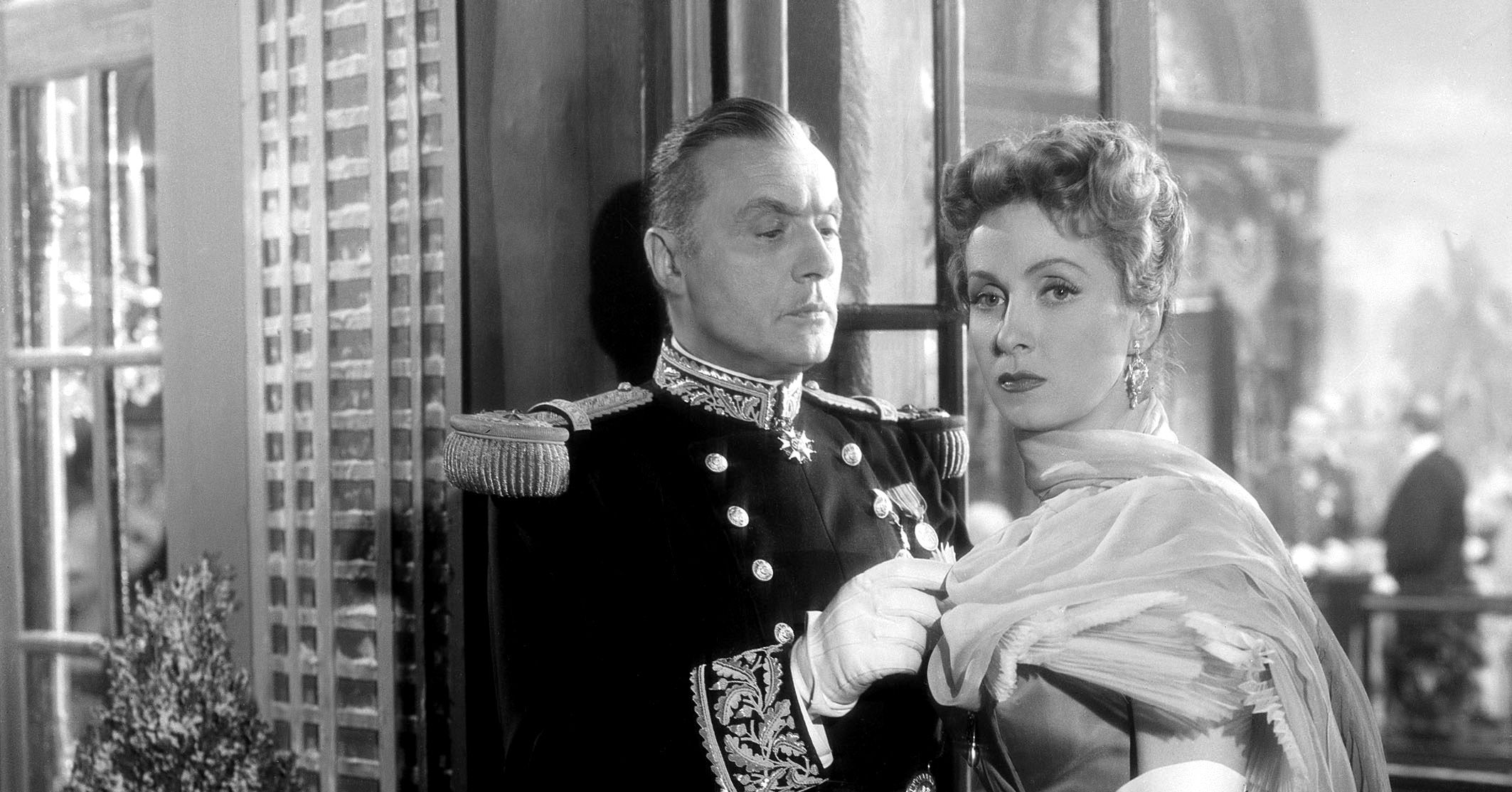 The titular jewels of The Earrings of Madame de… provide not just the axis around which the film’s elegantly darkening roundelay turns, but also a telling stand-in for the essence of Max Ophüls’s art—an object of glittering surfaces which, through an astounding accumulation of passion, comes to embody devastating depths of feeling. At the start of the picture, the earrings are merely another piece of luxury in the cabinet of the frivolous Countess Louise de… (Danielle Darrieux); her extravagant spending has placed her in debt, so she secretly sells them and tells her husband, General Andre de… (Charles Boyer), that she lost them at the opera. In a world as full of movement as Ophüls’s, however, people and objects swirl as if locked into orbit, and the earrings soon find a way back to the household, resold to Andre by the jeweler. Long accustomed to his wife’s caprices, he plays along with her charade and gives the earrings to his mistress as a farewell present, which are promptly lost at a casino in Constantinople. By the time they have made it back to Paris with Baron Fabrizio Donati (Vittorio De Sica) and given to Louise as a token of their clandestine romance, the ornaments have subtly shifted from a capitalistic memento to a heartfelt symbol of emotion and, as the characters are made to face the consequences of their affairs, of tragedy.

Evanescence is an integral part of cinema, and no other director captured it as lyrically and yet as savagely as Ophüls. His tracking, dollying, gliding camera was never more mellifluous, or his visualization of life’s inexorable flow more tangible, than in The Earrings of Madame de…: The dissolving ballroom twirls between the Countess and the Baron form possibly the most graceful invocation of the passage of time ever depicted on screen, while a transition from the fluttering pieces of a love letter to snow falling outside brilliantly conveys the slender line separating the incandescent from the sepulchral in a world marked by transience. If Lola Montès gave a martyrized summarization of Ophüls’s career, Madame de… offered the director the most seamless expression of his worldview, culling and expanding images and themes from his entire oeuvre—most directly La Ronde’s circular structure, but also Liebelei’s departing trains and Le Plaisir’s closing windows.

More closely, however, the film relates to Ophüls’s Hollywood masterpiece, Letter from an Unknown Woman. While Joan Fontaine’s young dreamer in the earlier film experiences reality as it shatters her romantic illusions, Darrieux’s more cynical coquette no less painfully rediscovers the ardor of a romance that seems to dismantle the tidiness of society. Both films are tragedies of the rapture and wreckage of emotion closer to the sensibilities of Tolstoy and Flaubert than any of the official film adaptations of their works. Completing its enchanted sense of geometry, Madame de… in the end returns to the earrings, now in church rather than in the boudoir, with romance both mourned and exalted by the rhapsodic camera.

Review: Audience of One