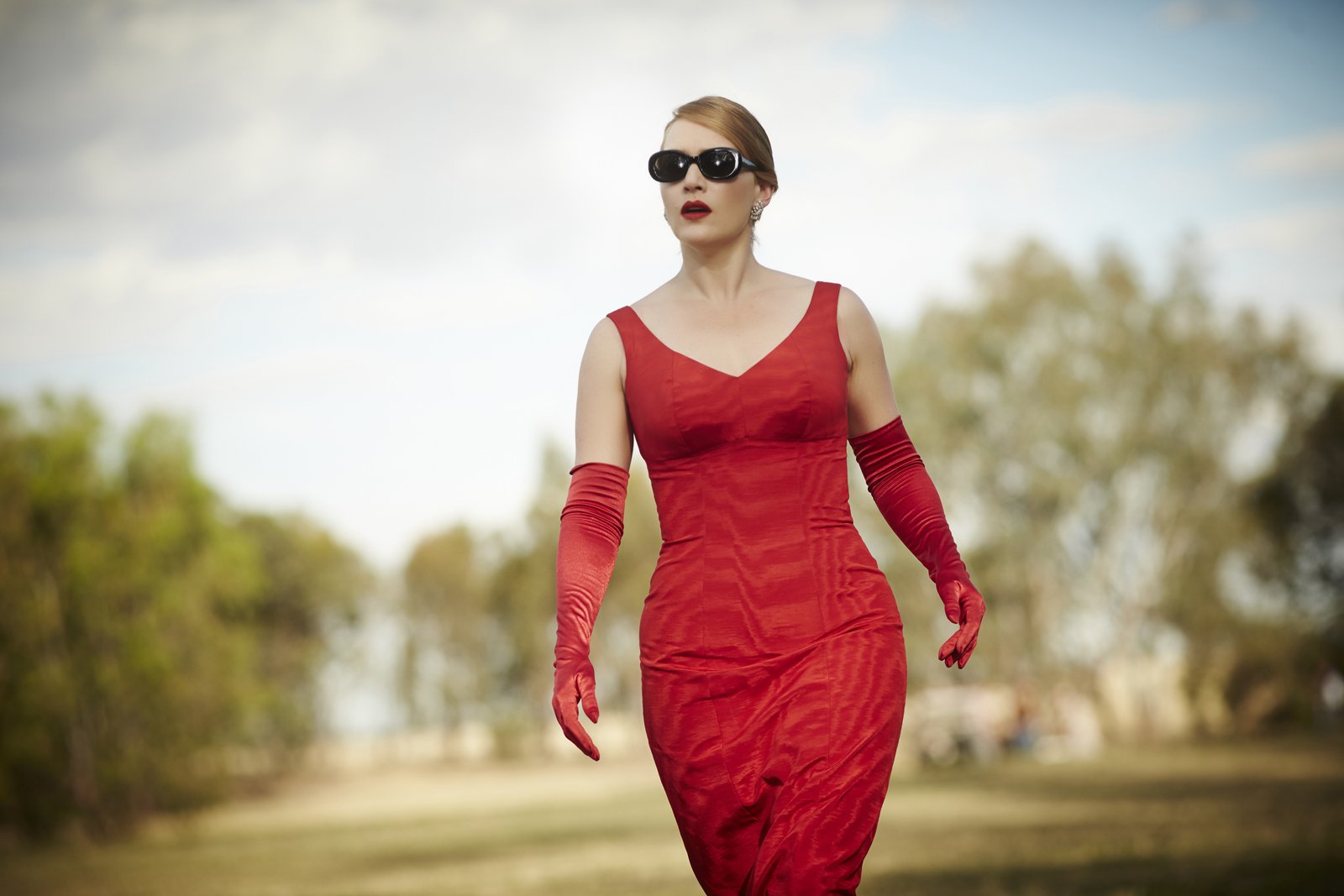 In Jocelyn Moorhouse’s The Dressmaker, the first words we hear from childhood bully magnet turned fashion plate Tilly (Kate Winslet) come after she steps off a bus into her one-horse hometown, lights a cigarette, and coolly surveys the façades on a street that brings to mind the set for a 1950s western. “I’m back, you bastards,” she hisses. After that brashly meta opener, you might expect a smartly constructed Tarantino-style black comedy of retribution, but the film fails to deliver on that promise, devolving instead into a dispiriting tonal mishmash of mean-spirited revenge fantasy, girl-power romantic fantasy, and comedy so broad it tips into caricature.

The revenge fantasy is baked into the main narrative, in which Tilly uses her near-supernatural skills as a dressmaker to transform the disheveled women of Dungatar, Australia into sleek, chic creatures, getting close enough to her former neighbors to unearth their sad or sordid secrets and solve the mystery of a death they’ve been wrongfully pinning on her for decades. Meanwhile, her hunky love interest, Teddy (Liam Hemsworth), might have walked straight out of a romance novel, with his washboard abs, hipster beard, and steadfast adoration of Tilly. And the film’s reductive, often cruel depiction of nearly all the other townspeople feels like a clumsily drawn cartoon.

Tilly’s tart mother, Molly (Judy Davis), a sly fox who sees and feels a lot more than she likes to let on, is complex enough to be intriguing, and Winston gives Tilly an appealing down-to-earth warmth and capability that, paired with bouts of crippling self-doubt, makes the character relatable. But everyone else in the film is either gently patronized, like Gertrude (Sarah Snook), the girl too humble to land the boy of her dreams until Tilly gives her a head-to-toe makeover, or demonized, like the gossipy women and mean schoolteacher—with the on-the-nose name of Miss Harridiene (Kerry Fox)—who afflict this ostensibly feminist fable with a queasy-making tinge of misogyny.

The humor, too, is often uncomfortably broad, as when Sergeant Farrat (Hugo Weaving), a cross-dressing cop, nearly orgasms over a box of fabric delivered to Tilly from Paris, pawing and ooh-ing and ahh-ing at the fancy materials. Farrat’s outsider status may be intended to cement our sympathy for the socially ostracized Tilly and her equally shunned mother, as they bond with fellow misfits like the sergeant and Teddy’s developmentally disabled brother, Barney (Gyton Grantley). But the frequent contemptuousness the film displays toward its characters keeps the audience at arm’s length, making all the angst and intrigue on display in Dungatar read as strenuous playacting.