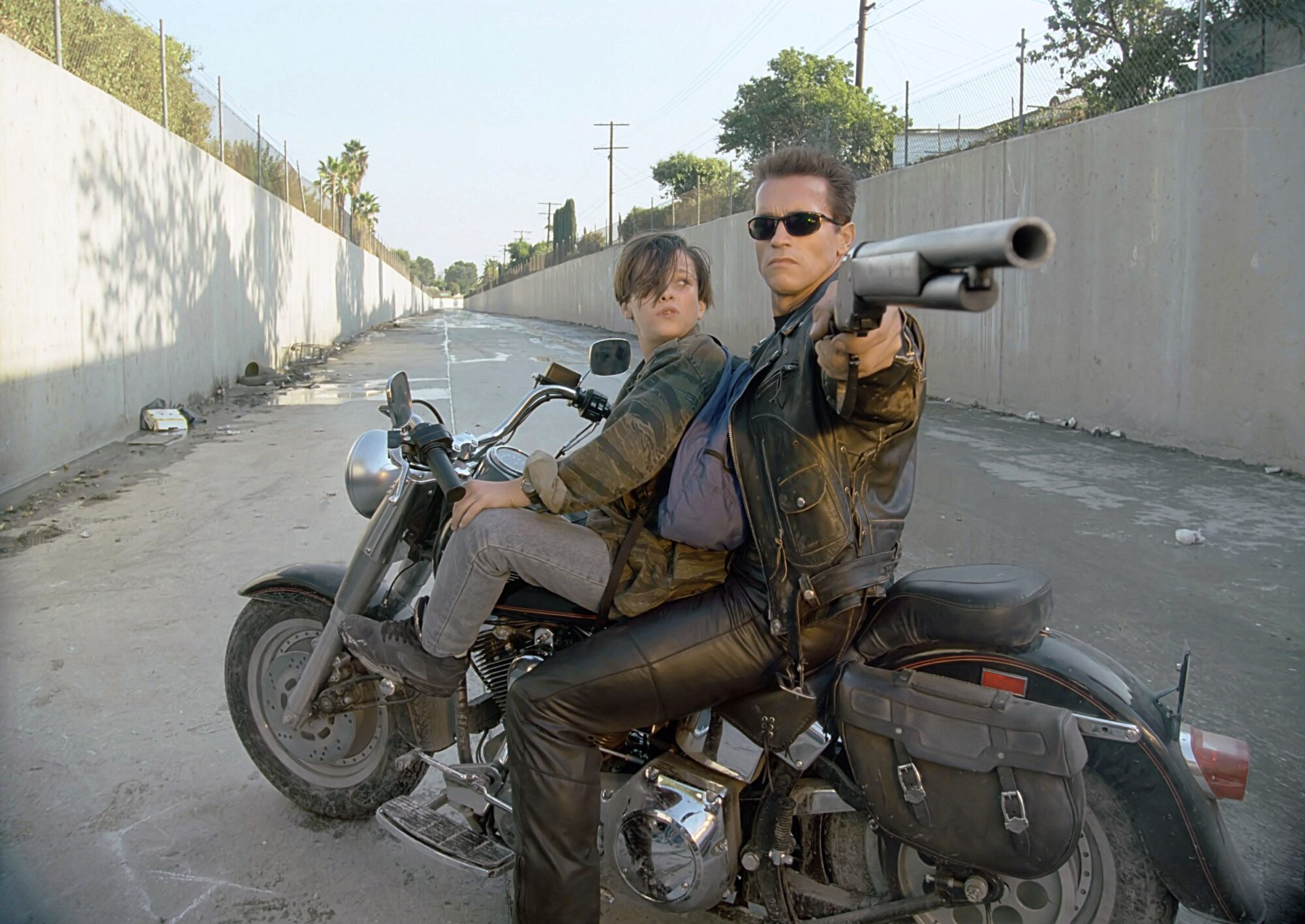 Twenty-six years after its release on Independence Day weekend in 1991, it’s difficult not to watch Terminator 2: Judgment Day through a scrim of irony. The film concerns the efforts to prevent the near-apocalypse that was foretold by its predecessor, in which sentient machines turn on humans and realize threats that were inherent in the Cold War. The machines were built by humans as an elaborate defense system, suggesting Ronald Reagan’s “Star Wars,” and are visualized by James Cameron as abstractly geometric flying war vehicles that lay waste to humans from the sky as well as terrifying robot exoskeletons with beady red eyes that blast soldiers to bits on the front lines.

In 1984’s The Terminator, the machines tried to win the war by preventing it, sending an endoskeleton disguised as Arnold Schwarzenegger back in time to kill Sarah Connor (Linda Hamilton), the mother of the future leader of the human resistance. In T2, as the film was marketed, the machines attempt to directly kill savior John Connor (Edward Furlong), sending a new murderous emissary back to the early 1990s while Connor is a 10-year-old boy. Which is to say that the heroes of T2 are dreading a hellish future that may potentially be inevitable. And as we watch them scramble to destroy relics left over from the first Terminator, their efforts are cloaked in the retrospective understanding that T2 brought forth its own kind of culture-quake.

The passage of time has only made us more complicit with Sarah, who warns of a catastrophe that, in its broad strokes, is more possible than ever, and which has already been partially realized—with the help of T2. Aesthetically, T2 features still-fairly-impressive CGI effects that have proven revolutionary, opening the floodgates for animation that divorces action filmmaking of its visceral corporeality, allowing technicians to show us superheroes and Transformers who hurt each other harmlessly and pointlessly ad infinitum, nurturing, along with increasingly sophisticated video games, a culture of seductive militarization. Socio-politically, T2 is so retro it’s prescient, inadvertently anticipating renewed tensions with global superpowers as well as a proliferation of self-controlled technology that divorces people of responsibility, complicity, and power. The warplanes of T2 are drones that ceased, one day, to feign a pretense of fealty to the human race.

Another irony to the CGI revolution that Cameron helped to initiate is that corporeality is actually the strength of his own aesthetic. While there are few beautiful images in The Terminator, Aliens, and T2, they’re still astonishing works of kinetic force. Cameron’s a master of the collision of bodies against their settings, and of showing bodies in a duress that’s simultaneously painful and exhilarating. In Aliens, images of the insect-like monsters awkwardly jostling along metallic corridors in pursuit of humans are unforgettable for the sense of weight that the figures themselves possess (which is affirmed by brilliant sound editing). In the same film, Cameron lingers lovingly on the muscled skin of his macho marines as it glistens with sweat and exertion.

In T2, the exoskeleton, when we first see it, stomps a foot with nightmarish solidity into a human skull, crushing it. And recurring auto-critique is fashioned from the dust-ups between Schwarzenegger’s T-800, an antiquated machine programmed to serve the Connors, and the T-1000, an evil new “liquid metal” robot played predominantly by Robert Patrick and a gallery of clever and occasionally quite scary CGI effects. In essence, we’re watching a war between practical and computer trickery, and the winner in the film wasn’t the winner in real life. Cameron makes blunt, startling comedy out of the sight of Schwarzenegger, an international icon on the level of John Wayne, getting his ass kicked by a man who appears to be roughly a third his size.

There’s also a sexual element to these skirmishes, as if these nearly indestructible colossi keep pairing off to fuck without hope of ejaculation. Per Cameron’s wont, the collision of the men is vividly rendered: by the pain in Schwarzenegger’s face; the cacophonous sounds of walls and other surfaces exploding upon impact; and the uncanny sight of Schwarzenegger’s head as it’s partially unpeeled to reveal the monster of future shock technology underneath, which is the unlikely key to reclaiming human life.

Like its predecessor, T2 is a blend of action and horror, and, as in most films belonging to either of those genres, it has a reactionary streak about which it’s fascinatingly unresolved. Cameron’s self-conscious enough to know that he can’t have his “good” Terminator killing people willy-nilly, especially as played by a man who became a superstar by softening the hard and narcissistic image that he honed in Pumping Iron. And so John must teach the T-800 to be more sympathetic, which entails shooting innocent people in the kneecaps, causing them great pain and potentially handicapping them but providing us with the sensory exaltation that’s expected of action cinema, only without the guilt that might go with laughing along with outright murder. In this sense, T2 divorces audiences of responsibility in a fashion that suggests the pop-cultural equivalent of, well, drones. Carnage is diluted so as to pair ideally with our supersize Coke and popcorn.

Cameron invented a new form of action-movie hypocrisy, showing how ultraviolence could be marketed to kids (despite its R-rating, T2 was pitched shamelessly to children), yet he doesn’t entirely subscribe to it. Underneath Cameron’s bluster lurks an artist, which is notable in a moment in which John first discovers that the T-800 has been programmed to obey him unquestioningly (which makes no sense, though little of the film’s plot does). John, an impetuous and troubled boy, gets the T-800 into a fight with a pair of vapid yet empathetic bodybuilders, reveling in his power over the men, until the T-800 pulls a gun to unceremoniously kill them. In this moment, the primordial senselessness and violation of murder is explicit in a way that’s profoundly rare for mainstream action filmmaking, and this sensitivity is later affirmed by the hauntingly prolonged death of Miles Dyson (Joe Morton), a key and morally conflicted innovator of the machines that will ruin all.

Yet T2’s visionary qualities are tethered to a chase narrative that’s stretched out to an interminable length. The Terminator is masterful for its propulsive relentlessness, its noir-ish underworld, Schwarzenegger’s chillingly playful use of physicality, and, above all, for its seductive metallic sheen and nihilism. It’s the closest that action filmmaking has come to emulating the percussive and sentimental hopelessness of heavy metal. Of those qualities, T2 emphasizes, and explodes, only the relentlessness and the metallic impersonality.

Striving for an epic, Cameron overdoes the repetitive scenes of familial bonding and vehicle- and building-shattering chaos, and his pointed disinterest in the existential quandaries raised by the machines, particularly by the T-1000’s fluid identity, grows increasingly distracting throughout the film. Why doesn’t the T-1000 better use its gift for shape-shifting, which is clearly inspired by the creature of John Carpenter’s The Thing? Because Cameron is obsessed with pummeling momentum above individual specificity. If his work has a philosophy, it’s one of ceaseless, pragmatic exertion.

But that philosophy is marred in T2, as it is in much of Cameron’s subsequent work, by sloppy, conviction-less sentimentality. The violence of T2 doesn’t go with the cuddly daddy-bear routine that Schwarzenegger imports over from Kindergarten Cop, and, while that unlikely blend of tones provides friction, it also dulls and flattens the film. Cameron’s endless recycling here of The Terminator and Aliens, particularly in the climax set in the steel mill, also underscores that his true passion resides in the very effects and violence that he’s forced himself to consciously decry in this narrative. Cameron’s at war with the crass megaplex culture that he helped to pioneer. He’s Miles Dyson.