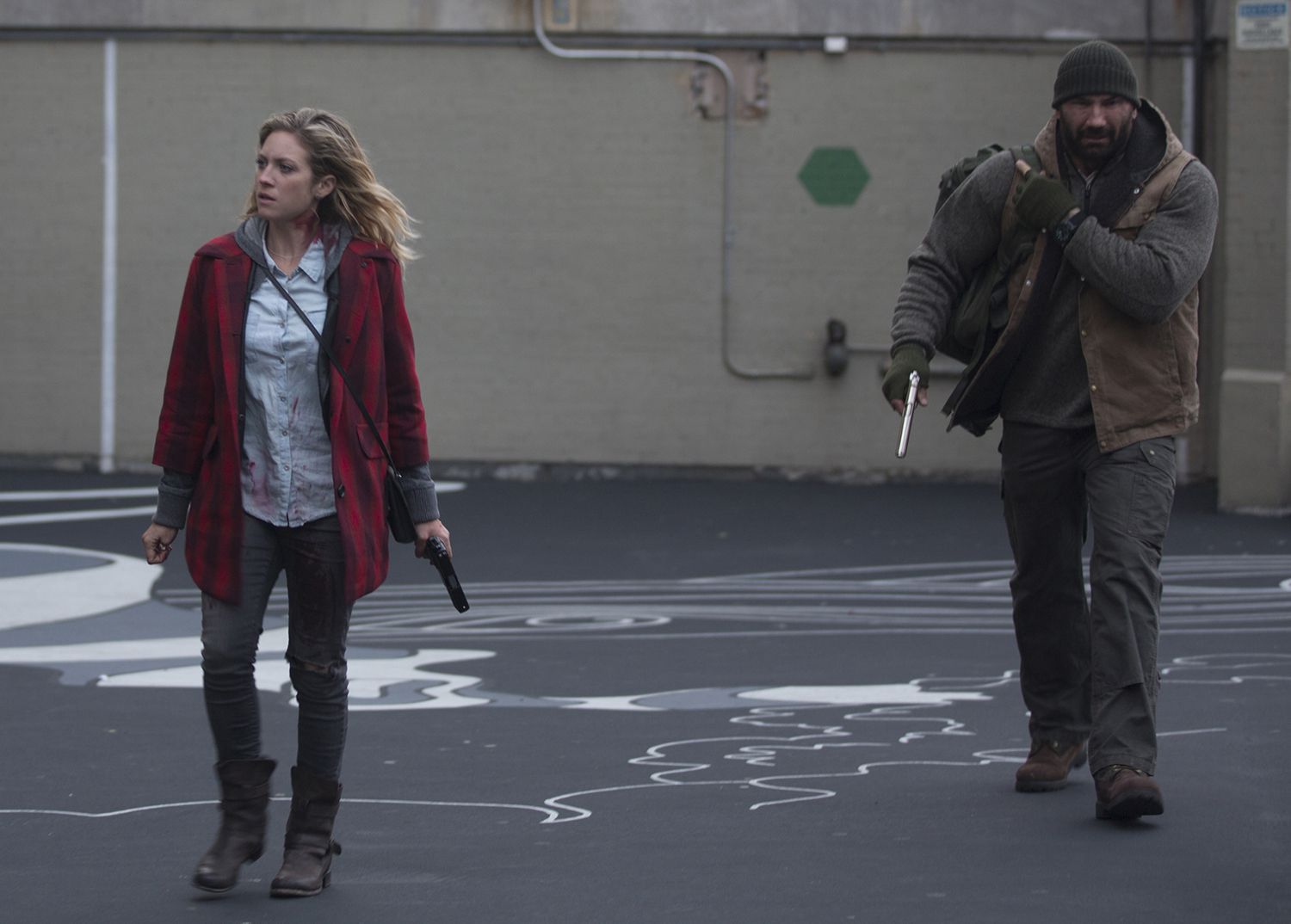 For a high-concept thriller, Bushwick exhibits an unusually earnest interest in the socioeconomic textures of how contemporary people live. Set entirely in the Brooklyn borough over a few hours, the film contrasts older residences, occupied by elderly and financially stable people, with the dangerous zones inhabited by gangs and with the little ramshackle pockets of space that are loosely defined as single-occupant apartments for struggling working-class citizens. These differences in habitat speak loudly to the erosion of opportunity that’s occurring throughout the last few generations.

We first meet Stupe (Dave Bautista) in the center of violent extremis in his home, which is a basement that suggests a cluttered and dingy combination of a broom closet and boiler room—the sort of place that one doesn’t often see in mainstream films set in New York City, which pretend that everyone can afford a loft in Manhattan. A hulking man, Stupe can barely fit in his own place, filling out his setting with a haunting sense of constriction. As Stupe and a compatriot in survival, Lucy (Brittany Snow), attempt to fight their way out of Bushwick during what’s assumed to be a foreign-terrorist invasion, they enter different residences and classic social institutions, such as a church, which exist as a base of communal reorientation in the face of chaos. Directors Cary Murnion and Jonathan Milott vividly film each habitat, evoking the comfort and claustrophobia that stem from so many little individual worlds existing in close proximity with one another within a larger multiverse.

Bushwick was co-written by Nick Damici, and has many of the concerns that run through Damici’s early collaborations with director Jim Mickle, among them a George Romero-esque preoccupation with how violence alters political posturing. The terrorists of this film are eventually revealed to be Americans—specifically Texas militia who instigate civil war, attempting to force Congress to grant the state independence via a means of highly coordinated national assaults. The other states in league with Texas are amusingly unsurprising, including West Virginia, North Carolina, Florida, Georgia, and Louisiana.

The filmmakers subtly critique the empathetic puniness of the political right, which feels imperiled despite having control of the country from top to bottom. The militia invades Bushwick because of its diversity, sensing weakness and unable to envision its citizens banding together as a community. This assumption leads to tactical disaster, temporarily mending the racial hatred that’s fostered by the culture wars as various neighborhoods, races, and classes unite to halt the militia’s invasion. (Resonantly, the militia also picks Bushwick because New York’s gun laws are among the country’s most restrictive, though that doesn’t stop gangs from achieving armament.)

Yet, this unity isn’t idealized, as many scenes pivot on the tensions that stem from cultures being unexpectedly forced to work together. In the film’s best moment, Stupe and Lucy negotiate with Ma (Myra Lucretia Taylor), an elderly African-American mother in an imperiled apartment complex with sons who aspire to gang-banging. Though Ma disapproves of her sons’ actions, they come in handy during war time, and she finds herself needing someone who might not get killed on the streets (in other words, someone white) to run her son’s weapons to the local church and effectively arm a counter-insurgency. Such a scene explodes the politics of both the left and the right, parodying the left’s pacifist naïveté and the right’s feigned ignorance of racism.

Aping the long tracking shots of Children of Men, Murnion and Milott stage Bushwick in such a manner as to suggest that it’s unfolding over the course of a single take, with a number of easily detected fade-outs between setups. This gimmickry is often distracting, but it also physicalizes the fluidity of the borders existing between Bushwick’s cultures, complementing the film’s awareness of how landscape and habitat reflects and informs society. The single-shot conceit is most effective when the camera cranes up from a basement that’s been utilized as a gangsters’ torture chamber to reveal the “civilized” apartment complex that exists above it, whose said civility is almost certainly enabled, in part, by said violence. Bushwick is a genre film with a refreshing sense of political infrastructure, illustrating how closely urban thrillers are related to westerns, as both wrestle with the incomprehensibly complex relationship existing between diplomacy and authoritarianism.