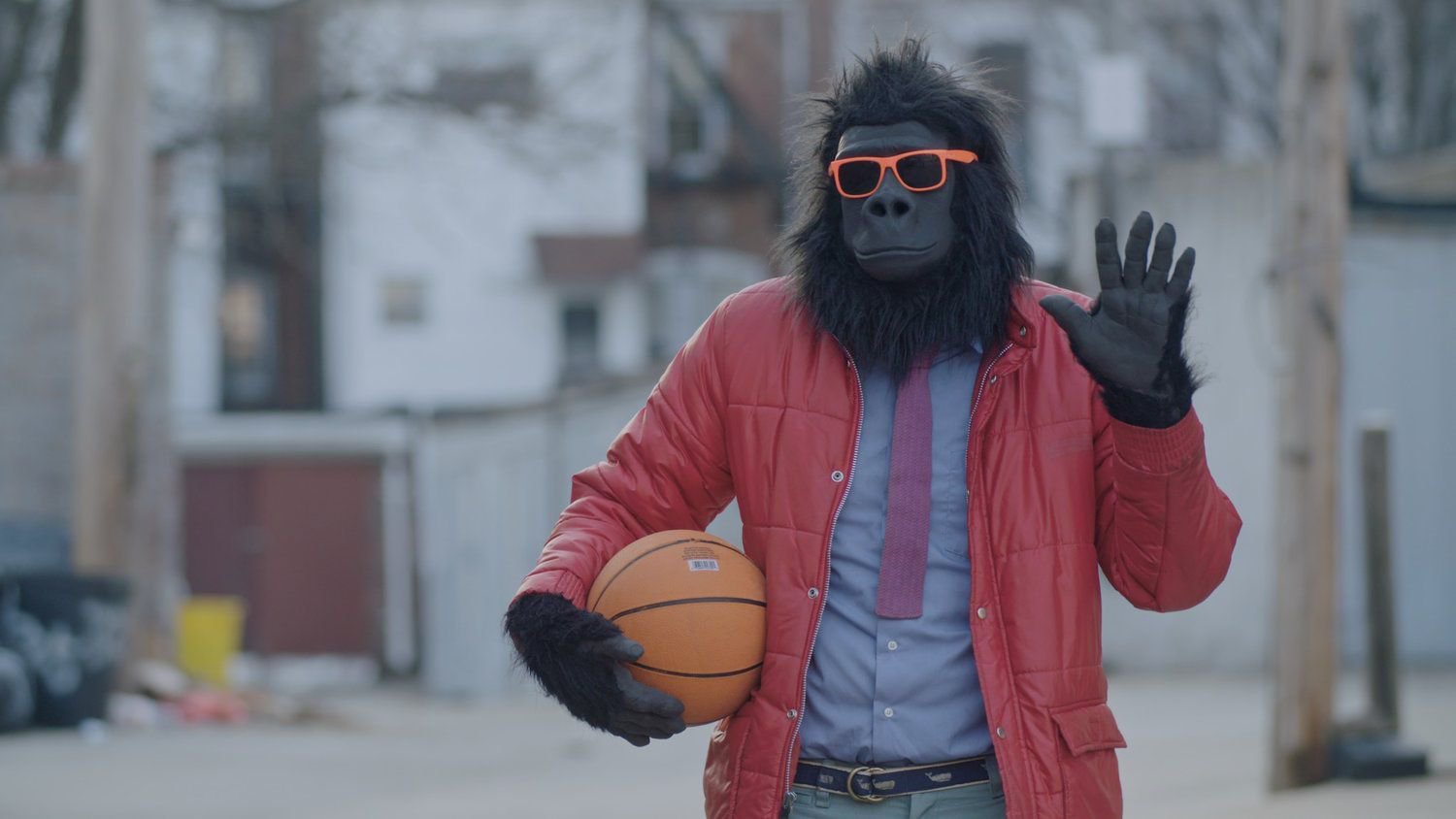 Adapted from Simply Sylvio, Albert Birney’s series of Vine videos about a gorilla going through the motions of modern life, the Kickstarter-funded Sylvio is affable and buoyant. The 800-plus Vines that Birney produced accrued over 500,000 followers, and in six-second snippets, the gags depicting a sad-sack gorilla trying to lead a simple human existence are funny and touching. But stretched out to 80 minutes, which is the cumulative length of 800 Vines, and burdened with the various necessities of narrative storytelling, what’s initially charming, in a melancholy way, grows gradually irritating.

Sylvio may be a gorilla, but his sad, solitary life has a platitudinous kind of pain that will be identifiable by most middle-class Americans. He’s a desk jockey, working for a debt collection agency, and his inability to speak human doesn’t serve him well here. He eats TV dinners alone on Christmas while drinking Genesee and he creates a homespun series of puppet videos about a balding, white-everyman schlub, Herbert Herpels, who does things like toast bread and watch TV. These scenes would be boring, their extrapolations of loneliness and depression so bland and obvious and forgettable, if it weren’t for the gorilla wearing a parka in the center of the frame.

Sylvio’s depression by numbers—the scenes of him sitting on his couch, standing morose in the shower as the water cascades down, or walking down the street—is all shot in a manner that feels indistinct. His loneliness, his eventual feel-good moments, and the film’s encapsulation of both, could be culled from saddest of Sundance productions, which may or may not be the filmmakers’ point. This is a one-joke movie, but it treats its one joke with sincerity. As the ape with an existential crisis, whose face is forever stuck in an emotionless mien and who’s cursed with an inability to enunciate his feelings, Birney brings the grace and dignity of a silent-film star. His earnestness and commitment lend the performance a fragility and tenderness that one may not expect from an adaptation of a Vine series.

Co-director Kentucker Audley, known for his Movies Brand apparel (those hats and shirts that declare, succinctly, “Movies”), plays the host of a floundering daytime talk show. Sylvio arrives to collect a debt, and ends up erroneously appearing on the program. Together, Audley and Sylvio form an unlikely—except in a feel-good film, in which this is very likely—partnership, and friendship, creating a segment in which Sylvio breaks stuff, and the monkey becomes a minor celebrity. Sylvio aspires to be taken seriously as an artist, but the public just wants the dumb anthropoid to cause harmless havoc, smashing vases, chandeliers, and panes of glass. Audley brings his usual awkward, mumbly placidity to the role, though his presence, and the film in general, constantly feels on the verge of erupting into self-parody, akin to Audley’s series of riotous satirical film analysis for Talkhouse.

Sylvio’s banal depictions of everyday loneliness through the diurnal tedium of an anthropomorphic animal brings to mind BoJack Horseman, but without the caustic navel-gazing and self-destruction or the mordant pop-culture musings. Every milquetoast moment from the film is played too straight and sincerely to be funny, but it’s hard to take anything seriously when a man in a gorilla suit is drinking Genesee somberly on the couch. Throughout, one may wonder if and when someone will wink at the camera.

The film becomes increasingly twee and saccharine, as the profundity of art triumphs over commercialism (yeah, right) and Sylvio shoots hoops with a life-size version of his Herbert Herpels puppet in a dreamy, heavenly scene. But in the befuddling high concept of a sad gorilla in sea-foam-green chinos, Birney and Audley do find a few touching observations on the nature of fame and artistry. Monkeys and men aren’t so dissimilar after all.