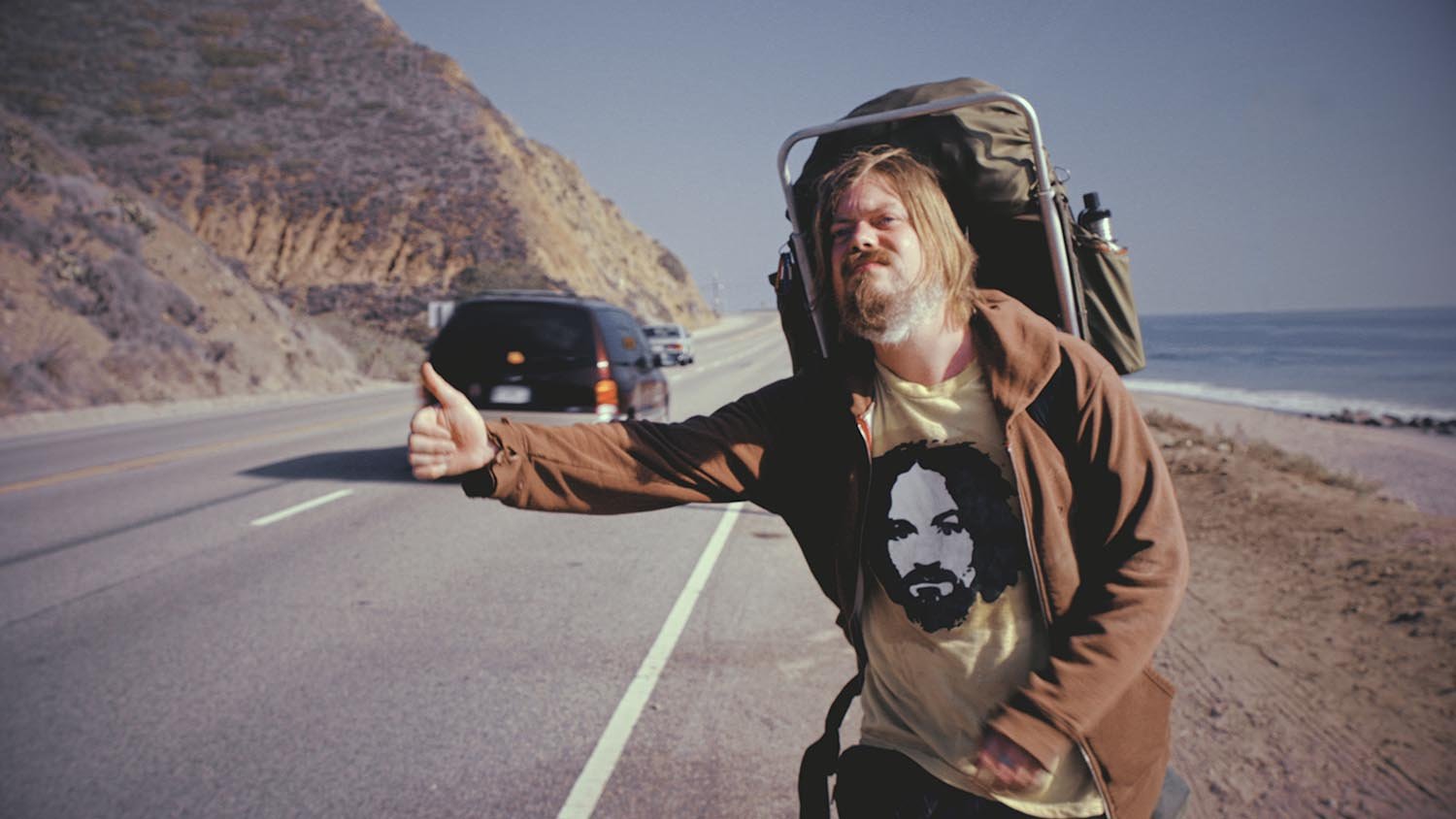 Writer-director J. Davis’s Manson Family Vacation is a disarmingly unpredictable tale of reconciliation between two brothers. When Conrad (Linas Phillips) shows up to visit his estranged brother, Nick (Jay Duplass), the two are revealed to be such polar opposites that it’s no surprise to learn that Conrad was adopted: Big, blond, shaggy, unemployed Conrad is laidback but radiates an air of outlaw unpredictability, while dark, slight Nick, a successful lawyer, is buttoned down from his shirt to his emotions. The shock is in learning that Conrad’s adoptive father and brother were relentlessly critical of him, denying him the love they shared with each other.

Nick’s disapproval is fueled on this visit by Conrad’s newfound obsession with Charles Manson, whom he talks about with a giggly excitement that suggests admiration. His obsession gives even the film’s most innocuous scenes a frisson of danger, leaving open the question of just how devoted Conrad is to the murderous Manson. Old news footage, which covers enough of the basics to clue in viewers who know nothing about Manson, focuses on his vision of family, with clips of the man talking about his childhood and what he wants for his son providing more fodder for the nature-versus-nurture debate that percolates under Nick and Conrad’s lifelong feud.

Davis keeps the dynamics between the brothers dangerously unstable as they zigzag between sparring over their family history and teaming up to help each other, like when Conrad gets Nick to relax with a game of pool or Nick uses his persuasive skills to talk Conrad into the La Bianca home he’s so eager to explore. That sense of instability ratchets up as the two encounter a group of Manson acolytes, in scenes that echo the TV series The Following, only with a sense of humor and without the exploitative wallowing in gore. Creepy as it seems at first, Davis’s focus on Charlie Manson and his cult of family turns out to be an inventive and effective way to dissect dysfunctional family dynamics.

The rural England of Guy Myhill’s The Goob looks a lot like our rural South, with long stretches of crops punctuated by unassuming houses and small roadside businesses. Dropping the viewer straight into the action without clunky exposition, the film delivers a vivid slice of the life centering on the Goob (Liam Walpole), as he’s called by his family, a lanky teenager whose summer is stained by the omnipresent shadow of his mother’s violent, womanizing sociopath of a live-in boyfriend, Womak (Sean Harris).

Womak nearly kills the Goob’s older brother in the scene that unfolds under the opening credits, and that’s hardly the only time he gets violent, but he radiates menace even when he does nothing at all. His macho sense of entitlement is telegraphed by the way he’s shot, often standing or sitting apart from the action and surveying the scene or riding astride a big piece of farm machinery driven by his sidekick, a burly man with a braided beard, looking for all the world like Mad Max 2’s Great Humongous.

But there’s ecstasy as well as agony in the Goob’s summer. Simon Tindall’s luminous cinematography brings out the beauty of the green and gold pumpkin crops he rides through on his little motorbike, and a wordless montage of his night-long first date with one of the migrant pickers who harvest the crops is transcendent. Editor Adam Biskupski cuts in flashes of various parts of the evening, from a bonfire dance with other pickers to a visit to the Goob’s brother in the hospital to the underground lair where the two wind up, transforming the grim bunker where Womak makes the Goob guard the fields at night into a cozy hideout.

Another engrossing, lightly comic exploration of a few awkward characters that is too original to fit into any particular genre, Andrew Bujalski’s latest feature, Results, is a neatly structured story with a thoroughly satisfying happy ending, yet it feels unpredictable and full of possibility. We first meet shlubby Danny (Kevin Corrigan) as he literally tries to crawl back to the wife who has locked him out of their apartment. When he shows up at a gym owned by Trevor (Guy Pearce), an earnest sort who speaks mainly in New Age-y clichés, it looks as if Trevor’s most popular trainer, Kat (Colby Smulders), is going to take this undisciplined loser in hand, motivating him to get as hard-bodied as she and Trevor. But as the three of them bump up against one another, it becomes clear that Danny’s “pudgy and mellow” philosophy is a lot more self-aware than Trevor’s “power for life” credo, and that Trevor and Kat need Danny at least as much as he needs them.

Bujalski establishes his characters and their relationships efficiently, exaggerating their traits just enough to invite our laughter without ever crossing the line from the endearing to the ridiculous. Danny, who’s just inherited a lot of money that he spends with casual indifference, has a habit of offering to pay $200 for just about everything that becomes funny as it is repeated, in the way that you laugh fondly at a friend’s quirky habits, and Trevor’s disastrous dinner with a douche-y idol he’s overly deferential to, a Russian “kettle bell master” played by a comically intense Anthony Michael Hall, is both funny and cringe-inducing. We never lose sympathy for these characters even when they’re being foolishly fallible, their behavior running the gamut from the sublime to the ridiculous.

Review: A Wolf at the Door