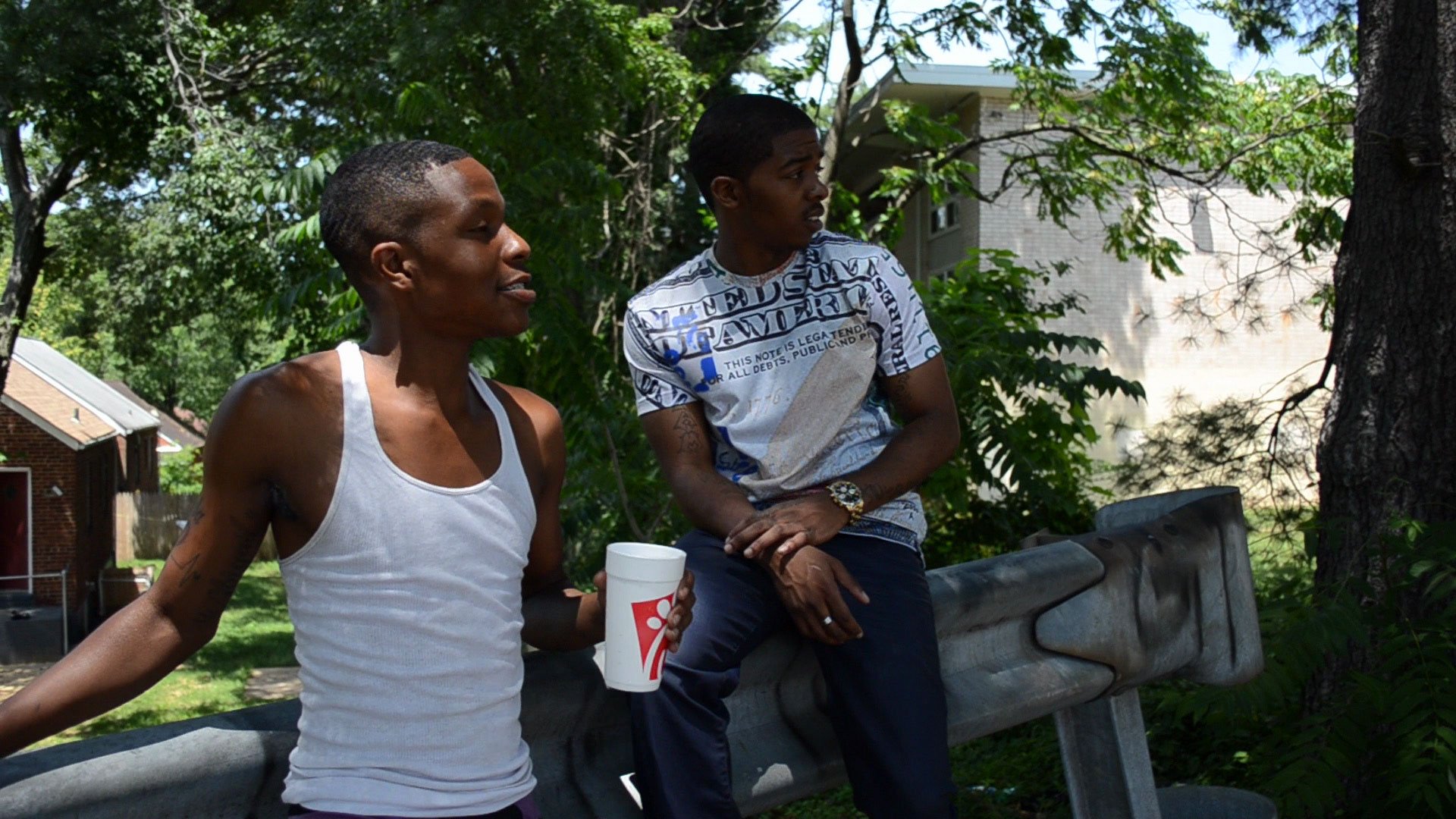 Joseph Frank and Zachary Reed’s Sweaty Betty has lopsided majesty. The staging is so loose it suggests the aesthetic of a home movie, in which scenes are shot with a casual sense of rhythm and coverage and allowed to play out for seemingly however long the performers are willing to inhabit them. This approach yields deeply expendable moments, with characters standing about or driving around in cars, riffing on which fast food is edible or whether some “legs” are going to be out on the street on a warm Father’s Day weekend.

The film’s sound mixing is so patchy as to require subtitles, which are also included to help audiences out with the frequent and occasionally lyrical street slang. And the acting is so rough as to suggest the presentational “found” qualities of a documentary, which Sweaty Betty is to a certain extent, partially inadvertently, partially quite strategically. The filmmakers offer a study of predominantly African-American neighborhoods bordering Washington, D.C. in Maryland, using fiction as an adhesive and a through line to tie their anecdotes together.

Yet, despite, or maybe because of its rawness, it doesn’t take long for the film to pull one onto its wavelength. Sweaty Betty is a reminder that poetry comes in all shapes and sizes, and that art ultimately dictates its own terms. Frank and Reed might be influenced by films, such as Killer of Sheep and Putty Hill, in which neighborhoods arise as a singular character of many interlocking personalities as embodied by the varying moods of its inhabitants. The directors lack polish, but they possess an abundance of instinctive empathy, which is sometimes oxymoronically intensified by the film’s formal amateurishness. In the middle of a rambling passage, a character, subject, or setting might stun one with a grace note that appears to come from nowhere, and this juxtaposition of the banal and the remarkable effectively mirrors the up-and-down pace of everyday American life.

Rico and Scooby, played by actors who are almost certainly riffing on their real identities, are 20-year-old single black fathers raising their children with the help of their own mothers—facts which the filmmakers bracingly accept as a given. No condescending pathos of the “broken home” are mined. These young men are given a pitbull out of the blue while walking the streets, and plan to sell it for quick cash. Much of their story concerns their gestures to find something to do while a dog they barely understand tugs at them, pulling against a leash that’s been fashioned from flimsy string.

Elsewhere, Floyd and his gang are a group of middle-aged characters from another neighborhood who care for a thousand-pound pig, Miss Charlotte, who they take to Washington Redskins games, adopting her as an unofficial mascot. Part of this story is certifiably real, as Floyd, whose last name is Rich, and the pig have been in the news, a portion of which is included in the film.

Rico and Scooby’s narrative barely connects to Floyd’s, but the stories share a theme: an awareness of animals as a source of companionship and communal rapture. Rico and Scooby might be looking for parties and legs, but they briefly derive a sense of comfort from the dog, which one of them memorably describes as being “cocaine white,” with a dark patch on its eye that might mirror the men’s own vulnerability. The dog helps Rico break the ice with a couple of young women outside a strip mall, in an encounter that’s strikingly rich in behavioral texture. Rico hits on the women so assuredly that the arrangement they strike up sounds preordained. Later, however, the women are described by the men as an “after-the-fact move,” as something to do should everything else bottom out.

Miss Charlotte provides this patchwork wonder of a film with most of its emotional heft though, as her scenes are almost unspeakably, intangibly moving. Frank and Reed first show her bathing in a creek behind a series of vividly cramped townhomes, her beauty and sense of self-containment representing an awe-inspiring acknowledgement of freedom achieved within the confines of a crowded place. The filmmakers don’t overplay the poignancy of such moments, allowing Floyd and his neighbor’s interactions with Miss Charlotte to speak for themselves, particularly a lovely interlude in which the pig is brought out in front of a pawnbroker shop-cum-beauty parlor to interact with football fans on the way to a game.

Miss Charlotte offers her friends a touch of the unusual, signifying possibility. Such moments accumulate, and it becomes evident that a more conventionally seamless approach to filmmaking probably wouldn’t have produced them. Frank and Reed foreground their love for their subjects, using enough technique to capture it, but not enough to sanitize it into a pop bauble rich in uncomplicated platitude.