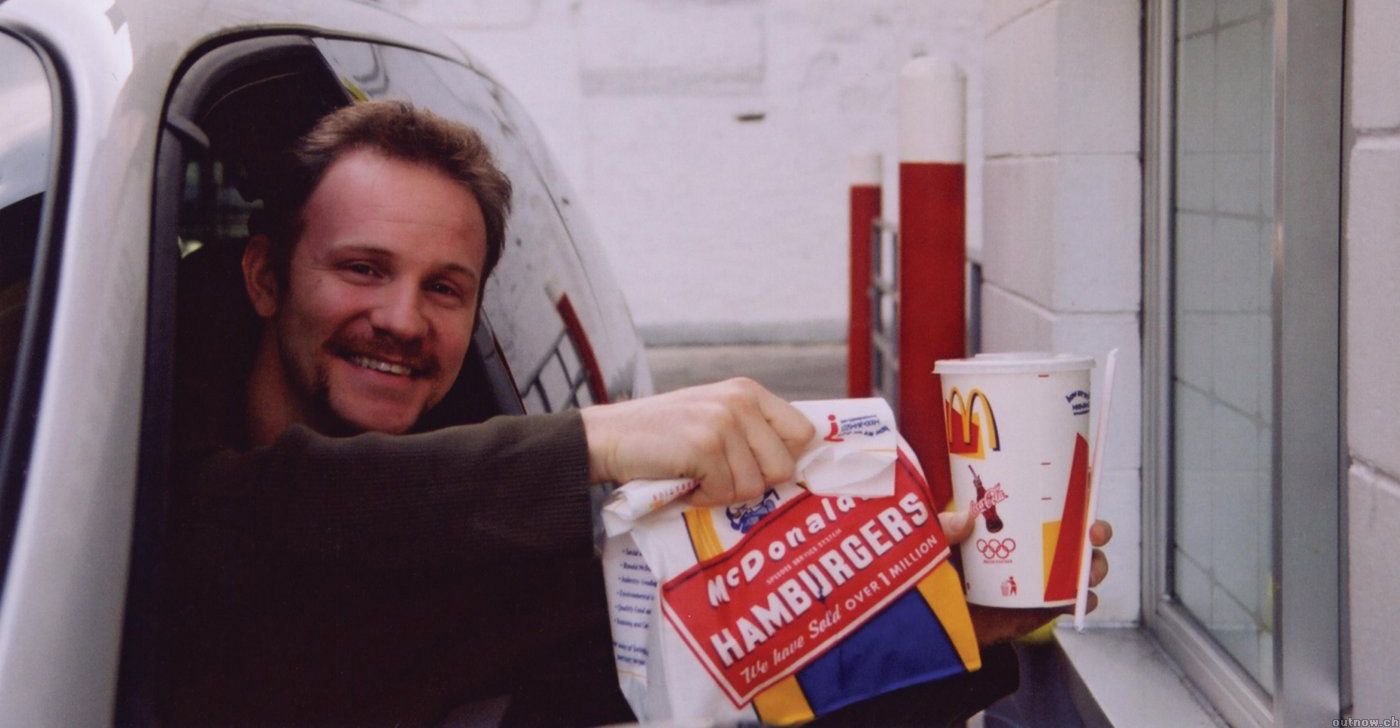 A smash hit at this year’s Sundance Film Festival, Super Size Me is Morgan Spurlock’s entertaining if not exactly eye-opening study of America’s obesity problem. Spurlock travels across the country, interviewing doctors, diet experts, and fast food junkies, all so he can come to the conclusion that eating lots of junk food is unhealthy. But how does Spurlock explain Don Gorske, a “Big Mac Enthusiast” who eats the popular McDonald’s burger up to three times a day but still looks like he could fit into size 32 pants? Well, he doesn’t. (Guess Gorske must have an awesome metabolism.) Spurlock obviously owes plenty to Michael Moore’s hip approach to documentary filmmaking. (How else does one explain the zippy graphics and clever toons that obsessively intercut Super Size Me throughout its lean 96 minutes?) Spurlock takes on the McDonald’s Happy Meal, but his film is a Happy Meal for those who can’t take the Frederick Wiseman diet.

Spurlock is a funny guy and he means to keep us entertained with his hip animations—you know, the same kind of graphics and sound effects fast food chains use to appeal to impressionable tots. Like Moore, Spurlock banks on the occasional investigative shockeroo (Sodexho, a company that provides school cafeterias with unhealthy food management, also services prisons), and he has an obvious beef with big corporations. In this corner: Personal Responsibility. In that corner: Corporate Responsibility. Spurlock dutifully exposes a scary psychological link between McDonald’s and the people who eat there: McDonald’s means to hook us when we’re young (with their playgrounds, parties, and meals that promise “happy”ness), but when does a person stop to look in the mirror and say, “I’m a fat pig”?

But Spurlock ignores or misses important associations (Americans work too much, and as such are often too tired to work-out; the effects of fast food chains in especially impoverished areas), and if it seems like he has very little time to champion solutions to America’s obesity problem (you know: exercising, eating in moderation), that’s because he’s too busy getting fat. You see: Super Size Me is a documentary with a gimmick. Instead of making a spectacle of himself by invading corporate ivory towers (like Michael Moore), Spurlock turns on himself: Over the course of 30 days, he eats nothing but McDonald’s for breakfast, lunch, and dinner, and reveals to his curiously shocked doctors that really high-fat diets can cause hypertension and high cholesterol levels.

This attention-grabbing stunt is getting the film lots of free press, but it proves nothing that any normal doctor doesn’t already know about the links between bad food and bad health. Forget that this stunt is completely irresponsible; Spurlock is a healthy guy, and he succeeds only in trivializing people with real eating disorders. The main hypocrisy here is that Spurlock takes on McDonald’s for exercising little to no ethical responsibility when selling burgers just as he’s needlessly getting fat in order to be able to sell a documentary. Spurlock knows he wouldn’t have an audience to pander to without the stunt (what doesn’t Super Size Me reveal that hasn’t been detailed on countless “Give Me a Break”-style news segments?), and as such he reveals himself to be as savvy and self-interested as that clown who’s feeding your children everyday.