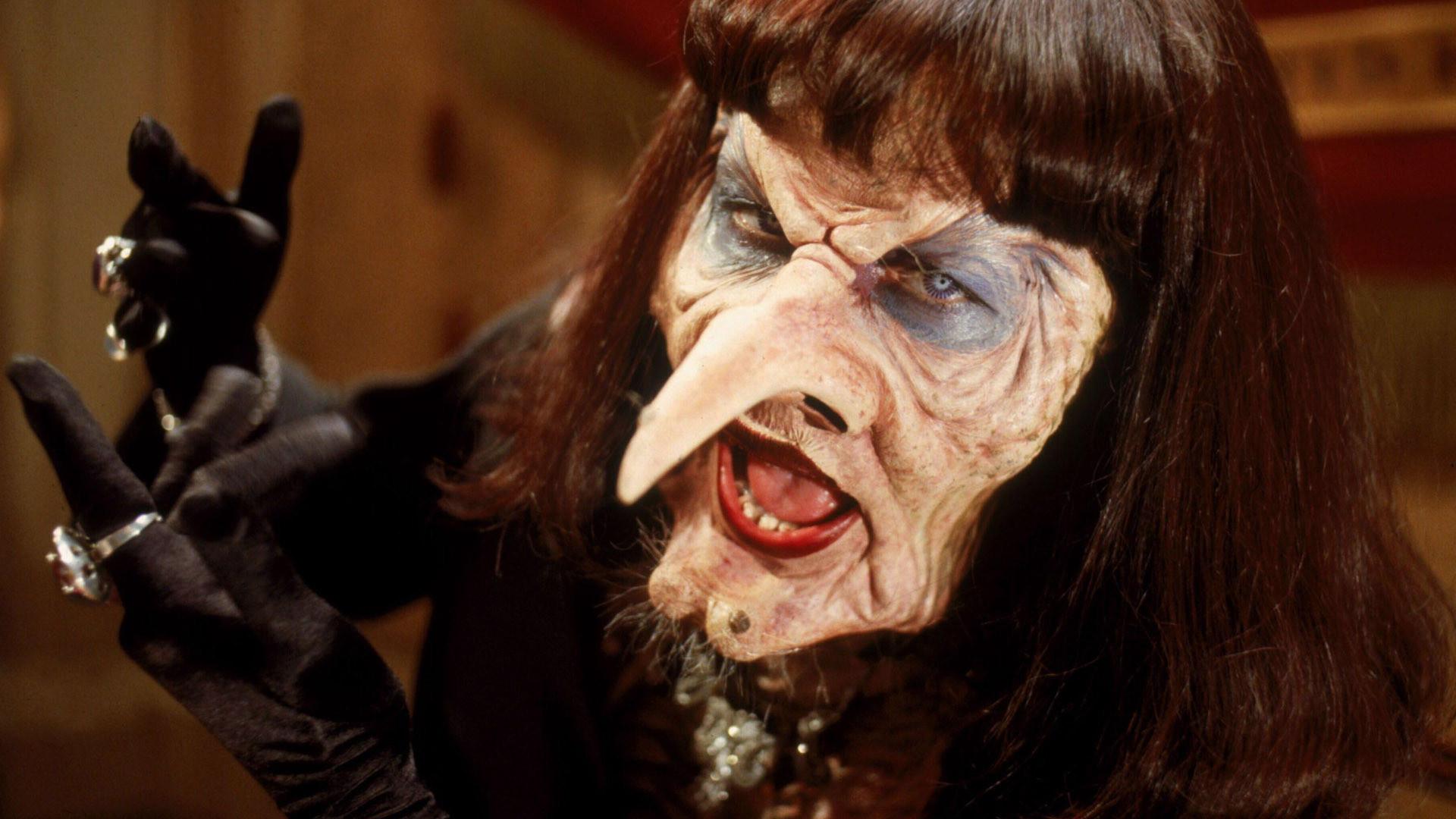 Children’s movies are traditionally designed to comfort. There’s an unspoken contract between parent and filmmaker: “For the next 90 minutes, your child will be entertained, but not threatened. No need to worry about your little darlings waking up at three in the morning, bawling in terror. This movie is guaranteed not to trouble anyone’s mind. Most people are inherently good. The bad guys don’t win.”

Children’s movies, for the most part, have abided by this contract, but for a brief period during the 1980s those rules went out the window. Children’s cinema was in transition¬. The old standbys, musicals and animation, were out, and sci-fi and fantasy were in. Disney and Jim Henson, in particular, were looking to forge new identities, away from their trademark brands. The result was Something Wicked This Way Comes, Watcher in the Woods, The Black Cauldron, Return to Oz, and The Dark Crystal. These films were guaranteed to give children nightmares, populated as they were by creepy carnivals, screeching lizard-like Skeksis, and rooms full of shrieking severed heads. Nicolas Roeg’s The Witches, released just as Disney’s renaissance restored the old rules, was the last and darkest of this bunch—the best and perhaps the only horror movie made for children.

The film is an adaptation of the book by Roald Dahl, one of the most beloved and sadistic of children’s authors. His stories make problematic transitions to children’s cinema. Dahl’s world isn’t comforting; it’s a cruel place where horrible things can happen at any moment. Kids are dumped into incinerators, tossed across a playground by their pigtails, stuffed into torture devices. Adults, usually fools or brutes, are of little help. Here, most people are inherently greedy, selfish, ignorant and deserving of punishment.

The Witches tells the story of a young boy (Jasen Fisher) who learns from his cigar-smoking grandmother (Mai Zetterling) that in every town lurks evil witches who love nothing more than killing children. These witches also know how to disguise their hideous appearances. “You can never be sure,” the grandmother says, “if you are gazing at a witch or just a kind lady.” While on vacation in an English resort town, Luke and his grandmother discover their hotel is hosting a convention of the Royal Society for the Prevention of Cruelty to Children, a front for the witches of England. The meeting is presided over by the Grand High Witch (Anjelica Huston), “the most evil woman in the world,” who plans to turn the children of England into mice—and she decides to use Luke and another boy, Bruno, as test subjects.

Soon after Dahl’s book was published in 1983, Jim Henson bought the film rights. Henson loved to push the boundaries of puppetry, and the hideous witches and transformations into mice would present a unique challenge to his Creature Shop. He decided not to direct, and made the strange but inspired choice of hiring Roeg to helm the film instead. A former cinematographer, Roeg had expanded cinema’s visual language in ‘70s masterpieces like Don’t Look Now, Walkabout, and The Man Who Fell to Earth, using fractured editing and unhinged camera movements to probe the human psyche. After a string of bombs in the ‘80s, his best work seemed behind him. None of Roeg’s films displayed a “family friendly” sensibility, but Henson believed the director would have an affinity with the book’s sinister style.

His instincts were right. The Witches contains gruesome images, but it’s the way Roeg presents them that makes it a genuine horror film. While most children’s films restrict their visual language to familiar stable camera shots, Roeg uses a combination of classic cinematic horror techniques—handheld camera, POV shots, extreme close-ups, and low angles and Dutch tilts—to create an atmosphere of chaos and terror.

In his memoir, The World Is Ever Changing, Roeg writes about The Witches as an example of the power of filmed images over pictures or words. “Roald Dahl’s book was rather creepy but it had very simple, sweet, charming drawings in it—so that the children wouldn’t get too frightened. If a parent were reading the story to a child and saw the child getting nervous about it or upset, the could shut the book, but once you take someone to the cinema and put them in a seat, you frighten the bejesus out them.”

The “Convention” scene contains some of the film’s most unusual camerawork. As the witches reveal their true forms, Roeg uses a shaky handheld camera. The effect disorients the viewer as well as making the scene appear more realistic. He zooms in for low-angled close-ups of the witch’s faces so extreme they distort the image. Some shots are tilted at an angle, throwing the audience off-balance. As Luke spies on the witches hidden behind a screen, the camera captures his partially obscured POV, and, in effect, we come to see through his eyes, hearing his shallow, frightened breaths. When the witches discover Luke and chase him down, Roeg cuts frantically between techniques, sometimes using them all in one shot. The result is a terrifying whirl, as the witches close in on us from all angles, gibbering, drooling, and clacking their rotten teeth.

At the center of Roeg’s stylistic excess is Houston, balancing effortlessly between high camp and horror. The Witches arrived only a few months before Huston’s Oscar-nominated role as Lily Dillon in The Grifters, and it’s nearly as impressive an achievement. Unlike the duplicitous Lily, Huston’s Grand High Witch is unrepentantly evil, and enjoys her wickedness enormously. According to her recent memoir, Watch Me, the role was an immense physical strain (it took six hours to put on her witch makeup and six more to take it off), but even under pounds of prosthetics Huston retains her mordant humor and a perverse gleam in her eye.

While designing her character’s look, Roeg suggested Huston make the witch sexier, and Huston ran with the inspiration. As the Grand High Witch in human disguise, Huston is imperiously alluring, striking poses like a ‘40s film star in a slinky black dress. When she reveals her true self¬, a cross between a lizard and a rotten corpse with a claw-like nose, hairy cleft chin, and foot-long talons, her movements become even more sensual. Just before destroying a witch foolish enough to defy her, the Grand High Witch caresses her mottled cleavage and puckers her red lips with coquettish, wicked glee. The effect is hilarious and repulsive.

Though the film is still considered among the darkest children’s movies, the released version is tamer than the original cut. “I remember running some rushes from The Witches at home on VHS,” Roeg wrote in his memoir, “and one of my young sons started watching it and then ran round and sat behind the television set.” Subsequently, Roeg edited out “a lot of stuff that was quite extraordinary” to make the film less frightening.

The main casualty was the film’s ending. In the book, after the Witches of England are vanquished, Luke is happy to remain a mouse. Mice live short lives, but he’s comforted that he won’t outlive his beloved grandmother. The two plan to spend their remaining years as a team, exterminating witches around the world. Henson considered that too dark, and invented a deus ex machina where a good witch magically transforms Luke back into a human. The result strikes a false, sentimental note; it almost seems like a parody of a traditional happy ending.

Dahl was furious to discover Henson planned to change his ending. He fired off an incensed letter to Henson, who offered a compromise: They’d shoot both versions of the ending, and see which played better. While the film was being edited, Dahl saw an early cut with his original ending intact, and the final scene moved him to tears. When he learned that Henson and Roeg had decided to use the “happy” ending for the film’s release, Dahl demanded his name be removed from the credits or he would start a publicity campaign against the film. Eventually, Henson convinced him to withdraw his threat. It was Henson’s final project, as not long before the film’s release he fell ill with bacterial pneumonia, and on May 16, 1990, died at age 53. And, then, Dahl would pass away several months later at the age of 74.

It’s not surprising that Roeg and Henson had to make concessions, but the altered ending feels like a betrayal of the film’s intention. Rather than protecting children from the horrors of the world, perhaps forcing a happy ending denies the child’s reality. In his landmark book The Uses of Enchantment, child psychologist Bruno Bettelheim writes about the importance of fairy tales, frightening fairy tales, in the psychological development of children. For kids, he argues, life can seem as incomprehensible and terrifying as any scary movie. By eradicating monsters from fairy tales, well-meaning parents “missed the monster a child knows best and is most concerned with: the monster he feels or fears himself to be…” Scary fairy tales or scary movies created for children give them a way to process their fears of themselves, and of the world. “If our fear of being devoured takes the tangible form of a witch,” writes Bettelheim, “it can be gotten rid of by burning her in the oven!”

Review: I Touched All Your Stuff