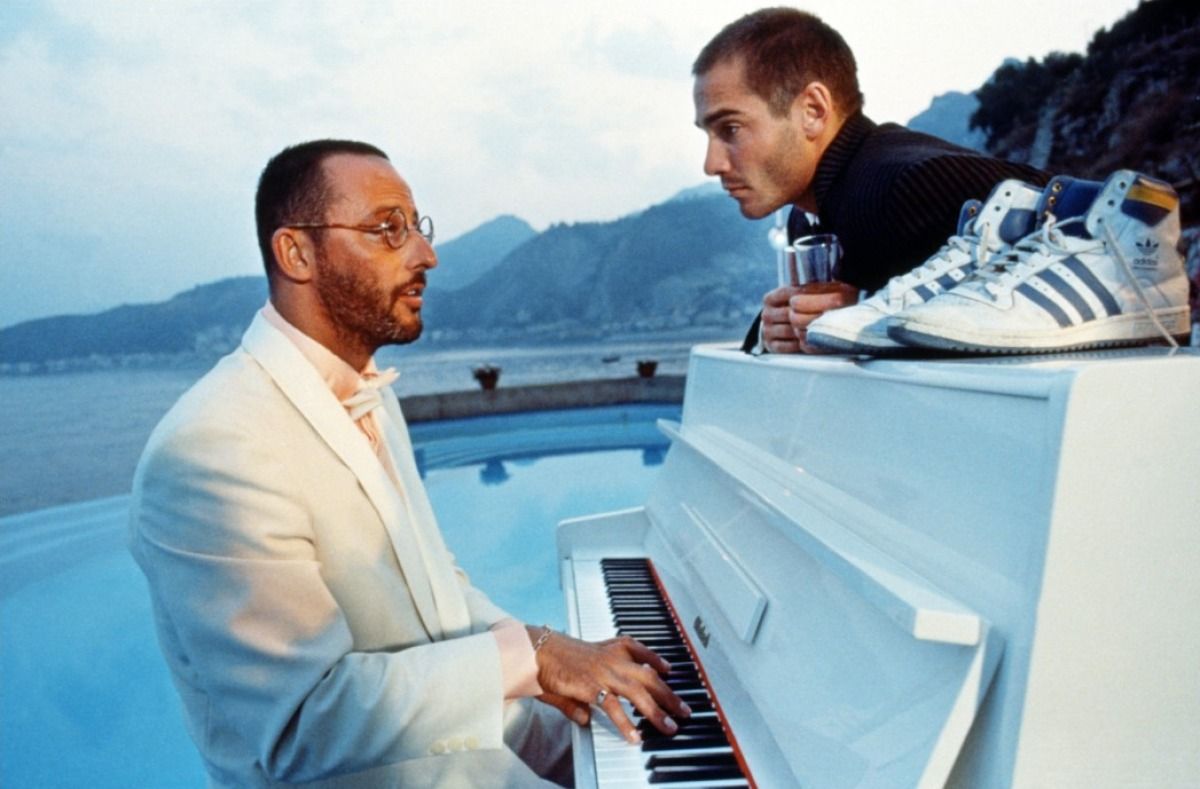 The most enduring critique leveled against the cinema du look is its fixation on surface, an obsession that reaches its apotheosis in Luc Besson’s The Big Blue. Soup to nuts, Besson’s deep-diving melodrama stresses its own depth—emotional, artistic, oceanic—while ping-ponging between its two lead frenemies: the gooey-eyed dolphin-whisperer Jacques (Jean-Marc Barr) and the brash, obnoxious, and charismatic Enzo (Jean Reno). With the screenplay torn between these broadly drawn extremes, no longtime Besson watcher should be surprised that the filmmaker is in top form as ringmaster, less so when he’s trying to be a poet.

Enzo and Jacques grow up in the same tiny Greek fishing village, showing off for neighborhood kids by diving for coins. Their relationship is established as adversarial, but in such a way that Enzo comes across as equally willing to help and challenge Jacques—a funny character contradiction that seems molded around Reno. Jacques is a nonstarter of a character and Besson seems to have known it, because when the narrative jumps from 1965 to the present (1988), the director first reintroduces Enzo, who’s continuing his bombastic shenanigans. By now Enzo has become a world-champion diver, and he’s inevitably bored to tears with his glory: free booze, hotels, and loose women.

What do you call a man who sinks to the bottom of a pool and glugs champagne while holding his breath, then wakes up in the middle of the night to go out and ride/dance with a dolphin? If you’re Rosanna Arquette that’s a “catch,” and her character Joana is dumbfounded by Jacques from the moment she first lays eyes on him. To describe Besson’s introduction of Jacques is to recognize its absurdity: Jacques emerges from diving in frozen water in slow-mo, plowing gently toward the camera in his wetsuit with hard sunlight blasting down on the glaciers around him. Eric Serra’s twinkling, swooning synth soundtrack is top-drawer ‘80s cheese, drizzled onto every long close-up of either Jacques or Joanna staring at each other, and there are many.

Jacques and Joanna join Enzo as he hauls his extended-stereotype family around the world to win competitions, eat pasta, and make a scene. Besson repeatedly falls back on the dynamic of the new couple observing and being amused by Enzo, a kind of screenplay “wingman”-ing. This allows their intimate moments together to be scarce and sex-oriented, as is inevitable the night before a deep-diving competition in Sicily. This was, as they say, a date movie. Besson reliably fudges generosity and self-parody in dramatic scenes, but these moments—usually capped with the moon reflecting off the beach with splashing and laughter in the background—are so flamboyant in their naked emotion that it almost works.

After being lured (invited, really) by Enzo to join him in the competitions, Jacques begins besting him constantly. Enzo isn’t mad, but he ups his game accordingly, more or less okay with being second in the world only to his childhood friend. But this is where The Big Blue turns serious, and as suits a movie of this size, Besson inevitably compromises his fundamental interests. The more interesting character (Enzo) must take a life-and-death chance, and the love story between Jacques and Joana isn’t compelling. Once they’ve settled into the groove of sleeping together, they can’t make it work; he’s distracted to the point of callousness, and however poorly sketched her personality is during their initial meet-cute, Joana’s shrieking demand to be acknowledged as a woman—and eventually as the mother of his child—makes her the more sympathetic character by default. All Jacques wants to do, and can do, is swim with dolphins.

Besson’s stately, mega-widescreen filmmaking relies on fewer shots than many directors of his generation, and this primal yearning for minimalism gives the story another layer of autobiographical paint. Eventually Jacques and Enzo join one another in a kind of two-man death cult, as the world record for diving sinks deeper and deeper; the only trait attributable to both men is their nihilistic obsession with the sea, but Besson, who had been a diver before being badly crippled and transitioning into filmmaking, provides no further character details. The tragedy that overwhelms their friendship has less to do with misfortune than their own core personality deficiencies, and the filmmaker doesn’t try to pretend much else.