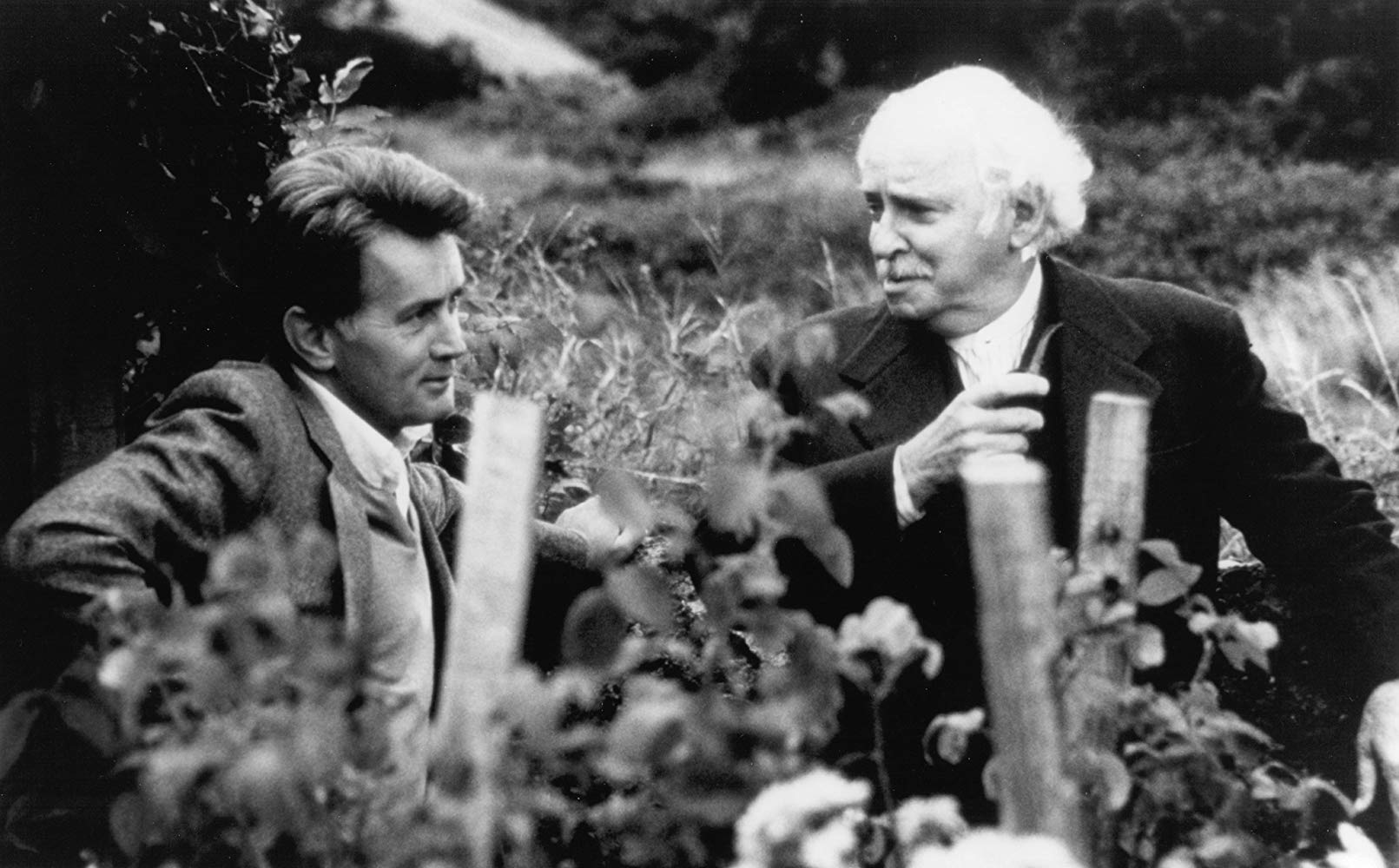 If you dream of a monosyllabic title for your hit play, you can’t get any more evocative than Hugh Leonard when he gave his the simple name of Da. Not only is it short, not only does it spell out the theme of filial sentiment in a single flap of the tongue, it damn near makes sense visually. The two bulky letters face each other, different in size and stature, forever at odds and yet inseparable. Like father. Like son. Duh.

For a brief moment in the late ‘80s and early ‘90s, it seemed Ireland could have done no wrong in terms of movies that were unashamedly local and universal at the same time. The same feat would be repeated by Iran in the mid-‘90s and by Romania in the new millennium, but the string of Irish films of note—starting out with The Dead, Eat the Peach, and Da, and culminating with the golden era bookended by Jim Sheridan’s My Left Foot and In the Name of the Father—has been hugely inspiring in terms of attracting global audiences to local themes. (In fact, one of the best films of the entire surge was John Irvin’s Widows’ Peak, based on a script by no other than Leonard.)

I have a special fondness for Da: Leonard’s play is one of several I translated into my native Polish, and it’s also the only one of those to be published. Naturally, I spent a long time with Leonard’s words. As I ploughed through the text, I wondered how the whole thing would work on the stage, given its complex time structure. This I’ve yet to discover; the movie, however, still works very well.

The story of a successful New York-based playwright, Charlie (Martin Sheen), whose father’s death makes him dash to Ireland for a hasty funeral, is in fact an excuse for what’s largely a high-concept two-hander. It’s not long after Charlie’s arrival that his dead Da starts talking to him, the first words coming from inside a casket (Leonard himself appears as one of the pallbearers). Sheen’s retort (“Shut up!”) sets the mechanism of the play in motion. Not only isn’t Charlie shocked by pops’ posthumous rants, he consorts with him, fights with him, as well as revisits many crucial scenes from his own life. Leonard’s memory-lane conceit harkens back at least to Bergman’s Wild Strawberries, but allows its main character more freedom of imaginary interaction—also with his younger self, played here by Karl Hayden.

Long before Six Feet Under made visitations from beyond the grave the order of the day in family dramedies, Da used the device for a relaxed, if occasionally sad, meditation on the inevitability of father-son animosities. Da, as played by Barnard Hughes in a slightly hammy performance he originated on Broadway (and to Tony-winning results), is a loudmouth and teller of tall tales, whose constant patronizing of his son drives both the younger and adult Charlie nuts. Sheen is the subtler actor of the father-son pairing; his Charlie is both annoyed at his father and affectionate toward him, even though he makes it very clear he wishes to let go of the paternal influence that defined his life. (All that despite the fact that he’s Da’s adopted child, which is revealed quite early on and thus rendered weightless as a plot point.) Likening his father to “a wasp in my brain,” Charlie isn’t free of his presence even after coming back to New York and seemingly exorcising the ghosts of the past.

When asked about his favorite author, young Charlie names Shakespeare. The adult Charlie, witnessing the recollection through the film’s time-bending magic, calls him a liar for that, but there’s no way around the fact that Da flirts with Shakespearean themes, King Lear and Hamlet being the main points of reference. After all, according to the latter, nature’s “common theme is death of fathers,” and the long process of saying goodbye is what forms the main arc of the play and the movie (which, incidentally, uses some material included in Leonard’s novel Home Before Night). The second underlying theme is that of Charlie’s dream of a better life, symbolized here by his moving to the United States. While Charlie gets the real, Manhattan-based thing, his father ends up with a pitiful token of American life: a lump of spectacles, melted together in the fire caused by the 1906 San Francisco earthquake. It’s that excuse of a gift from Da’s patronizing employer that pushes Charlie toward emigration; seeing his father being awarded a piece of garbage after 54 years of tender gardening is too much to take.

Da’s most moving scene comes near the end, when Charlie confronts his father just as his dotage turns into full-blown senility. The old man mistakes his son for his late wife’s father, and speaks to him as he once spoke while requesting her hand in marriage. Thus, the father asks his son the permission of marrying his mother—an Oedipal heyday if there ever was one—and elicits consent for the son’s existence from the son himself. It’s a beautiful moment, as simple in execution as it’s convoluted in implications; much like the movie itself.