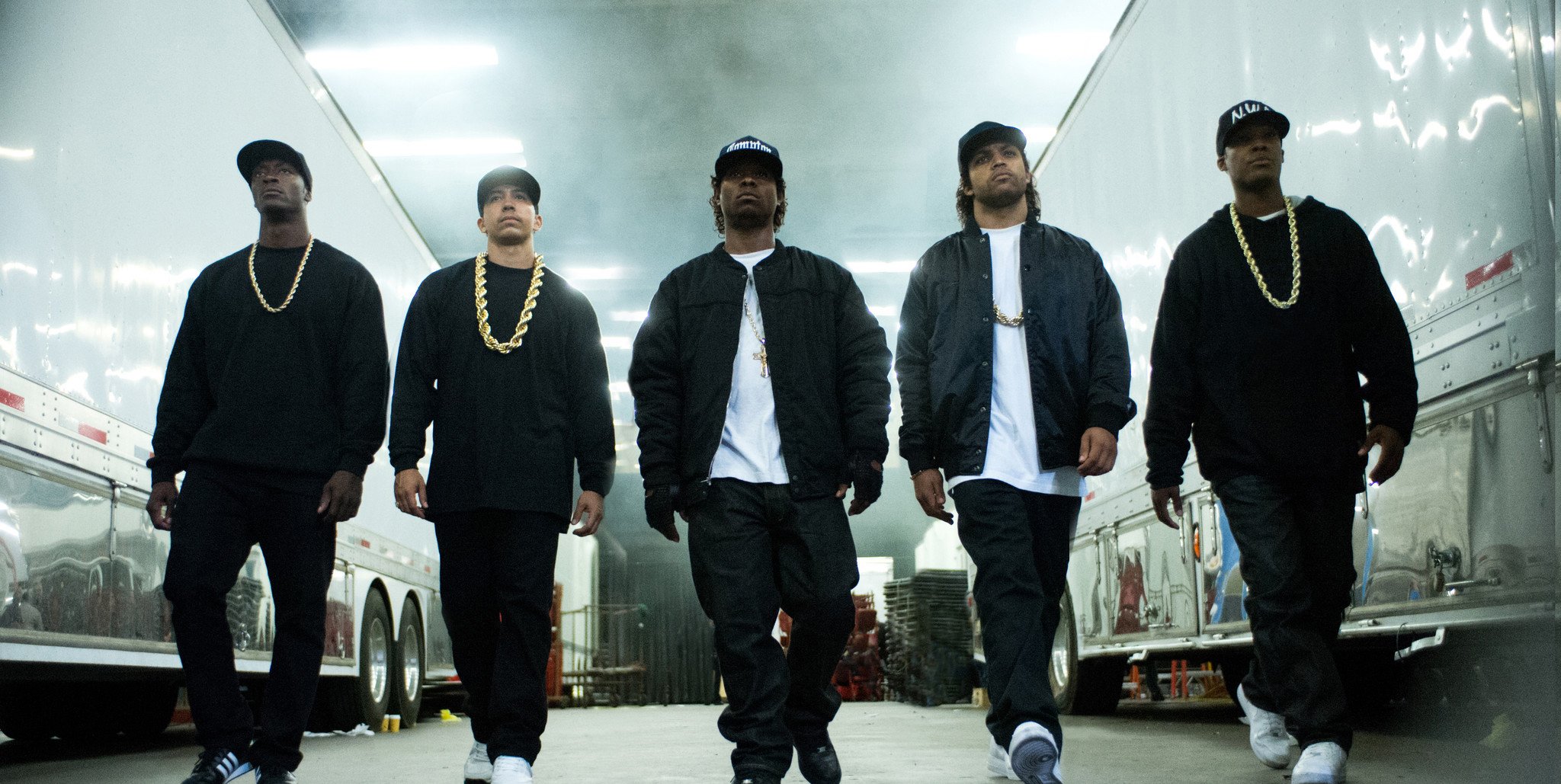 A gourmet, wide-canvas take on the woebegone rise-and-fall musician biopic we’ve all seen a hundred times, F. Gary Gray’s Straight Outta Compton was doomed to contain multitudes: It’s a steely un-action picture about police racism, a liner-notes history of West Coast gangsta rap, a musical family tree charting influences and samples, a rumination on the stakes of inner-city survival, a loving valentine to a bygone era when mainstream rap actually posed any kind of challenge to the American political establishment. When a young Dr. Dre (Corey Hawkins) aligns with hotheaded crack dealer Eric “Eazy-E” Wright (Jason Mitchell) and a blustering prodigy MC named Ice Cube (O’Shea Jackson Jr., son of the real Ice Cube), in Reagan-era Compton, Niggaz Wit Attitudes is born—and the group’s disparate histories are retold as if to achieve maximum balance between juicy real-life anecdotes and the hip-hop lore that’s haunted the N.W.A legend to this day. That Gray’s film manages to embody any of these threads without completely losing its tactility—that its set pieces manage to be brash, exhilarating, and even occasionally moving—is its most towering accomplishment.

But more than anything else, Straight Outta Compton is a capital-A authorized biography, a narrative product sanitized (and de-misogynized) to the point of occasional parody. (Nary a joint is lit on screen until 1993, seven years into the tortured screenplay’s sprawling chronology.) What remains is largely a string of Greatest Hits, orchestrated to re-emboss the N.W.A brand for future generations. Potentially complicating characters, like N.W.A. co-founder Arabian Prince, or labelmates the D.O.C. and Above the Law, are kept peripheral at best, while the group’s other two surviving members, MC Ren (Aldis Hodge) and DJ Yella (Neil Brown Jr., figure heaviest on screen only when Gray needs yet another slow-motion vista of the group walking apace like superheroes. (In real life, Ren has expressed lasting displeasure with the film’s reduction of N.W.A history, even while making press rounds as one of its honorees.)

Given these gnashing influences, then, it’s damn hard locating the emotional interiority of Straight Outta Compton’s screenplay. The saga of Ice Cube (who, alongside Dre and Eazy’s widow, executive-produced the movie) fares the best, in a walk: Jackson doesn’t just imitate his famous father, but manages to embody his piercing insight, no-bullshit sneer, and crystalline cadence. Even the potentially corniest Behind the Music-grade moments—as in Cube, dissatisfied with an exploitative contract at Priority Records, taking a Louisville slugger to the gold-plated records hanging on the office walls—are performed with startling vulnerability, prompting otherwise unexplored questions about what it must feel like to gain such prominence at such a spectacularly young age.

When that’s not happening, the backward-tense retelling can’t help but disengage the characters from their supposedly concurrent dilemmas. Cube’s disenchantment with the group, and the rip-off tactics of villainous manager Jerry Heller (given a surprising bit of nuance by the script, but far more, still, by Paul Giamatti) makes for a compelling single arc. The same can’t be said for, inevitably, watching Dre and Eazy slowly arrive at the same set of realizations; a riveting, whole other psychodrama about Dre’s unholy alliance with Suge Knight (R. Marcos Taylor) at Death Row Records peeps out from Straight Outta Compton’s second half, but by then it’s way too late. The narrative can barely wrap itself up in time for Eazy’s AIDS diagnosis, and his inevitable deathbed sequence lays bare the character’s prior persona, essentially a lovable simpleton torn between his allegiances to Heller and to his bandmates.

While the film more than delineates the circumstances of N.W.A’s genesis, their lyrics—and the subsequent controversy—appear, in essence, an afterthought. We never see raps actually being written; songs are rarely discussed by their makers, and characters brandish notebooks and pages in passing, Matthew Libatique’s camera hanging back with quintessentially elegant pictorial cool. In a single swirling camera movement, Dre fumbles his way to the iconic synthesizer chords of “Nuthin But a G Thang,” and Snoop Doggy Dogg (Keith Stanfield) is there to jump on the track instantaneously—one of many florid displays of improvisational catharsis among musicians. Inspiration has a way of appearing just in the nick of time—so a harrowing shakedown outside the recording studio, wherein police humiliate the group in front of Heller solely on the suspicion of being gangbangers, singlehandedly jumpstarts Cube’s verse leading “Fuck Tha Police”.

One early, pivotal scene is an exception: The recording session for what would become Eazy’s first hit, “Boyz-N-The Hood,” is rendered as a painstaking comedy routine, consisting of first takes blown—hilariously, painfully, repeatedly—by Eazy. Eventually, with Dre’s guidance, the young MC smooths out the first line of the song, and in the next scene, the guys and their girlfriends are sitting around listening to the finished version, 40s in hand, gaily chanting along to Eazy’s vocals. Would that pretty much any other aspect of N.W.A.’s creative process were given this level of imagined detail.