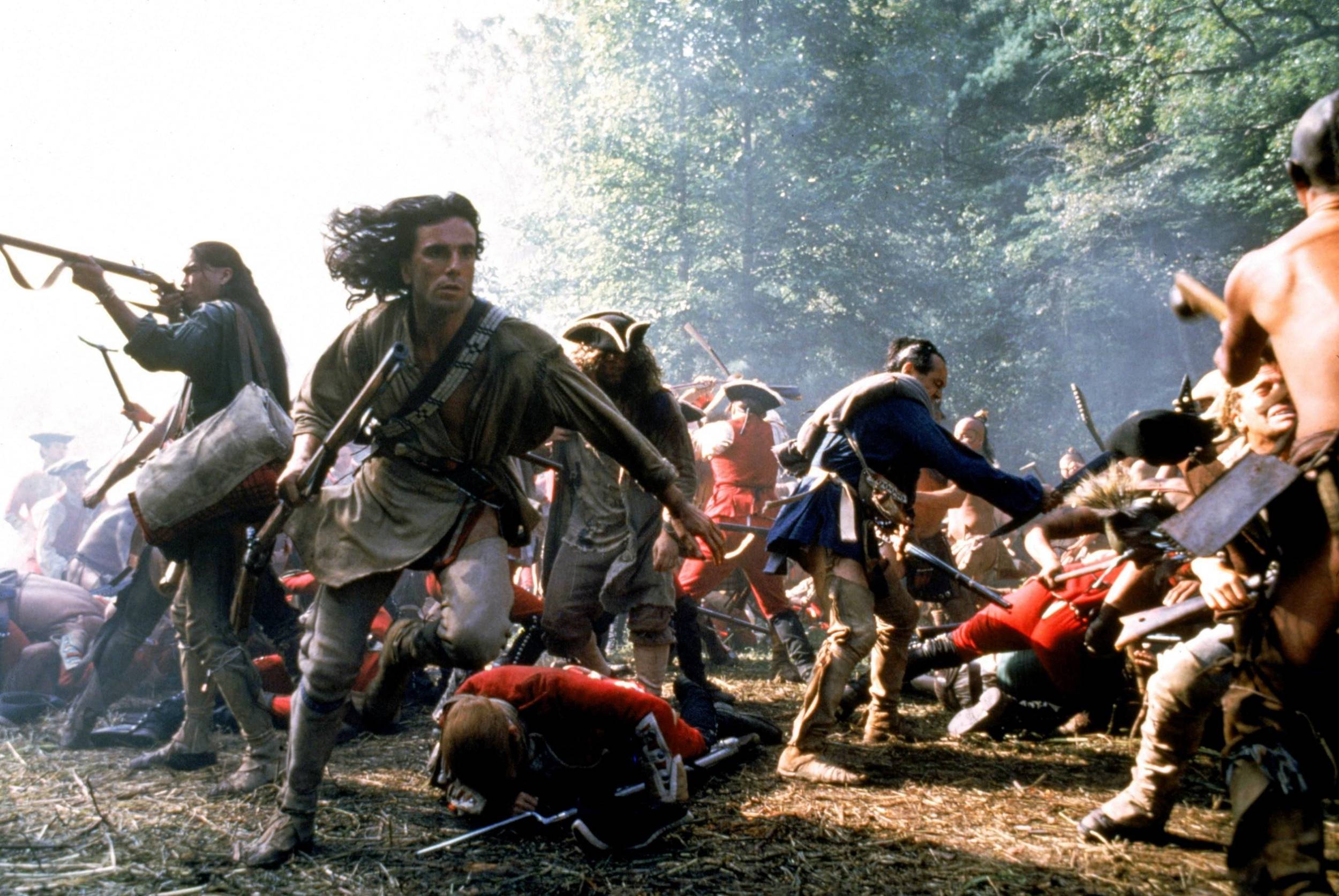 A romantic drama set during the French and Indian War, Michael Mann’s The Last of the Mohicans is a primal epic of survival and the overpowering urge to reproduce. Reworking the same-named 1936 movie, Mann and co-screenwriter Christopher Crowe transform their literary source, James Fenimore Cooper’s chaste frontier potboiler, into a passionate tale of tough, simple men fighting and dying for land and women. In the movie’s political/historical background, Native tribes, white settlers and British and French military forces compete to control the mountains and forests, which they hope will be overrun someday by their descendants. Mohicans shows that both an individual’s goal to mate and pass on genes and a civilization’s desire to possess and transform the land issue from the same biological urge. As articulated in the original 1992 version, and deepened in Mann’s 2002 director’s cut, the major characters are driven by the need to control, protect or perpetuate their bloodlines.

Mann and Crowe’s sustained comparison between two prizes—land and women—is established in the picture’s spectacular opening sequence. After a terse, scene-setting title card, Mann reveals the story’s geographical and metaphoric prize: the wilderness of upstate New York (actually North Carolina, where much of Mohicans was filmed). Shooting in CinemaScope with long lenses, director of photography Dante Spinotti flattens and abstracts the blue-green mountains to emphasize their rising, falling curves, than pans elegantly from right to left, inviting us to caress those curves with our eyes. The next shot is a static panorama of converging mountains that unexpectedly tilts down, swooning into triangular valley shrouded by mist.

Then we meet our heroes—Nathaniel, his adoptive father Chingachgook and Chingachgook’s blood son Uncas, stalking and killing a deer. After blessing the deer’s carcass, the hunters visit friends in an isolated cabin—a married couple named Alexandra and John Cameron (Tracey Ellis and Terry Kinney) and their young children. Alexandra remarks, “Why is Uncas with you? He should have settled with a woman, started a family by now.” Nathaniel says they’ll winter in “Kentuc-kee” and jokes that they’ll “find a Delaware-speaking woman for Uncas. She will say, ‘You are the one!’ and bear him many children!” Upon repeat viewings, these lines ring with sadness; Chingachgook and Uncas are the sole survivors of a once proud bloodline—the last of the Mohicans. As the tale unfolds, Uncas will find a mate, then perish defending her.

Mann and Crowe’s script repeatedly invokes blood and bloodlines, hearts, wombs, marriage and “seed.” Early in the movie, when Cora rebuffs a marriage proposal by Duncan—an emblem of the boring old England she left behind—the English officer’s arrival is heralded by a long shot of his carriage traversing a bridge over a river; as framed by the filmmakers, the bridge’s arch and the arch’s reflection in the water below create a perfect egg shape, smack dab in the center of the frame. When our tracker heroes save the Munro sisters from a Huron assault, Cora cozies up to Nathaniel, and admits that the American frontier is “more deeply stirring to my blood than any imagining could possibly have been.” Cora’s beauty and bravery mark her as an idea frontier wife, transforming Nathanel from single warrior to committed mate so rapidly that neither of them have time to contemplate the change. “I don’t call myself subject to much at all,” Nathaniel jokes in an early scene, a slap against government that also alludes to his lack of romantic attachments. But midway through their journey, in one of the simplest and most powerful statements of commitment in American cinema, he tells Cora, “You be strong, you survive…Stay alive, no matter what occurs. I will find you.”

Nathaniel’s monologue about the origin of the stars reinforces the film’s symbolic architecture, which is intensely concerned with sex, reproduction and the idea of legacy. “My father’s people say that at the birth of the sun and of his brother the moon, their mother died,” he tells Cora. “So the sun gave to the earth her body, from which was to spring all life. And he drew forth from her breast the stars, and the stars he threw into the night sky to remind him of her soul.”

Magua, whose own bloodline was destroyed by Col. Munro, vows vengeance against Munro’s family: “When the Grey Hair is dead, Magua will eat his heart, Before he dies, Magua will put his children under the knife, so the Grey Hair will know his seed is wiped out forever.” Sweet, stoic Uncas seizes a chance to extend his own endangered bloodline by protecting helpless Alice. But late in the film, after the Munro sisters have been kidnapped by a Huron war party, a Huron chief imperils Uncas’ dream, giving Alice to Magua in so that Magua can pass on his bloodline and “heal his broken heart.” During the film’s climactic mountaintop battle, Magua cements his claim on Alice by killing Uncas in hand-to-hand combat. In a powerful yet ambiguous gesture, at once imperious and needy, Magua beckons Alice with a hand stained by Uncas’ blood. But Alice is so horrified by Magua’s ruthlessness that she would rather leap off a cliff than become his mate.

Incidental characters and situations reinforce the film’s sense of biological urgency. Throughout “Mohicans,” men and women struggle to reunite after violent separations, or prevent their mates or offspring from being wiped out. A dramatic crest occurs in the film’s last act, when a Huron chief orders that Alice be given to Magua and Cora burned to death. Nathaniel reflexively offers to die in Cora’s place. But Nathaniel’s romantic rival Duncan, who serves as translator in the scene, manipulates the proposal so that Duncan is the one volunteering to die. Duncan perishes so that his beloved Cora—the woman who resisted his marriage proposal—might survive. In the end, Mohicans is less an action picture, a romance or war film than a fierce and beautiful dream about fighting, rutting, dying and leaving behind some trace of yourself. That so many characters fail to realize the last part gives the picture a melancholy feeling rarely found in Hollywood epics. The sadness is most pervasive in the last scene, which finds surviving characters Nathaniel, Cora and Chingachgook standing on a mountaintop surveying the land so many people died to possess.

“The frontier moves with the sun and pushes the Red Man of these wilderness forests in front of it until one day there will be nowhere left,” Chingagchgook says. “Then our race will be no more, or be not us,”

“That is my father’s sadness talking,” Nathaniel says.

“No, it is true,” his father replies. “The frontier place is for people like my white son and his woman and their children. And one day there will be no more frontier and men like you will go too, like the Mohicans. And new people will come, work, struggle. Some will make their life. But once, we were here.”

This piece was originally published in the 2005 National Society of Film Critics anthology The X List, and my Star-Ledger article on the original NBC series can be found here.