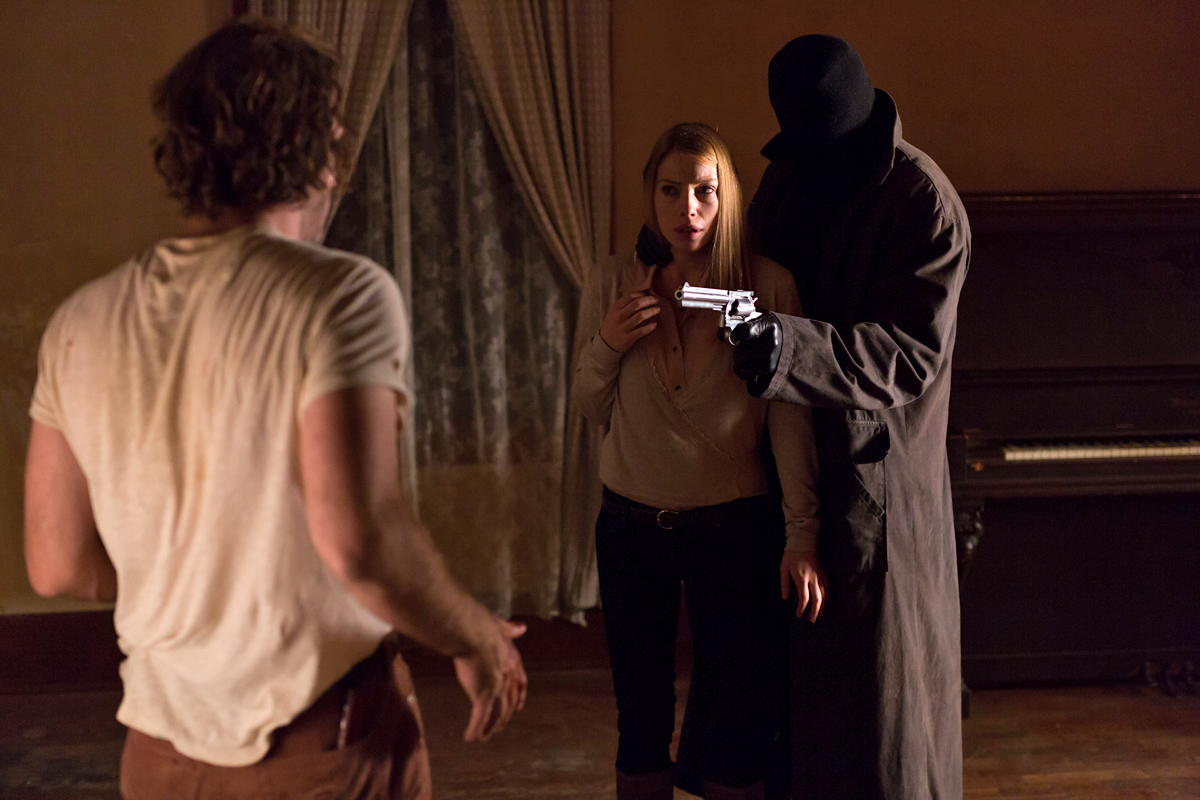 A few minutes into Standoff, a large man dressed from head to toe in black massacres people attending an outdoor funeral. The all-blackness of the man’s apparel is unnerving, suggesting certain images of the killer from David Fincher’s Zodiac. Plus, the largeness of this killer is prodigious. Cat-burglar gear lends itself to the stereotype of a svelte acrobat, while this figure suggests a gun-toting colossus, highlighting his alien-ness at the funeral, as well as the extremity of the violations he commits. Then the man pulls his mask back, and he’s revealed to be Laurence Fishburne, who operates here in an ironically erudite, slightly loony, and B-movie bad-guy mode, grounding this initially scary opening in the familiars of action-genre routine.

Fishburne is a pleasure to watch even when he’s slumming, and he invests Standoff with a certain WTF energy that threatens to steer the film into the territory of a comedy. The flippancy with which his character—a best-of-the-best assassin, of course—buries his victims in the cemetery is unexplainably funny, and the timing of the filmmaking suggests that this impression is intentional. Writer-director Adam Alleca emphasizes the character’s matter-of-factness with quick cuts, as he tosses people into an empty grave like sacks of dirty laundry. This killer is so pronouncedly amoral he’s amusing.

Fishburne’s character, Sade, soon finds himself in the sort of huge, iconic, nearly abandoned American gothic farmhouse that seems to only exist in movies. This home is occupied by Carter, a troubled veteran with a history of heartbreak, who’s played by Thomas Jane with a sense of slightly cracked earnestness that also suggests an actor’s knowing parody of a cliché. Sade and Carter are in opposition over the fate of a little girl, Bird (Ella Ballentine). Sade wishes to kill her, as she saw his face while he was executing his business at the cemetery. Carter, presumably cut from more conventionally moral cloth, insists that she not be killed. And so we have a standoff: Sade holes up in the bottom of the farmhouse, swigging bourbon while tending to a gunshot suffered from an initial exchange of not-so-friendly fire with Carter, while Carter, also swigging bourbon, guards Bird upstairs, with only a single cartridge in a gun that Sade deems unworthy as an execution weapon.

Standoff could have used more inventive dialogue during the long vigils spent anticipating the central face-off, and a torture sequence, tediously apropos of the American action genre, is regrettable. Yet the film is also weirdly and cheekily rueful, suggesting Home Alone as written by a genre scribe who might secretly fancy himself the next Sam Shepard. The charismatic actors are weary of their roles without condescending to the material, and the leanness of the concept (one set, three characters) is becoming for an under-the-radar thriller inexplicably featuring a pair of respected character actors. Alleca’s filmmaking is efficient and occasionally even elegant, as illustrated by a single shot that shows both Sade and Carter occupying their respective portions of the latter’s home, resting and planning their attacks. Standoff isn’t quite inspired, but it coasts on unexpected modesty of professionalism.