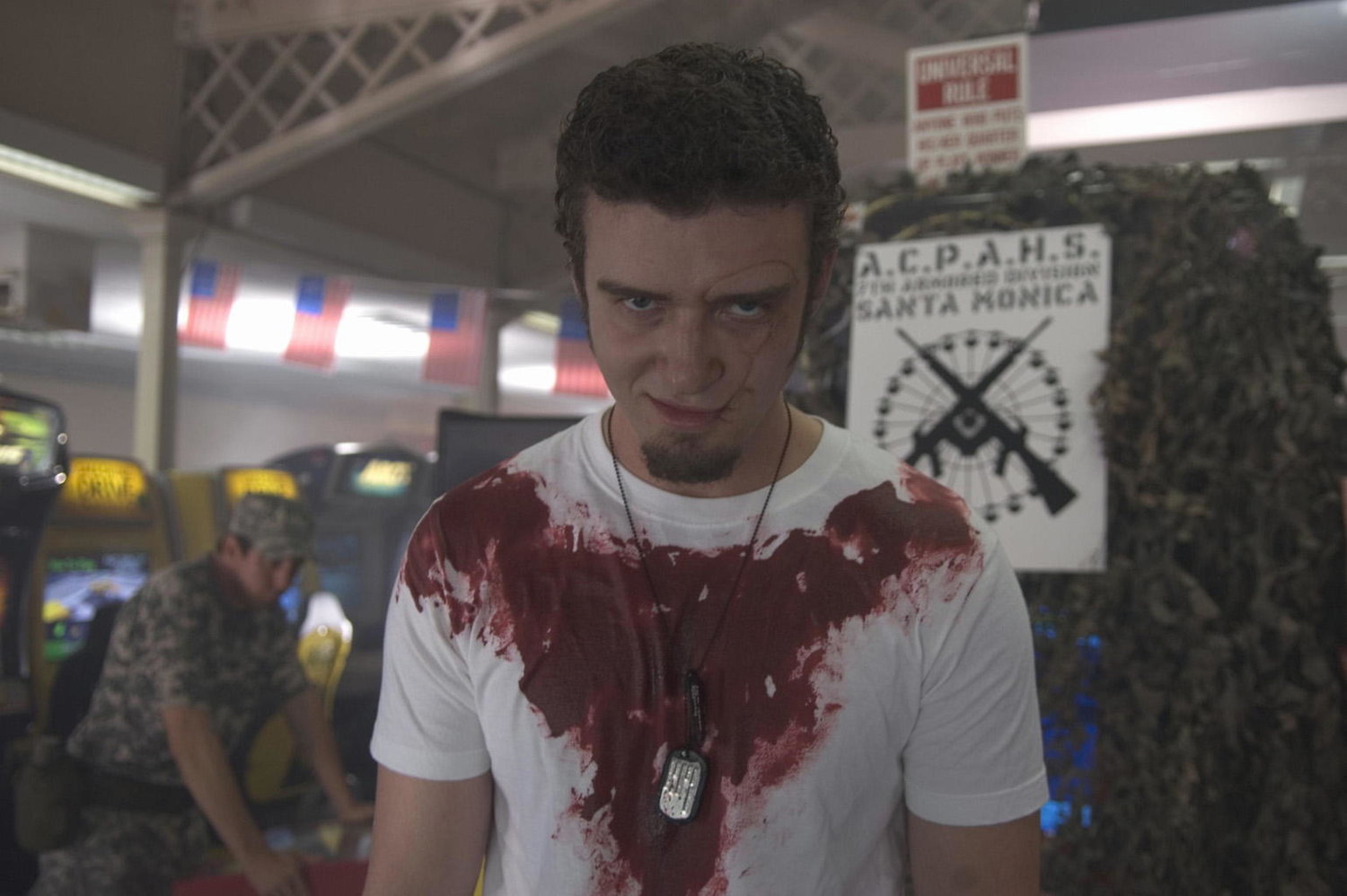 A pre- and post-apocalyptic mashup of epic proportions, Richard Kelly’s likably self-indulgent Southland Tales is a midnight movie to be reckoned with, even if it winds up being sharper about the surreal effect of junky pop-culture symbols than about anything relating to politics, the beleaguered earth, or the time travel tropes that he treated more fully in his first feature, Donnie Darko. In that cult classic debut, set in a lovingly re-created 1988, upsetting feelings of teen loneliness and rage amid suburban comfort were burnished by cannily selected sightings of forgotten pop icons. Kelly explored Donnie’s pain and took in piercing glances at the more adult pain of the ensemble cast, but his film was really about seeing how great Katharine Ross looked at age sixty, and about laughing at the mere sight of Patrick Swayze. It was about a sinuous tracking shot set to Tears for Fears’s “Head Over Heels.” Like so many first films, it was about the joy of making a movie.

Southland Tales leaves behind the humanism of Donnie Darko and amps up the weird celebrity signage. After getting booed at Cannes, Kelly spent fourteen months re-editing it, taking out about twenty minutes; it moves swiftly and buoyantly now, creating its own world with its own inner logic. Kelly has called the film a comedy, but it’s never particularly funny; the plot, heavy with conspiracies and counter-conspiracies, is deliberately labyrinthine and teasing and finally irrelevant to the film’s sensual pleasures and so-bad-it’s-good style. This is a cartoon movie with a cartoon cast, all of whom, to their credit, act as if they know exactly what’s going on. If Southland Tales has an emblematic performer, it would have to be Sarah Michelle Gellar, who plays Krysta Now, a blond porn actress turned reality show hostess. Gellar finds just the right note of deadly absurdity; she could be playing Ionesco. Her Krysta has a luscious visual weightlessness (she’s all blond hair and toned, tan bod) and her cheerful, thoughtless endorsement of sex is fairly irresistible. Krysta Now defines Bad TV: diverting, addictive, soul-destroying.

What is Southland Tales about? It’s about Robert Aldrich’s Kiss Me Deadly and nuclear bombs. It’s about how Gellar’s hair turns brown for a climactic dance with Dwayne “The Rock” Johnson. It’s about Wallace Shawn squawking, “Preposterous!” in lieu of his trademark, “Inconceivable!” It’s about the creepy little lady from Poltergeist (Zelda Rubinstein) teamed up for earth-shaking experiments with that guy from Moonlighting (Curtis Armstrong). It’s about Miranda Richardson, the only card-carrying Thespian in the cast, presiding glacially over a vast Internet-filtering system. It’s about Justin Timberlake drunkenly lip-synching to the camera as Busby Berkeley-style female dancers mechanically offer themselves up to him (a ghastly parody of Timberlake’s recent HBO concert). It’s about munching on Cheetos all day. It’s about the seedy beauty of the Santa Monica Pier. And in the end, it’s about how even when the world is collapsing, rich people will still be swilling champagne at a swank party while others fight in the streets.

Southland Tales has its peculiarities. What, for example, are we supposed to make of the constant references to dick and sucking dick and fucking dick, etc., almost all of which is spewed by the women in the cast? (I guess if you’re going to make a movie as personal as this, you should probably send your id to the dry cleaners beforehand to wipe out unseemly, distracting stains.) There are long scenes with Cheri Oteri and Amy Poehler of Saturday Night Live that go nowhere, and Oteri has a rather large role that she inhabits uncomfortably. The hyper-ironic Saturday Night Live style of humor has no real place here: this is not a film that can accommodate a burlesque scene of Jon Lovitz propositioning Cheri Oteri. On the other hand, a scene where Nora Dunn and John Larroquette square off about terrorism in an outdoor café gathers a surprising amount of heat because these are the last two people on earth you’d expect to see making any kind of political point on any screen.

J. Hoberman has compared Southland Tales to David Lynch’s Mulholland Drive. It’s nowhere near as good as that masterpiece, mainly because it lacks heart and emotional specificity. However, as a cool condemnation of our culture of divisiveness, war and hypocrisy, it hits more than a few bulls-eyes, which cannot be said for the lame “Let’s talk about Iraq” movies that have piled up this year. Kelly’s smartest choices are musical: Moby’s smooth score instantly and nostalgically signals the prosperous relaxation of the late-nineties before our country started teetering on the brink of ever-lurking disaster. For the finale (aboard a zeppelin!) Kelly has Rebekah del Rio, the searing chanteuse of Mulholland Drive, sing a hopefully-charged version of “The Star-Spangled Banner” with a background of ominous strings. Her big, embracing voice encapsulates the slippery themes of Kelly’s film, just as Del Rio’s Spanish version of “Crying” transfigured Mulholland Drive.

This is a wild movie on a very large scale that’s bound to alienate a lot of people, even fans of Donnie Darko. The film forgoes intimacy and even character, but Southland Tales is alive with talent, nerve and penetrating intelligence; it moves like a locomotive and trusts its own instincts. Whether it will grow or shrink with time depends on where America goes in the next few years. Donnie Darko shyly exists in the shadow of the mighty Mulholland Drive, which burned a funeral pyre to old Hollywood and the idea of romance. Mulholland Drive summed up the past while Donnie Darko saw the future, and so it is the undeniably lesser Donnie Darko that defines the year 2001 (and 1988). Southland Tales is clearly the movie of the year 2007, for better and for worse. It nails the dodgy zeitgeist of the moment by yearning for the comfort of 80’s/90’s soft-soap music and television while anatomizing the hard conflicts of the present with ballsy, graceful intuitiveness. If Kelly’s generation is to make any difference in the world, this opposition between the overly secure coddling of our upbringing and the brutal reality of our smacked-around, cowed adulthood will have to be resolved as soon as possible.

Review: I for India