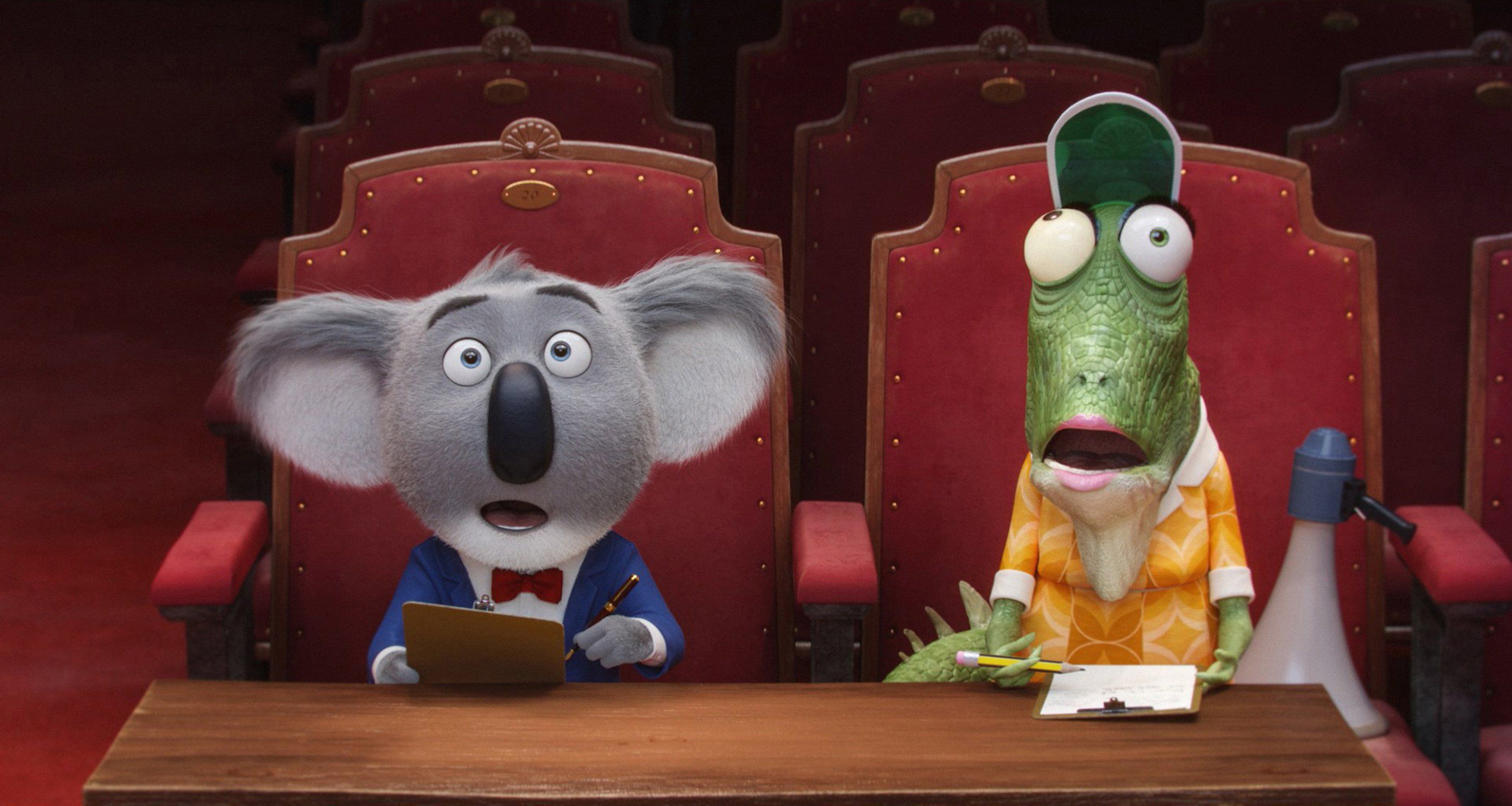 It’s a bad sign when a film as crammed with characters, plotlines, gags, and musical numbers as Sing leaves one thinking more about how much money in clearance rights had to be paid for all the songs on its soundtrack than about what those songs signify in the context of the film itself. But then, such is the nature of Garth Jennings’s animated production, which feels less like the work of an artist burning to put across a deeply personal vision than a slick commercial product designed to appeal to as wide an audience as possible. Sing has something for everybody: a soundtrack that features everything from pop songs to staples of the great American songbook; storylines that evoke domestic, romantic, and gangster melodramas; and an uplifting celebration of the ostensible ability of anyone to sing if they just love it enough.

Anyone, though, wanting for depth of characterization, wit, or visual splendor will have to look elsewhere. There’s nothing particularly inspired about the animation here; even some of the creatures in Illumination Entertainment’s last film, The Secret Life of Pets, had a few interesting designs to them. Other than an inventive visual gag in which a pig housewife, Rosita (voiced by Reese Witherspoon), comes up with a Rube Goldbergian contraption to help cook and serve breakfast for her 20-odd children and husband while she tries to make her dreams of singing stardom come true, much of the humor is memorable less for its cleverness than for the velocity of its delivery.

Perhaps it doesn’t matter that none of the participants of koala theater mogul Buster Moon’s (Matthew McConaughey) singing competition are given much dimension beyond the archetypal; with so many characters featured, trying to develop them all might have made Sing feel more cumbersome than it already does. But not even Buster Moon himself is developed in a way that would make his mission to keep his late father’s run-down theater palace alive through this singing contest matter to us as much as it does to him. In fact, though Buster Moon reminisces about his love of theater in an opening flashback montage, the film itself barely evinces any passion for the theater.

Compare Sing with another animated film about an ordinary creature transcending his circumstances and fulfilling his artistic ambitions: Ratatouille. In Pixar’s 2007 film, writer-director Brad Bird allowed audiences to comprehend what exactly about cooking appealed to young Remy the rat: the euphoria he feels when he first discovered the pleasures of combining two different foods together, the process of coming up with and executing recipes on the spot, the joy he experiences when diners express satisfaction at the resulting meals. Unlike Remy, Buster Moon in Sing never once reckons with musical or theater history or grapples with what it is about the stage that appeals to him so much. Musical theater here is simply an excuse for Jennings to deliver an animated version of American Idol.

But then, that’s apt for a film that, like the singing contest at its center, seems driven less by celebrating the ability of ordinary people to realize their artistic potential than by profiting off said potential. Sing appears to buy into the capitalist imperative of the singing-contest TV genre, cannibalizing preexisting music in order to promote super-stardom rather than personal expression as the highest goal. Though, like those reality competitions, Jennings and company cannily try to sell this package as a multi-stranded narrative of personal liberation, the poverty of imagination in the film’s shallow characterizations and clichéd storylines suggest that the only thing the filmmakers sincerely believe is in the almighty dollar as a measure of success.

Review: The Autopsy of Jane Doe