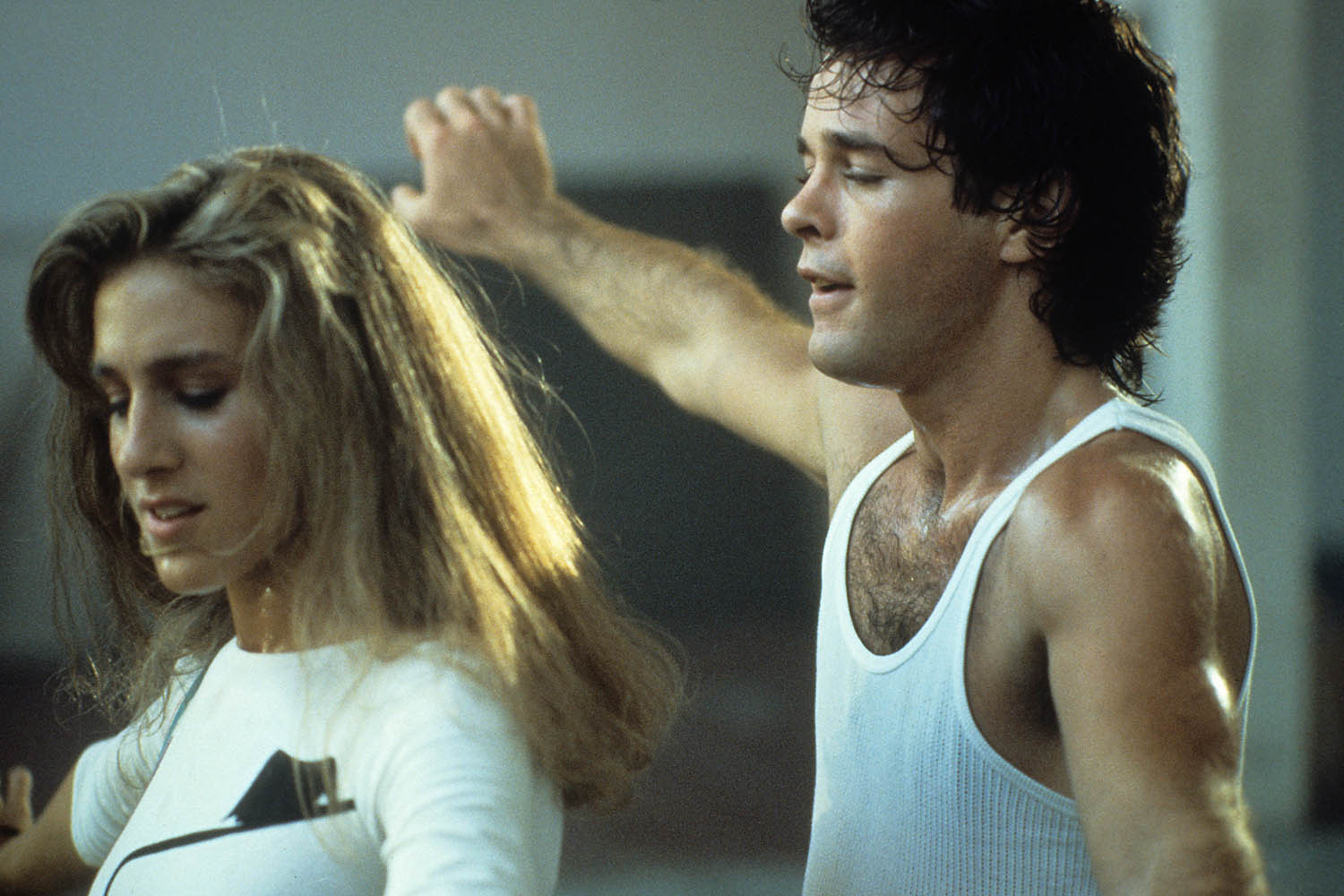 Full disclosure: I am absolutely biased when it comes to Girls Just Want to Have Fun, the sweatband-and-synthesizer chick flick that pulls its name from Cyndi Lauper’s breakout hit. This is the movie I used to rent incessantly and watch on elementary-school sick days, back when, ya know, no one suspected a thing about this sports-snubbing color coordinator. So excuse me if I have a certain fondness for Janey Glenn (Sarah Jessica Parker), whose enthusiasm is almost as huge as her barely-straightened hair, and Lynne Stone (Helen Hunt), who made the Catholic School uniform naughty way before Britney Spears. But even from an objective viewpoint, Girls Just Want to Have Fun isn’t really a bad film, at least not in the ways in which we tend to define bad films. The acting is more than competent, there’s not much glaringly bad dialogue, the humor is inventive, and the song-and-dance is engaging. The direction (by Back to School helmer Alan Metter) is smooth enough, and there’s essentially nothing morally reprehensible to sneer at. It’s consummately tacky, for sure, but as a high school fantasy about a young girl chasing a dream, it’s got a leg up on a whole lot of like-minded films. The reason it’s such an easy target for ridicule is it may be one of history’s most instantly dated movies. Consider what Lynne says when she first meets Janey on the bus, and turns her schoolgirl skirt inside-out to reveal a leather interior: “Velcro! Next to the Walkman and Tab it’s the greatest invention of the 20th century.”

Girls Just Want to Have Fun is a time-capsule film, and its key attributes range from the reactionary to the prescient. With its Chicago-based Dance TV serving as Janey’s holy grail (one she hopes to reach via a contest scouting new show regulars), the 1985 movie is a blatant response to the MTV phenomenon, which, at four years old, was still in its booming infancy. The film is also an unabashed amalgamation of 1983’s Flashdance, right down to the off-the-shoulder gray sweatshirt Janey wears when rehearsing, and 1984’s Footloose, which features a similarly militaristic father figure condemning twinkle-toed extracurriculars (and, perhaps not-so-incidentally, also stars Parker). And yet, for all the things that could prompt someone to label the film derivative, there’s also plenty of content that strongly mirrors what, today, is part and parcel of millions of viewers’ weekly TV consumption. Gary Woods, the British Dance TV host played by actual radio and TV personality Richard Blade, is a dead-on mashup of Ryan Seacrest and Simon Cowell—a chirpy emcee with flecks of that unmistakable English bite. And the show itself, which, pre-contest, has Janey and Lynne gushing over their “favorite dance couples,” naturally resembles Dancing with the Stars, albeit with more neon and fewer lame Top-40 cover songs.

As Girls Just Want to Have Fun soldiers on, introducing Janey’s hunky assigned dance partner, Jeff (Lee Montgomery), and his hyper, pop-culture obsessed sister, Maggie (a sweet, pre-bitch Shannen Doherty), Metter really cuts loose and tosses the reins to the wind, particularly during an initial, outdoor audition sequence. Featuring blink-and-miss cameos from then-unknowns like Gina Gershon and Scott Coffey, the segment sees Lynne rocking a nutso leotard and a hat with a rubber grasshopper on it; catches Jeff leaping through a paper partition in preposterous slow-mo; and watches as zealous hopefuls give Janey a firsthand lesson in sensual moves, some of them thrusting their partners with vigor, and others convulsing on the floor like Billy Idol with epilepsy. The movie actually has quite a few transgressive sexual references, which, depending on how you look at them, were either risqué for their time or fell into a trend less filtered than what’s seen in the mainstream today. Wealthy suber-snob Natalie (Holly Gagnier), the story’s villainess who also wants that coveted Dance TV spot, walks around sucking on popsicles and taunting Jeff with offers to “practice moves,” while virginal Janey, when first hopping on Jeff’s motorcycle and asking if it’s safe, is met with the blunt response: “It’s the safest thing you’ll ever have between your legs!”

Moreover, Girls Just Want to Have Fun is surprisingly inclusive in its overall depiction of sexuality and sexual politics. Ira (Terry McGovern), the impresario leading that mad audition, is very clearly gay, and however rosily optimistic the scenario may seem, Jeff’s father (Biff Yeager), a benevolent man’s man recalling Kurt Hummel’s dad (Mike O’Malley) on Glee, is refreshingly supportive of his son’s ambitions to be a professional dancer, never once encouraging him to chase more “masculine” pursuits. Best of all, the film’s vast cast of cameo players, who, from clothing to hairstyles, basically look like they’re wearing the 1980s, are generously populated with girly men and manly women, who toy with their gender as much as they do their velcro and their Walkmen. Never is this more apparent than in the movie’s standout sequence, which sees Janey, Lynne, and Maggie orchestrate an epic crashing of Natalie’s snooty debutante ball. Hustling through that most important of ‘80s hotspots—The Mall—the trio make photocopies of Natalie’s invitations (a plot point that would itself be xeroxed in 10 Things I Hate About You), distributing them to every freak and geek in town, and then watching them descend on the stuffy affair like a living hailstorm of debauchery. Janey and Jeff’s eventual, climactic victory is one for the dance-off archives, but this centerpiece scene takes—or rather, obliterates—the cake. Scored to Holland’s scream-rock anthem “Wake Up the Neighborhood” (one of many unforgettable tunes on the soundtrack), it features the manly gals knocking down doors and trashing furniture, the girly guys and their mohawked compatriots overtaking the house band, and, most indelibly, a crazed guitarist traipsing across a table and shoving his foot into a cooked turkey, all in a triple-take that’s in sync with the blaring music. Now that is some great trash, folks.