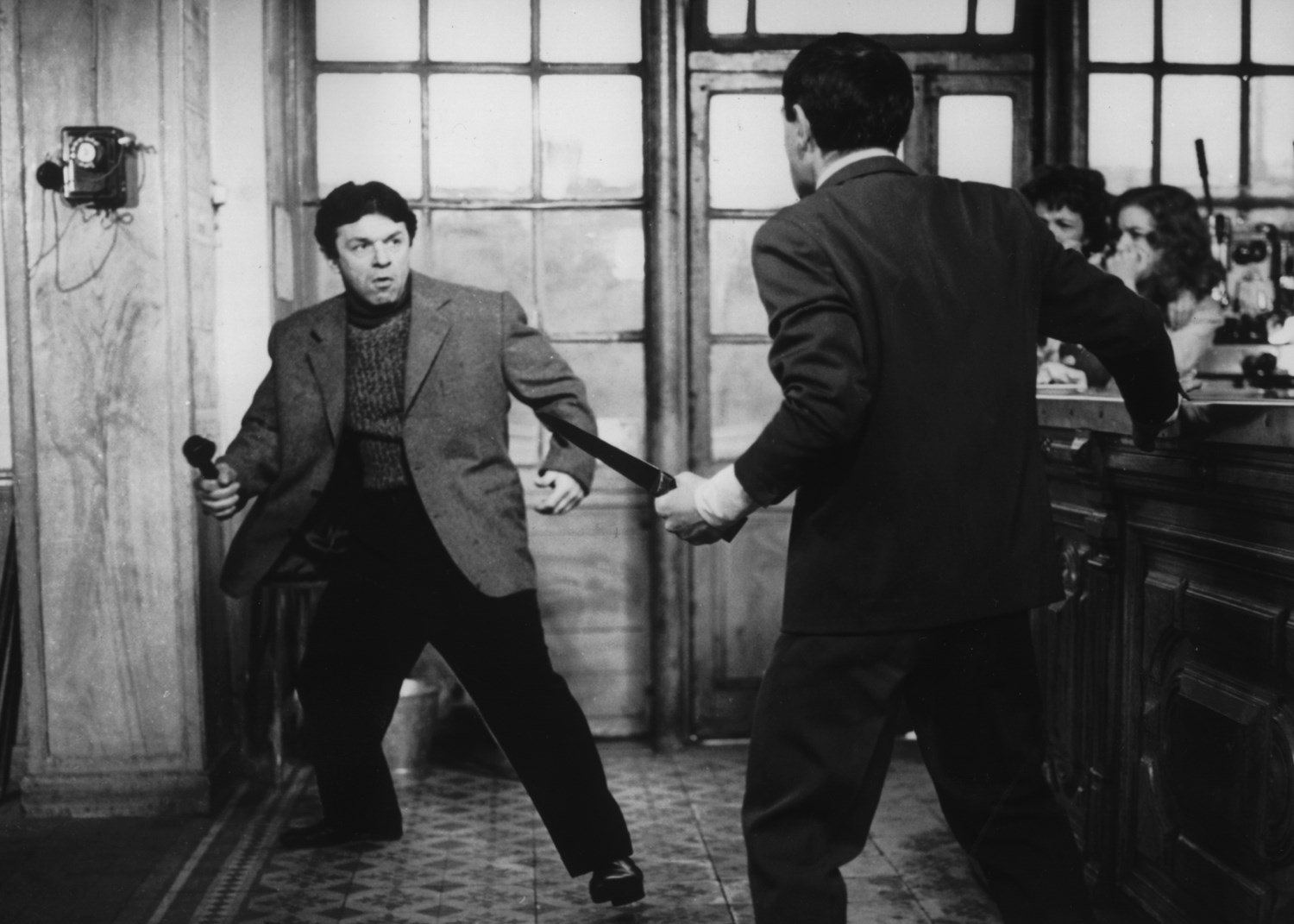 I certainly don’t have enough hubris to offer up a “review” of Shoot the Piano Player; out of all the rep options open to NYC residents this week, it’s the easiest to attend and one of the most essential. Anyone with more than an exceedingly casual interest in film who hasn’t seen it should check it out; with a spangly new print and subtitles that do their (sometimes endearingly awkward) best to keep up with a dense selection of slangy song lyrics and Gallicized translations of already archaic American slang, it’s pretty much an optimal viewing experience. So take the endorsement as read. Some notes:

1. This is the fifth Truffaut I’ve seen; I frequently get the feeling he’s out of favor these days (certainly it’s hard to imagine Rialto making as much bank off a series of Truffaut re-issues as off the ever-fashionable Godard selections that seem to do marvels for them). Part of this, I suppose, is his reputation as a “literary” director; without faith in its sheer drive, it can be hard to take Two English Girls at face value as great cinema. Yet Shoot the Piano Player (like, to a much greater extent, Day for Night) seems like a great test-drive for where Robert Altman would be going in a decade. 81 minutes is short enough for a film without taking 10 minutes to even introduce a plot, which is exactly what happens. That opening reel—an abortive car-chasing-man bit mutating into a genial conversation with a stranger before revealing that our ostensible protagonist is actually a sibling to the antihero—sets the tone for what’s to come: come for the fringe benefits, stay for the plot (maybe).

2. My problems with Truffaut (steadily dissipating, for the record) stem mainly from Jules and Jim, which I find too cute by half and too punch-drunk on the whole idea of “the possibilities of cinema” to actually add up to much. Yet I’ve always been shocked by how the end of Jules and Jim, at least momentarily, arouses some weird wellspring of emotion in me; to some extent, this is what happens at the end of every Truffaut film I’ve seen, where exuberance suddenly translates into deeply-felt melancholy without me being able to tell how exactly this came about. This happens at the end of Shoot the Piano Player as well—the noir plot, basically discarded in favor of the ever-present momentary satisfaction, suddenly assumes its conventional poignancy at the last moment. I have no idea how this comes about, and it’s Truffaut’s greatest gift based on what I’ve seen.

3. “I’ve always thought women are magic,” notes one hood—yet another irrelevant aside in a sequence that should ostensibly be full of tension. The phrase is one that resonates throughout Truffaut’s canon—“Are women magic?,” Jean-Pierre Léaud wonders in Day for Night—but I’m fairly convinced that, unlike Godard’s unresolved hate/love issues with misogyny, Truffaut always understood that he was fundamentally irrational. Not only is the hood being fantastical, he turns off the woman he’s talking to. Sexual neurosis is a major component here, and hang-ups like the “magical woman” seem to hold everyone back.

4. Speaking of … Shoot the Piano Player is (probably unintentionally) Truffaut’s gloss on the same genre as Breathless (for which he worked on the story). Per J. Hoberman, the difference between the two films may well be “the difference between talent and genius.” But Shoot the Piano Player has the seeds of Truffaut’s best traits—a willingness to simulate the illusion of loss of control, female characters that are nobody’s mystery muse (no matter how much they appear so to the hapless males who love them), formal dexterity, working with children who aren’t cloying. Breathless has the seeds of every cranky autodidactic trait that would increasingly drive Godard’s work away from everyone except the completely devoted.