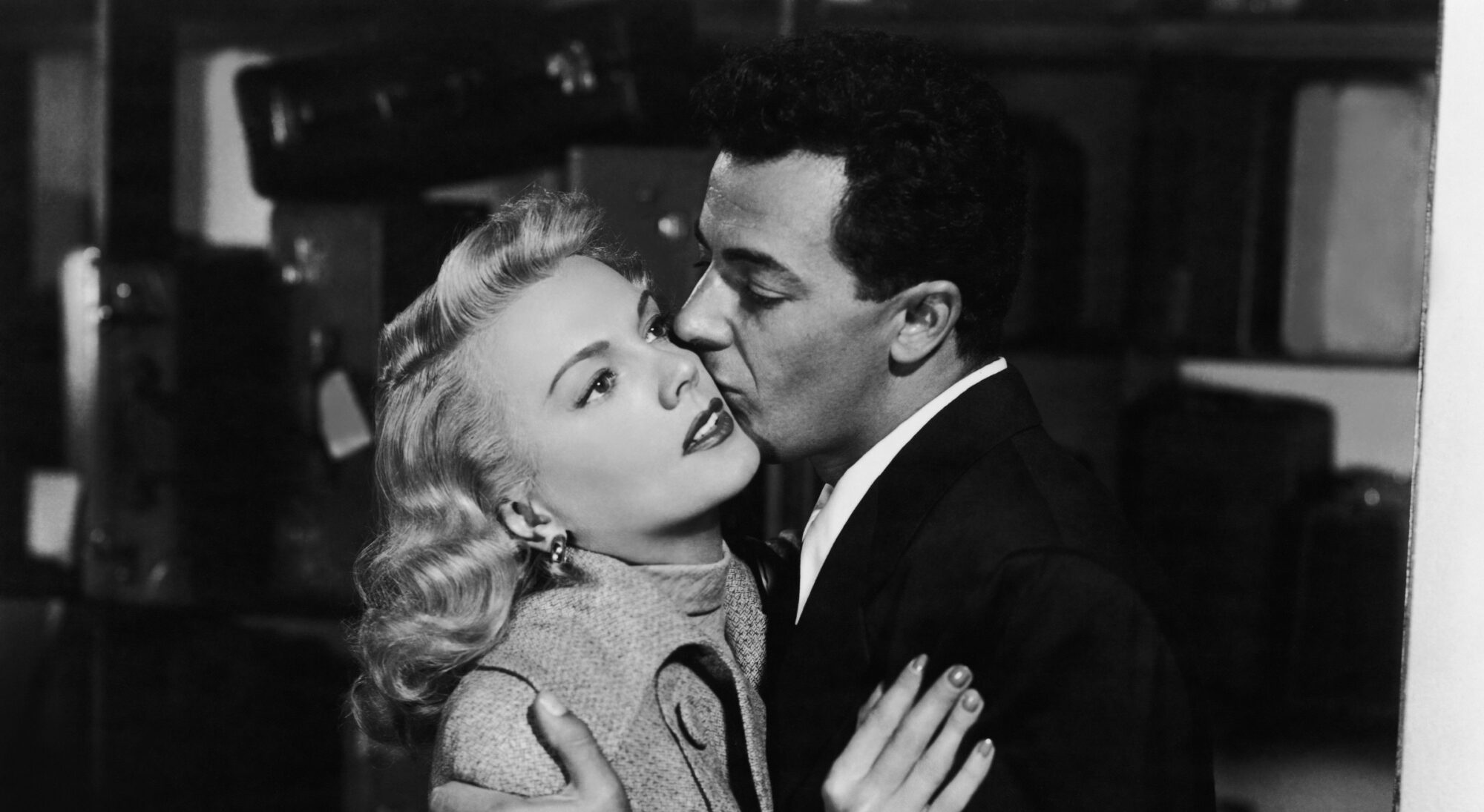 Douglas Sirk was understandably saddened by his 1949 melo-noir Shockproof, which, in association with the online discussion group a_film_by, is being resurrected for one week at the Pioneer Theater beginning January 24. Sirk was enamored by the original screenplay by Samuel Fuller (he called it “gutty”), only to be later reworked—and lobotomized—by Helen Deutsch of National Velvet and Lili fame. On paper, the film promises an exciting clash of sensibilities from two of the finest titans from the auteurist underground—the grime of The Naked Kiss swiped across the surface of Imitation of Life‘s fine china. On screen, this conflict is richly apparent, but Sirk’s direction is disenchanted at times, and the script, a labyrinthine tale of emotional manipulation, feels tamed of its archness.

In the opening shot, no less than three pairs of white heels saunter past a piece of Hollywood Boulevard sidewalk. Since it isn’t Labor Day (a calendar later in the film tells us as much), this parade of white isn’t meant to offend high society. It does, though, suggest a feeling of false purity. Jenny Marsh (Patricia Knight) steps into a boutique, bottle-blonding her hair before meeting with her parole officer, Griff Marat (Knight’s then-husband Cornel Wilde). This obedient officer of the law will move her into an apartment and get her a job, but try as he does to steer her away from the suave Harry Wesson (John Baragrey), Jenny and her old boyfriend reunite—always in secret, not only away from Griff’s prying eyes but also from his mother’s blind ones.

The original title of the film was The Lovers, but Shellshock is a better, more subversive précis of the story’s psychology. Griff, who lives at home with his mother and his very queer little brother, is at once smart and daft—and if this were Hitchcock, he might have been psycho. Unconsciously trying to seduce Jenny, who should be just another parolee under his watch, he pays her $100 a month to take care of Mrs. Marat (Esterh Minciotti). Sirk’s trademark visual flair is most obvious throughout these scenes, when his camera adopts Jenny’s sense of arrested terror, if not for the mirrors and wallpaper in the house then for that stairway to the second floor, which promises with every difficult step a pained but ultimately happy trip toward recovery.

When Griff reaches for her hand in a theater, after his little brother has innocently done the same, Jenny regards him with something close to revulsion, though it’s never clear if she is appalled by the man or his technique. Rich in double meanings, the film keeps its audience as confused as its characters, but Knight’s eyes are revealing. After contriving a way for Jenny to break her parole by secretly marrying Griff, Harry expects her subordination to him, but will she accept her former beau’s offer of riches or Griff’s more meager promise of happy domesticity? Swaying back and forth, never making known which way characters will bend and ultimately break, we must look to Knight’s tears in one scene to see where the truth lies. Eyes—what they can reveal to us about our natures—have perhaps never mattered so much to a film outside of a Dario Argento giallo.

Given its poetic nuances, it’s a shame the film succumbs to cliché. When Jenny shoots Harry, she and Griff take to the road, where their love for each other and Griff’s relationship to authority never feels tested. Sirk recognizes a haunting visual splendor to the miserly abode his tarnished angels will call home, recalling a bittersweet pose or two from Frank Borzage’s brilliant Seventh Heaven, but Shockproof will betray its title, hawking a form of deliverance at a price and laziness that’s too embarrassing to discuss. Don’t blame Fuller or Sirk, though, because if they had had their way, Griff might have turned against the system, destined for the morgue or a shock corridor somewhere. Instead, he’s a square who stays square—ultimately as obedient to convention as the film is to genre.

The Two Jacobs: Two Wrenching Departures and The GoodTimesKid