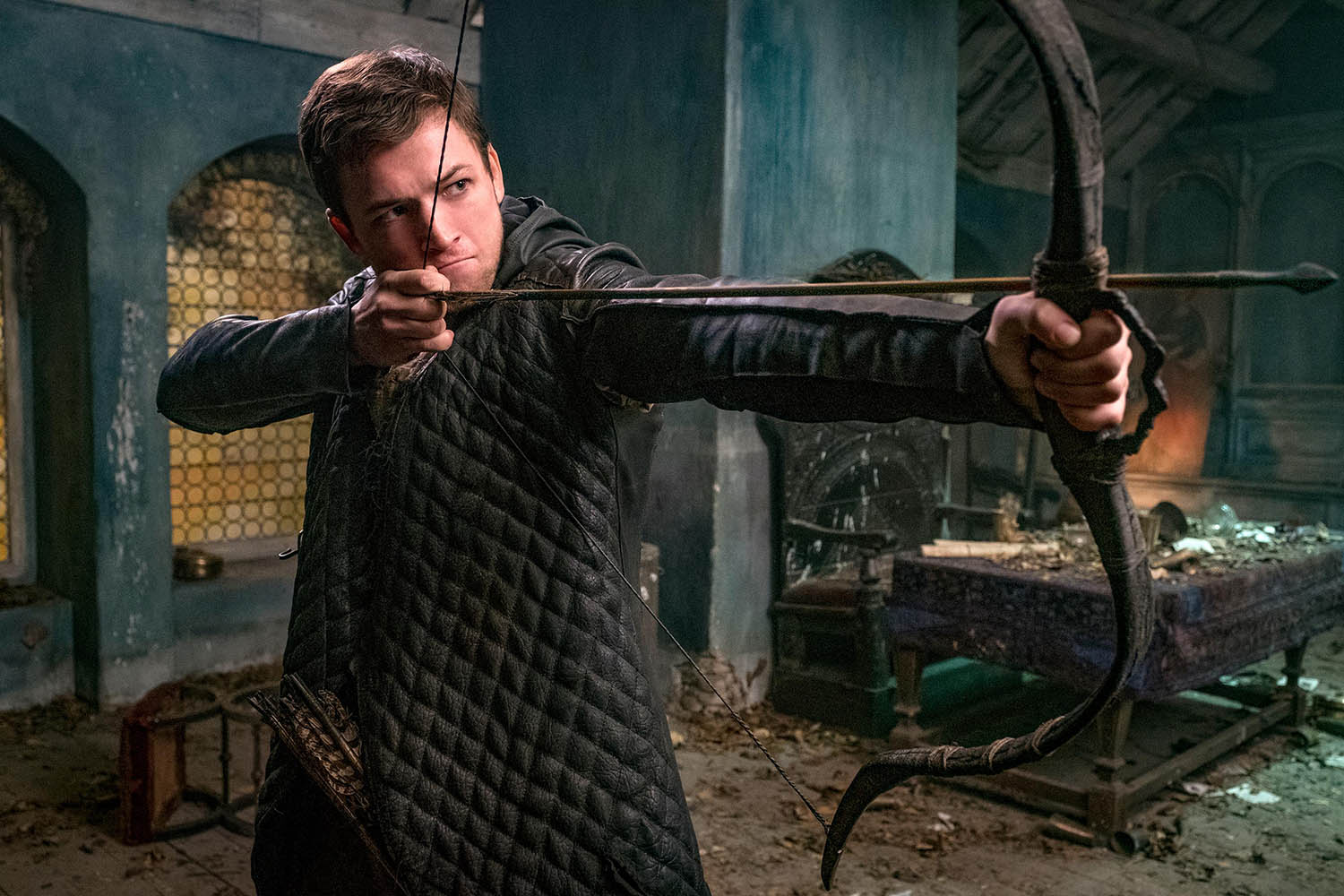 “Forget history,” Friar Tuck (Tim Minchin) urges us during the opening narration of Otto Bathurst’s Robin Hood, and one would be wise to heed that advice. While technically set in something vaguely resembling medieval England, the film attempts to update the legend of Robin Hood for contemporary audiences in hilariously bald-faced fashion. Bathurst has recast the roguish folk hero as an urban revolutionary, a street warrior in a black hoodie and bandana facemask who ultimately leads an army of angry, young Molotov cocktail-toting rebels against the rich and powerful of Nottingham.

Which is to say that this film’s Robin of Locksley (Taron Egerton) is essentially a modern-day conservative’s worst nightmare. Though born into a wealthy family, he’s radicalized by his stint in the military fighting a bloody imperialist crusade in the Middle East. Upon his return to England, he’s trained in the art of thievery and street warfare by a black Muslim immigrant (Jamie Foxx, grinning, grimacing, and savoring his exaggerated African accent). Robin is a class traitor, stealing from the rich, giving to the poor, and rallying Nottingham’s underclass with explicit calls for socialism—“Who’s up for a little redistribution of wealth!”—and much to the chagrin of the town’s power-hungry sheriff (a scenery-devouring Ben Mendelsohn).

Robin Hood is an unapologetic B movie. The acting is hammy, the CGI is chintzy, and some of the city sets look like they were left over from Paul W.S. Anderson’s Pompeii. There’s something oddly charming about the film’s embrace of its tackiness, particularly the way it mashes up the modern and the medieval with un-self-conscious glee. This is evident in the over-the-top battle sequences, during which British soldiers, decked out in what looks like modern-day body armor and desert camo, battle Arabs who fire jacked-up, shoulder-mounted crossbows that rattle off arrows with the force and frequency of a machine gun. Then there’s the hilariously gaudy masquerade ball, which looks more like an outtake from Baz Luhrman’s The Great Gatsby than anything one would expect to find in a Robin Hood film.

Unfortunately, the film’s shameless silliness only takes it so far, as Robin Hood is frequently undermined by Bathurst’s wobbly direction. The fight scenes are mostly a hash of bad framing, ugly effects, and indistinct thrashing, and when in doubt, Bathurst simply throws in some random pyrotechnics to juice up the action, resulting in seemingly countless shots of horses galloping through the streets of Nottingham as inexplicable explosions fire off around them. It doesn’t help matters that Bathurst adopts such a dimly lit, chronically muddy visual palette, which spoils our enjoyment of the occasionally interesting costume design, interiors, and shot compositions.

But if Robin Hood’s visuals are murky, its political orientation is surprisingly cleareyed. The film puts a distinctly progressive spin on a legend which has always been inherently egalitarian in spirit, and Bathurst actually broadens its scope beyond the archetypal heroic white guy. Here, Robin isn’t simply born into greatness; rather, he’s made great by the black man who trains him and the woman, Marian (Eve Hewson), who urges him to fight for equality. While no one is going to confuse this cheesy little action flick for The Battle of Algiers, its unambiguous endorsement of left-wing revolution—however broadly defined—is notable as a sign of our politically polarized times. These days, even a centuries-old folk hero has to decide: Which side are you on?