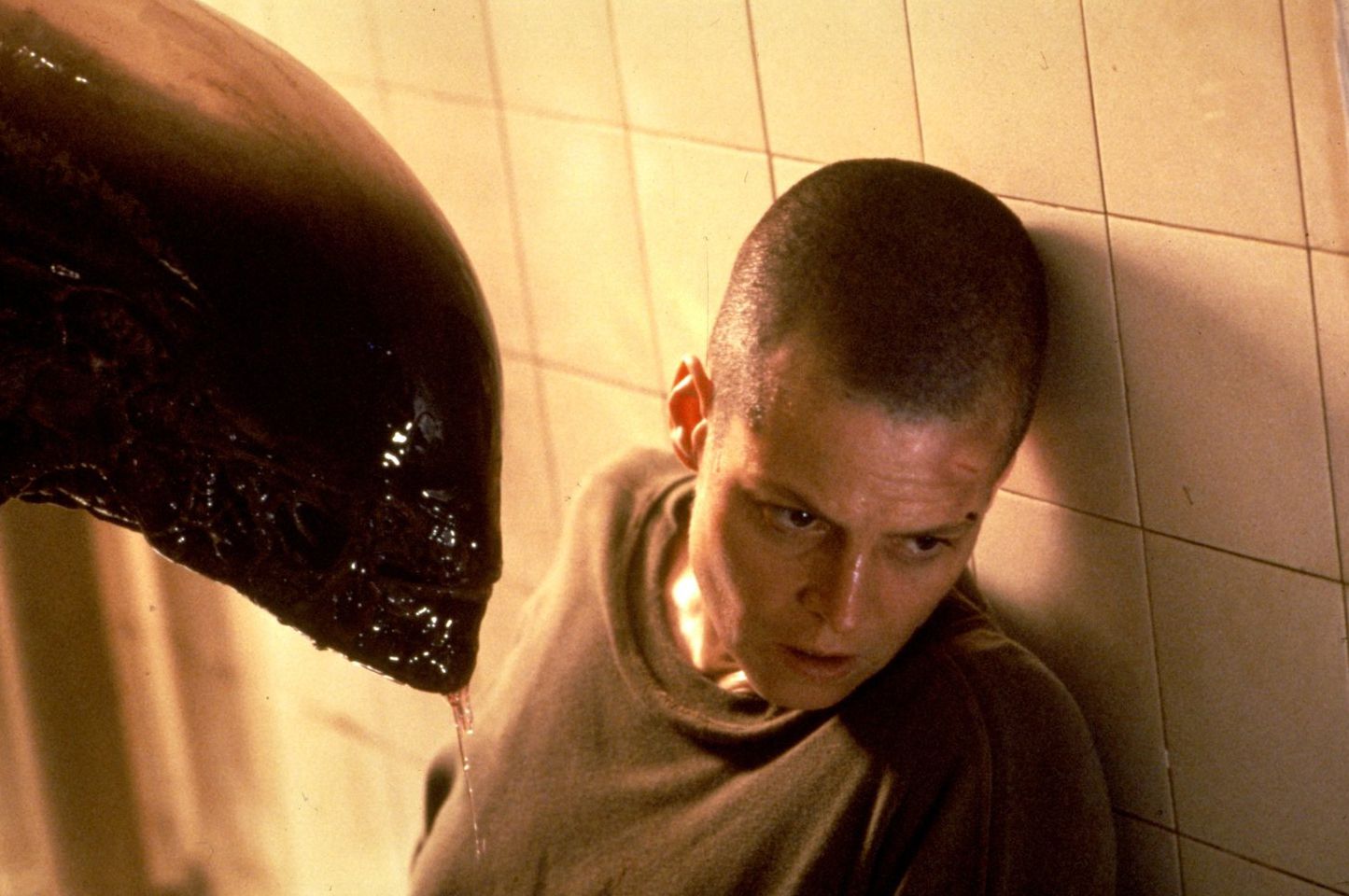 David Fincher’s Alien³ may be the only film ever made to peak with its logo. As the 20th Century Fox fanfare crescendos over the studio’s familiar logo, the music holds on the minor chord before the usual last note, replacing jubilant bombast with a dissonant groan of strings. The alteration produces an immediate sense of discomfort and unease, setting the tone for something ominous and fearsome. It’s an ingenious shot across the bow from Fincher, ushering in a feature career dotted with immaculately ordered, carefully scored works of blockbuster entertainment that veered from audience-pleasing major keys to their grim underbellies.

The perversion of the Fox theme epitomizes a succinct grasp of horror that only occasionally surfaces in the film proper. Too often, Alien³ shows its seams, whether in its thematic arc or the design of the xenomorph, and at not even two hours it still feels weighed down by unnecessary exposition and padded suspense scenes. But blame for much of this cannot fall at one person’s feet, as the film was notoriously the product of years of production hell that saw the studio soliciting wildly different drafts from writers including (but not limited to) cyberpunk author William Gibson, writer-director Vincent Ward, and producer/filmmaker Walter Hill. Eventually, ideas from each version found their way into a Frankenstein monster of a shooting script, one further plagued by endless on-set rewrites that left Fincher so exasperated that even Fox’s officially released behind-the-scenes footage shows the director railing against the pressures of the studio’s poorly planned project.

Sift through the film’s disjointed, episodic structure, however, and there’s much to admire. Considerable criticism, from both audiences and former cast and crew members on the series, was directed at the decision to callously kill off Lt. Hicks (Michael Biehn) and Newt (Carrie Henn) in the opening credits. Regarded on its own terms, though, their deaths fit well within the series’s bleak tone. Structured in staccato clips inserted between the credits, the scene shows off the sense of visual economy that Fincher picked up while making music videos. It plays out in ominous glimpses of a hatched alien egg, a facehugger stretching toward Newt’s cryogenic pod, a crack of glass, and seepage of blood into cloth. In seconds, all of the good feelings left over from the end of Aliens are brutally cast aside, robbing Ellen Ripley (Sigourney Weaver) of the ad hoc family she’d only just rallied together.

It’s a promisingly nihilistic beginning, and Ripley’s dismay upon learning of her friends’ deaths is compounded by the revelation that she’s crash-landed near a Weyland-Yutani prison, a refinery work camp whose inmates are all men with double-Y chromosomes, a defect that enhances their aggression and leaves them more likely to rape and murder. The early scenes, of Ripley interacting with men actively afraid of her presence and what it might encourage in them, mark the film’s thematic high point, balancing Ripley’s fears of a possible xenomorph outbreak against the equally immediate worries about the rippling aftershocks of her presence on the inmates’ vows of celibacy, made in a mass religious conversion among the prisoners that occurred long before she arrived. Frequently, the men use their religion as pretense for distrust of the woman, if not outright abuse. Ripley has always had to deal with unfriendly elements, but they usually came isolated in the form of company men (or androids); here is an entire facility’s worth of people with an innate antagonism against her, one that stymies her attempts to lead them against the alien threat that breaks out shortly after her arrival.

Ripley’s interactions with the inmates provide yet another showcase for Weaver’s constantly evolving depiction of Ripley. If Ridley Scott’s original Alien presented Ripley as a competent professional and the second as a fiercely protective surrogate mother, Alien³ depicts her with nearly all of the humanity burned out of her from her experiences with the inhuman. Head shaved to avoid the prison’s lice epidemic, the character looks imposing as she walks among the men without fear, even itching for a fight as she goads and teases those who bristle and shrink from her presence.

Before she can even process Newt’s death, Ripley demands an autopsy on the child and observes the grisly act to personally look for signs of xenomorph. And no sooner is Hicks given an ad hoc cremation in a giant ore furnace than Ripley shacks up with the prison’s medical officer, a fellow inmate named Clemens (Charles Dance), just to feel something. Often depicted up to this point in the Alien series as a quintessential badass, Ripley here embodies the unsettling, tragic endpoint of not caring. Even when she desperately fights off an attempted gang rape, there’s a distanced, savage look in the woman’s eyes, a primal ferocity that perpetuates the franchise’s slow equation of Ripley’s own survival drive with those of the xenomorphs she faces.

In what’s become something of a recurring theme of the franchise since its first two entries, Alien³ arguably peaks before the alien itself takes center stage. The looming, Brutalist-style prison setting evinces a sense of decay well before the camera explores its dripping, darkened corridors and vents. The private-owned prison, more work camp than carceral institution, has a wide-open feel that paradoxically enhances the feeling of being trapped, a testament to the assurances of its builders that those who worked there would know they had nowhere, ultimately, to run. When the alien finally does begin to roam the prison, however, the environment too quickly loses its character, its labyrinthine structure and dangerous areas (a ventilation shaft with a giant fan telegraphs a gruesome human purée well before it happens) betray their usefulness to the story. No longer does the facility have its own story to tell; instead, it looks as if it were built around the alien sequences.

The alien itself is a disappointment, as the filmmakers’ intriguing idea of having a xenomorph infect and thus absorb the DNA of a quadrupedal animal is squandered on a garish puppet creation that moves in jerky, dissonant steps that completely divorce the creature from the environment. This robs the alien of even a hint of menace, barring a few close-ups that keep the image limited to the xenomorph’s face and teeth. Prefiguring an issue that’s plagued all future Alien movies in the CGI era, the depiction of the xenomorph so casually in full view saps much of the suspense that the first two films wrung out of keeping the monsters hidden or partially glimpsed. Once its definitions are set, the creature loses its amorphous, undefinable shape and size, limiting it to something comprehensible.

The lackluster alien undeniably drags down the proceedings, but the film maintains a consistently bleak atmosphere that elevates it above its sloppy sequel and the more self-conscious philosophy of recent prequels by staying truest to the simple hopelessness of the original film. Even within arguably the most nihilistic franchise in cinematic history, Alien³ stands out for its consistent tone of despair. It presents a reality where even machines feel fear and agony, as when Ripley reactivates the heavily damaged Bishop droid (Lance Henriksen), its tattered face struggling to focus a sagging, milky eye as it relays Weyland-Yutani’s continued, destructive interest in capturing and weaponizing the xenomorph. Having warned Ripley, he then asks her to be shut off, saying he feels pain in his current form and fears being rebuilt into something less special and perfect than what he was.

Ripley’s death drive, always present but overwhelmed when she discovers an alien embryo inside of her, is so intense that it blunts the confrontational behavior of the men around her, even Dillon (Charles S. Dutton), the prison’s religious leader whose initial hostility toward Ripley fades when he recognizes the purity of her martyrdom. The deflating alien antics of the film’s back half sap some of the power from Ripley’s ultimate sacrifice, but her final act, taking pro-choice symbolism to self-immolating extremes, is one of the most powerful images in the entire Alien franchise.

For all its inherent structural problems, Alien³ remains a worthy intended conclusion to the series, finding its true resolution in Ripley’s resolve to break the endless cycle of her torment. Initially panned upon release, Fincher’s film now has its supporters thanks in part to a 2003 recut that restored footage that’s even more evocative of the filmmaker’s overriding sense of dejected gloom. Yet its most lasting impact may be what it said about the direction that blockbusters would go, perpetuating the franchise’s close bonds to the state of tent-pole releases to their respective eras.

Alien enjoyed New Hollywood freedoms in its use of avant-garde production design and its deliberate, character-driven storytelling while its first sequel operated along the faster, more upbeat and cathartic tone of the mid-1980s. This film, the product of a hastily reconciliation of incomplete ideas, points to a future in which blockbusters would be crafted as if on an assembly line, no longer the product of one vision or even that of a group but of a conglomeration running on autopilot. As producer Jon Landau later said of the film, “We set out to make a release date, not a movie.” It’s hard to read that statement and not think of Disney and Marvel and announcing its theatrical lineups nearly a decade in advance.