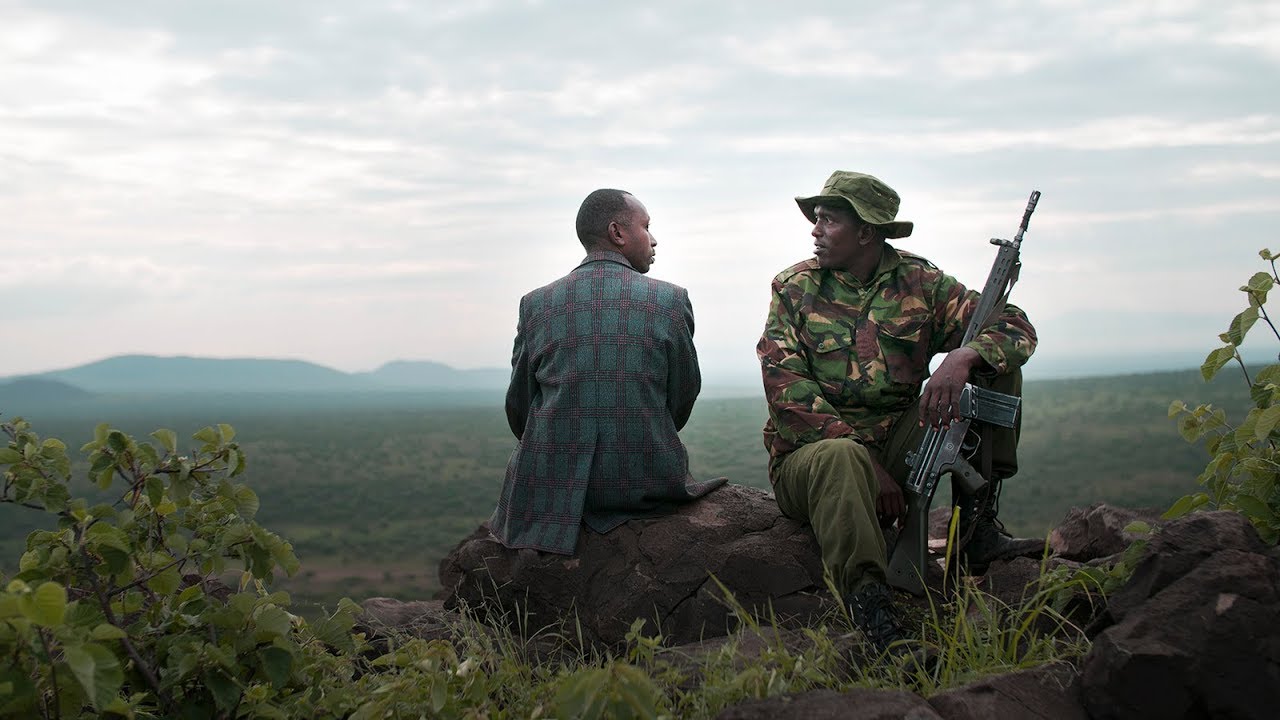 Jon Kasbe’s When Lambs Become Lions would seem old hat if it were a work of fiction, an overwrought gangster melodrama whose heightened conflict between one’s duty to family and to the law (both moral and state) have been played out repeatedly since cinema’s early days. The documentary’s subjects are two cousins, identified only as X and Asan, on opposite sides of the struggle between poachers and forest rangers in Kenya. While X, the illegal ivory dealer, faces increasing pressure as the Kenyan government cracks down on elephant poaching, Asan is being forced into an ethical corner as the same government’s missed payments endanger his ability to provide for his son and pregnant wife. Circumstances force the two cousins back into contact, and the line between poachers and the rangers tasked with shooting them on site—in effect, the division between wise guys and cops—becomes murky. Think Michael Mann’s Heat but in East Africa and with real-world stakes.

But it’s not just the story, as Kasbe, along with his co-editors Frederick Shanahan and Caitlyn Green, formally and structurally pattern long stretches of their fly-on-the-wall doc after a fictional film. They construct dramatic space out of observed material via techniques like forced eyeline matches and cut-ins, and weave their subjects’ stories into arcs that play out with a minimum of direct commentary. When a government representative informs Asan’s squad of gamekeepers that he cannot promise when their long-delayed paychecks will be arriving, the consequences play out in the escalating tension between Asan and his wife, rather than being directly exposited by Asan’s occasional direct addresses to the camera.

Likewise, X and his poaching partner, Lukas, have a problem with an unidentified buyer whose ivory delivery they must keep delaying, an arc of rising tension created by a bit of dramatic structuring. The camera follows the pair on multiple failed excursions to kill an elephant and make off with its tusks, tying these unsuccessful ventures into the brush directly to the increasingly frustrated phone calls X has with his buyer. X, who’s known locally as a dealer but has never been caught in the act of poaching, relies on the skilled Lukas to do the actual hunting. Introduced by the filmmakers crafting a potent poison and bullseyeing cactuses with a homemade bow and arrow, the markedly gaunt Lukas cuts a fearsome figure—the perfect callous killer to complement X’s showier gangster persona.

Adopting the stylistic trappings of fiction film creates something like a short circuit for our attention, and it’s easy to feel engrossed within the conflicts and uncertainties faced by the three principal characters. At times in When Lambs Become Lions, however, this hewing to narrative style is too obvious a construct, and one might question whether Kasbe is limiting his documentary by so cleverly making it resemble a kind of gangster thriller.

To his credit, though, Kasbe doesn’t fully neglect the broader context that a more traditional documentary would be sure to establish, as he draws the contours of the fight against poaching using motivation from within the localized world in which his film is set. Namely, X watches a TV broadcast of Kenya’s President Uhuru Kenyatta affirming his commitment to ending poaching, and making a show of burning hundreds of tusks confiscated from poachers worth a reported $150 million. Here the film finds its most powerful metaphorical image, as the sight of the immolation of so much ivory, representing untold numbers of endangered animals, hardly seems like a moment of triumph. It would seem that what Kenyatta calls Kenya’s “natural heritage” is going up in flames no matter who wins in the internecine struggle between government forces and the outlaw hunters they often break bread with.

Review: I See You Is a Twisty, Atmospheric Look at the Ties that Bind

Review: Little Joe Draws Its Power from the War Between Intellect and Emotion