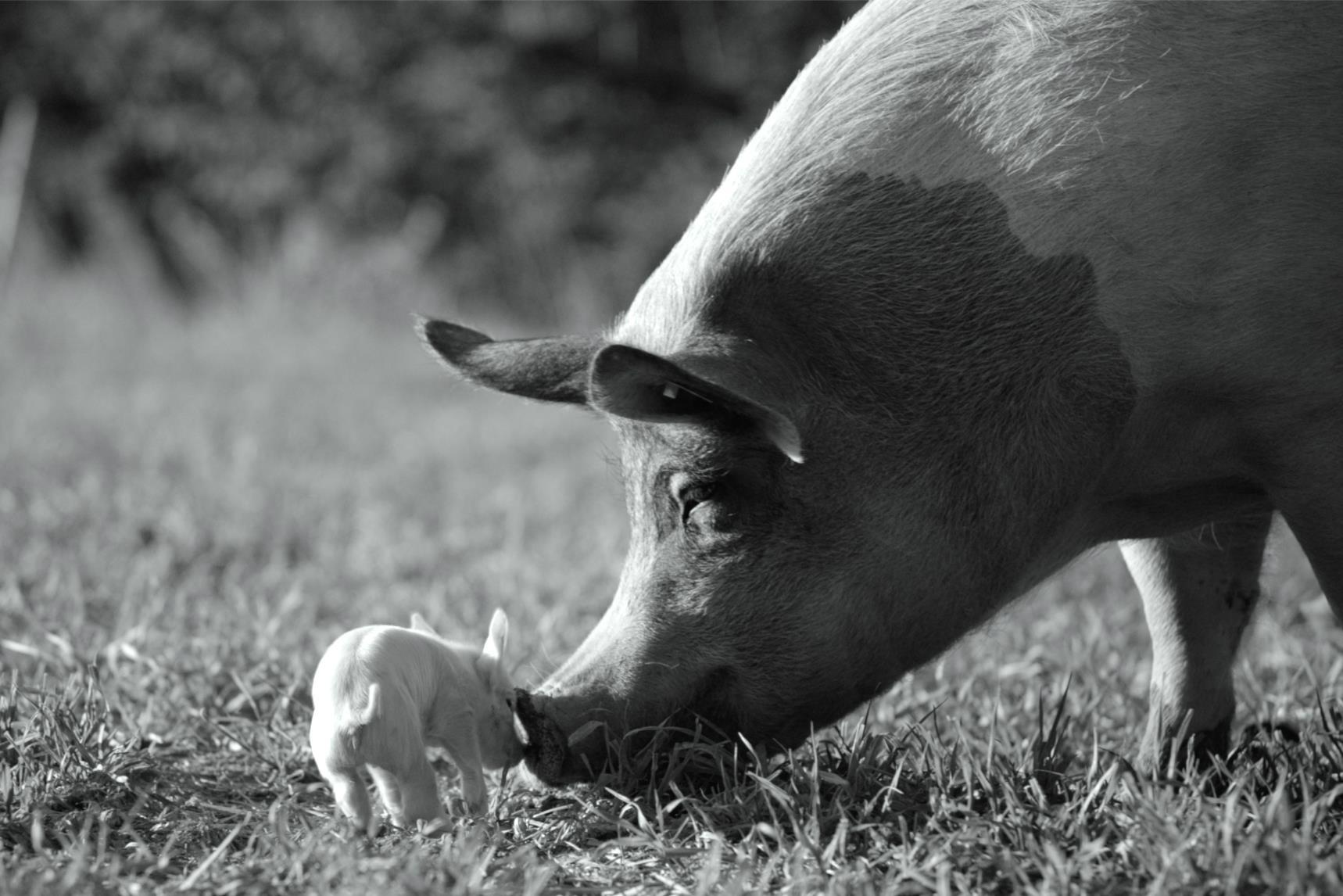 On paper, Victor Kossakovsky’s Gunda, a wordless documentary about the everyday life of a few farm animals—a mama pig, two cows, a one-legged chicken—may suggest a quiet idyll in the vein of the goatherding sequences from Michelangelo Frammartino’s Le Quattro Volte. But with its stark, forbidding black-and-white cinematography and dense, unsettling sound design, the film resembles nothing so much as Eraserhead.

The newborn piglets in Kossakovsky’s film, whose faces look surprisingly alien-like in extreme close-up and whose aching squeals can be rather unnerving, even at times resemble the baby from David Lynch’s cult classic. By eschewing the Disneyfied anthropomorphism of Luc Jacquet’s March of the Penguins and the tidy narrativizing of the Planet Earth series, Kossakovsky refuses to resort to the old cliché that animals are “just like us.” They’re not, really. And in Gunda, common farm animals have rarely seemed so un-human.

Which isn’t to say that we don’t form a relationship with these creatures. Relying heavily on shallow-focus shots often positioned near ground level—and thus close to its subjects’ eyeline—the film gives us something of the experience of being a farm animal: of grazing in a field, caring for a newborn, and aimelessly roaming around a farm. As in his prior work, Kossakovsky trusts his audience to stick with the film through lengthy shots where nothing in particular seems to be happening until, gradually, a miniature narrative begins to emerge. But while ¡Vivan las Antipodas! and Aquarela played out largely in a series of breathtakingly composed long shots that allowed the audience to drink in the scenery of various international locales, in Gunda, Kossakovsky follows the opposite impulse: pulling his camera in as close as he can get to these animals and keeping their environment largely out of frame.

In the film’s harrowing and unusual opening shot, a hog that’s lying down and seemingly in pain is framed by a barn door. Kossakovsky’s camera closes in with a slow Kubrickian zoom, but we don’t quite understand what’s happening here until a tiny newborn piglet emerges from behind its mother. She’s been giving birth, but Kossakovsky treats this usually joyous moment as if it were a death scene. Only by the film’s end do we truly understand why.

Sadly, the rest of Gunda is rarely so meticulously composed. The film’s meandering sequences tend to grow repetitive, only rarely crystallizing into meaningful or memorable form. There’s a tedium to much of Gunda that may be true to the lives of its animal subjects but makes for dull watching after the first hour. The scenes involving the mother pig and her children exert a fascinating pull—particularly the mother’s sometimes brutal parenting tactics, such as when she stomps on the runt of her litter—but the sequences involving the chickens and the cows feel like filler and a distraction from the pigs, who are the emotional core of the film.

As Gunda lurches toward its close, an impending sense of doom starts to hover over it as we begin to realize just how much these animals’ lives are directed, controlled, and circumscribed by human hands. But there’s an unfortunate lack of specificity here that’s rare in Kossakovsky’s work: Though shot across three different countries (Norway, Spain, and the U.K.), the film feels as though it’s all taking place on a single farm, one that could be located almost anywhere. That universality is undoubtedly the point, as Gunda isn’t simply an observational documentary, but one with a message about the cruelty of livestock agriculture. Though the creatures at its center live in relatively pleasant free-range environments, a far cry from the industrial hellscapes denounced by documentaries like Food, Inc. and vividly depicted as essentially a death camp in Bong Joon-ho’s Okja, they’re ultimately objects of exploitation. The human use of animals for livestock is, the film suggests, inherently brutal. If Gunda never subjects us to gruesome images of slaughter à la Georges Franju’s Blood of the Beasts, it nevertheless closes with a prolonged single-shot sequence that’s more heartbreaking than any depiction of the goings-on in an abattoir ever captured on film.

In this sequence, a truck pulls up to the barn where the pigs live and drives off with the piglets, leaving the mama pig in a state of grief-stricken perplexity. For minutes on end, we watch her pacing around, clearly distressed and unable to fathom why her piglets have been taken from her. It’s the kind of viscerally upsetting moment that, as Orson Welles said of Leo McCarey’s Make Way for Tomorrow, would make a stone cry. And if this conclusion doesn’t quite make up for Gunda’s fundamental monotonousness, it does at least lend some shape and significance to the rambling sequences that precede it, calling into question how free these free-range animals really are. By the time the credits roll on the film, we realize we’ve been watching not so much a sketch of the lives of farm animals as a threnody for their deaths.

Review: Time Is an Oblique Look at Black Lives Undone by the Prison System