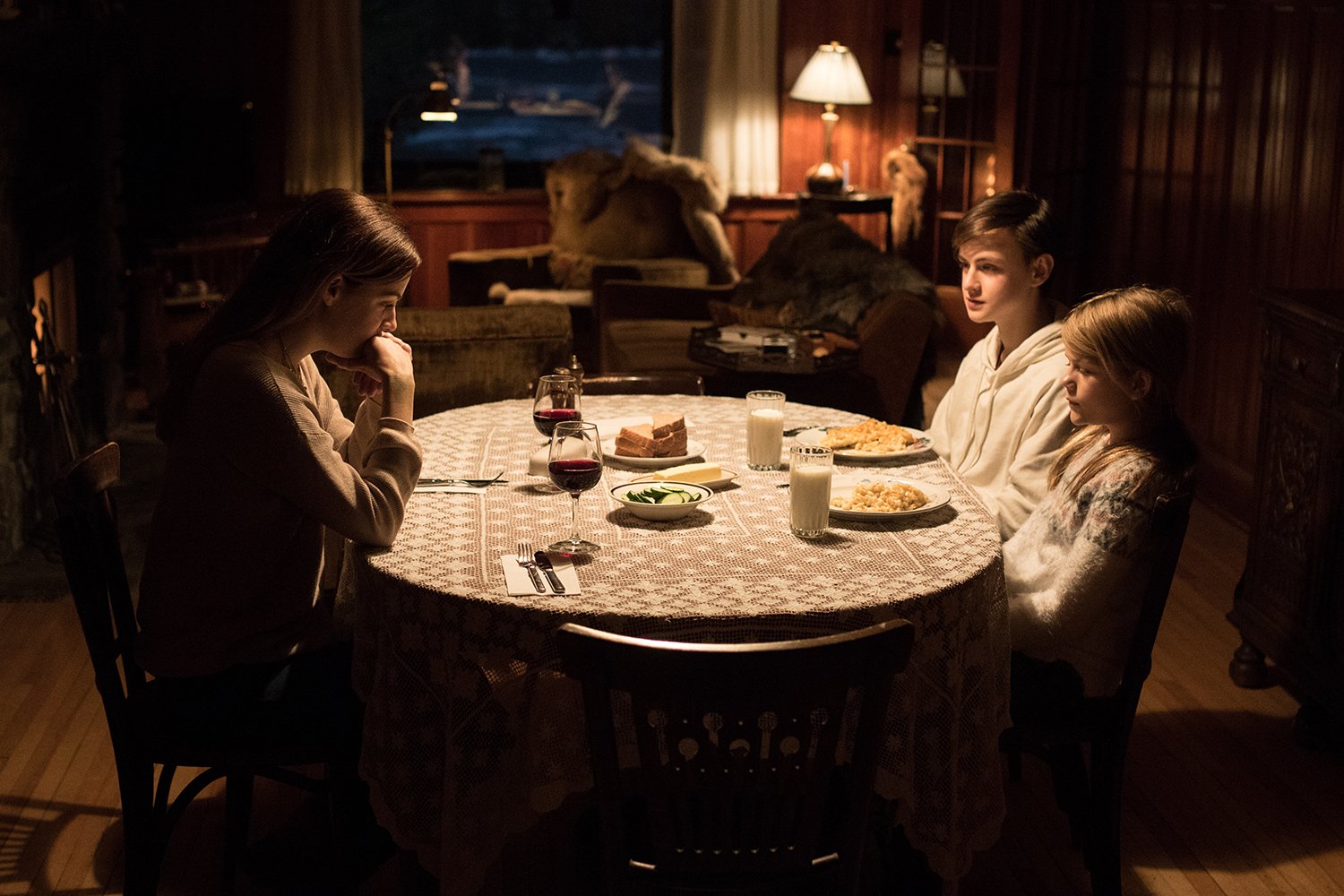 Severin Fiala and Veronika Franz’s The Lodge craftily slips between various horror modes, from spiritual nightmare into material hell, maintaining its core mystery until its final reveal. At the start, almost every inch of any given room’s floor and ceiling makes it into the frame, and the effect is nothing short of claustrophobic, reminiscent of the dollhouse whose interiors Thimios Bakatakis’s camera enigmatically prowls throughout the film. Almost every shot in the The Lodge’s first act feels composed against convention and intuition. Meanwhile, the camera tracks forward relentlessly, if self-consciously, so dizzying that it can feel nauseating, as the story hurtles early on toward a startling act of violence.

The film just gets more disorienting from there. Richard (Richard Armitage), recently separated from his wife Laura (Alicia Silverstone), is now dating a younger woman, Grace (Riley Keough), who his children, Aidan (Jaeden Lieberher) and Mia (Lia McHugh), blame for tearing the family apart. In Grace’s first few appearances, we can’t make her out very clearly, floating as she does through a distant gate like a ghost or standing on the other side of frosted glass. She’s a shadow onto which the characters and audience can project their suspicions. As a child, she was the only survivor of her father’s Jonestown-like suicide cult—left alive to spread its doomsday message. After therapy and medication, she seems to be okay, but religious icons still unsettle her, and her past experiences haunt her subconscious in dreams.

Richard plans to marry Grace, and he wants his teenage son and tween daughter to get to know her better. So the four head to the family’s soon-to-be-snowbound lodge in order to spend the days together leading up to Christmas. Early on, unusual seasonal imagery, like a row of hanging display turkeys, enhances the eerie atmosphere of the film, but other objects, such as the domineering crucifix in the lodge’s dining room, more explicitly connect the reason for the season to Grace’s troubled background and mental state.

At one point, Richard is called home for work, leaving the stepmom-to-be and her two resentful charges to get closer. But that’s just when things get their weirdest. One morning, everything disappears: the TV, the portable heater, their clean clothes, even Grace’s meds. A blizzard hits, the generator goes out, the pipes freeze, and the dog disappears. Dozens of perfect snow angels, arranged with precise geometry, cover the front lawn.

On top of this, Grace starts to become unmoored without her pills: She hears her father’s preaching while wandering the lodge at night—through limited light, atop groaning floorboards—and starts to have strange visions. She’s submerged into a psychological nightmare, and the filmmakers take us with her, suggesting that she and the future step-kids are dead, that Christmas is already over, and that they’re all just wandering a snow-blanketed limbo, waiting for condemnation, redemption, anything to happen.

A twist snaps the film out of its supernatural mystery and into a frank and terrifying domestic reality, as Grace’s repressed religious fervor, pushed past its breaking point, returns crazedly to the fore. This is very much a film about the dangers of fundamentalism, but from the distance of the end credits, the story feels implausible and overcooked, because a certain act of defiance requires too much cunning, planning, and impeccable execution from characters who otherwise show no unusual aptitude for spectacle and skulduggery. It feels like it’s the filmmakers pulling off this trick, not the people inhabiting their film.

Then again, The Lodge was co-produced by the resurrected Hammer Films, whose logo appears at the start, cluing you in that this film will be in keeping with the studio’s historically campy tradition, even if its grave tone often pretends otherwise. It’s best appreciated not with the parts of your brain responsible for reason and judgment, but in the unthinking terror centers, where the film’s style of God-fearing fanaticism also resides.