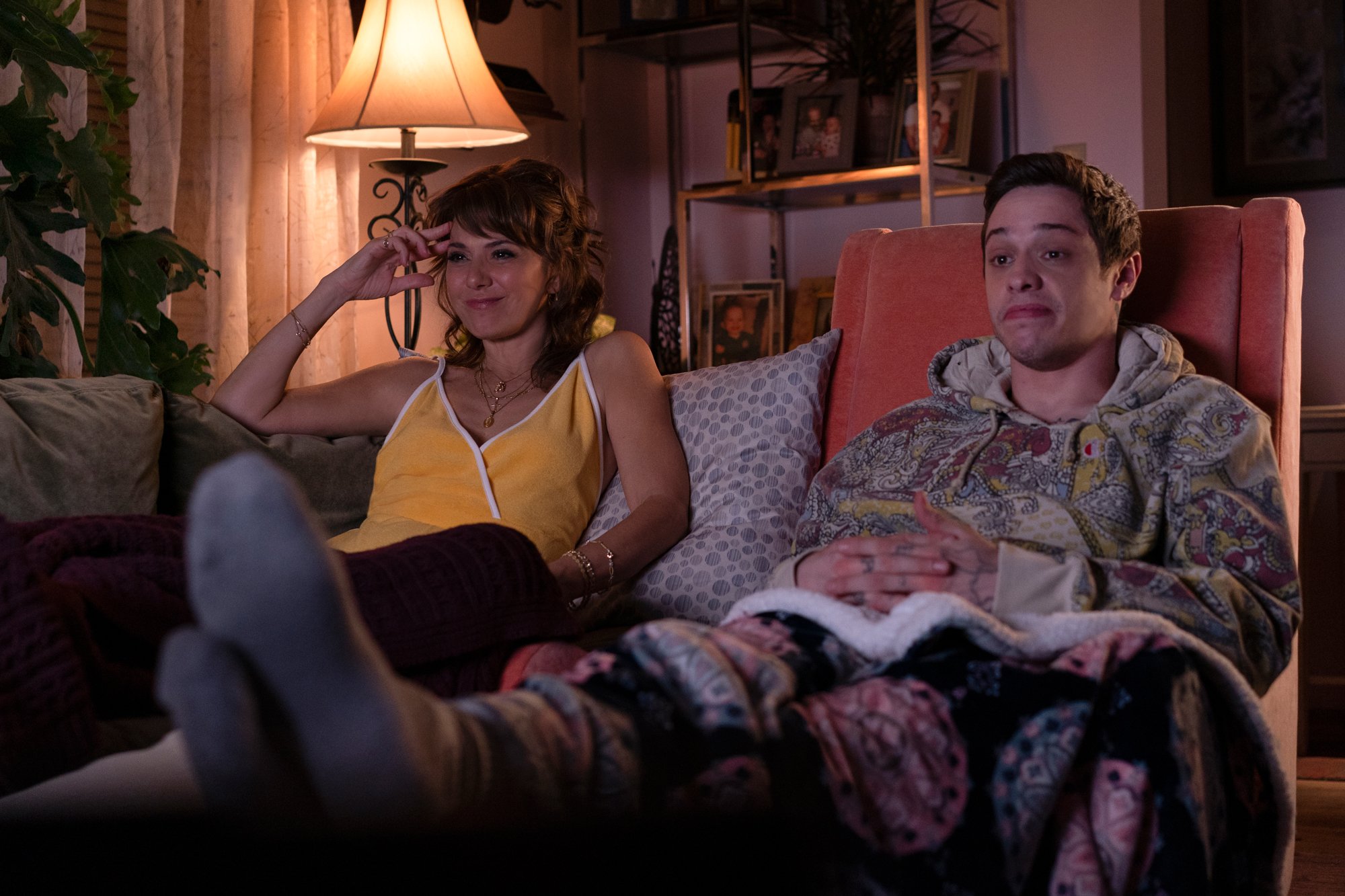 Judd Apatow essentially invented the dude-bro romantic comedy, mixing sentimental coming-of-age tropes with profane, improvisatory riffs uttered by characters very much modeled after the actors playing them. The looseness of his films is their secret weapon, as we come to feel as if we’re hanging out with these characters, which effectively lends a sense of camaraderie and reality to formulas that have existed for decades. But Apatow’s films tend to be undermined by their sentimentality, lacking as they do the invigorating go-for-broke ruthlessness of the films his protégé Seth Rogen has directed with Evan Goldberg. There’s often a sense in Apatow’s directorial work that he’s holding back, betraying fruitful, unruly premises for the sake of a message that essentially amounts to “grow up.”

The King of Staten Island is another Apatow film about a man-child learning to take pride in himself, but it’s strikingly animated by pain. Apatow refines a sense of counterpoint that has driven most of his films: Characters joke and bust each other’s balls while physically revealing their sense of sadness and need. Early in the film, twentysomething Scott (Pete Davidson) and his friends are hanging out smoking weed in a basement when a woman new to the group says something about Scott’s father, who died years ago on the job as a firefighter for the FDNY. Scott isn’t over his father’s death, though he concocts a variety of jokes about his indifference to the subject, and as he talks, his friend Igor (Moisés Arias) leans over and embraces him. Seeing Scott’s actual pain, Igor grants Scott mercy, and Apatow has the confidence and daring not to overemphasize the gesture, as he has with similar actions in his other films.

Apatow understands that Pete and his crew relentlessly hate themselves—feelings that bubble up in surprising, moving, and funny ways across The King of Staten Island’s running time. Looking at pictures of a woman Igor is talking to online, Scott and his buddies assume that she must be a “catfish” because they say she’s too good-looking for him. Their casually unflattering estimation of their friend is pitiful and characteristic, and it reflects their sense of being losers. Scott is alarmingly comfortable with throwing himself under the bus, speaking of his stupidity, his Crohn’s disease, or what he perceives to be his insanity. Apatow and Davidson dramatize a very particular, insidious form of self-pity: Scott does hate himself, but he’s also scamming those in his periphery, particularly his family. As long as he’s a loser, he doesn’t have to move out of his mom’s house or try to do much of anything.

The King of Staten Island has several startling moments that reveal the depths of its main character’s emotional paralysis. When Scott’s sister, Claire (Maude Apatow), who’s on the verge of leaving for college, tries to get him to promise that he’ll let their mom, Margie (Marisa Tomei), live her own life, he eventually insists that he’s capable of hurting himself, deflecting instead of acknowledging his part in holding Margie in a suspended state herself, in which she’s forced to treat him as a child. Apatow and Davidson play the scene as a joke, but it stings, and this is another of the film’s intuitive emotional counterpoints.

The film, too, is often concerned with the glories and embarrassments of middle age. Tomei is heartbreakingly resigned as Margie, allowing the character’s tiredness—with loneliness, with justifying Scott’s screw-ups, with her shifts as a nurse—to bleed through her skin. And Apatow has a real sense for how smart, sad people can talk. Margie is a beautiful woman who’s been alone for years, and her sister, Tara (Carly Aquilino), gesturing toward Margie’s body, warns her not to “let that go to waste.” The joke, casually delivered, hits three targets at once, as Tara is revealing her insecurity, her envy of Margie, and her fear for her sister. When Margie starts dating another fireman, Ray (Bill Burr), she has to ask if he’s flirting with her, which he affirms with a poignant straightforwardness that suggests loneliness as well as an exhaustion with beating around the bush. These people, who’ve been alive long enough to know that time wasted is inexcusable, bring into stark relief the indulgence of Scott’s flailing.

The jokes in The King of Staten Island build on one another, revealing character and offering a fully formed atmosphere. The characters’ hatred of themselves mirrors their simultaneous disdain and respect for Staten Island. (Davidson, who co-wrote the screenplay with Apatow and Dave Sirus, gets off many terrific one-liners, and one of the best is “Even New Jersey looks down on us.”) Apatow also allows characters to keep surprising one another, and us. As selfish as Scott initially is, he’s capable of moments of imagination and generosity. When he’s tasked with walking Ray’s children, he bonds with them, and, in a moment that reflects his longing for his father, advises them to kiss each other goodbye. When Scott says something insensitive to a potential girlfriend, Kelsey (Bel Powley), she laughs it off defensively while visibly crumbling. When Ray allows Scott, a tatted-up guy with ludicrous dreams of fusing a tattoo parlor with a Ruby Tuesday’s, to ink his back, it resounds as a gallant sign of acceptance.

Apatow has preached of the need for maturity and work without examining what that means in practice. When the stoner at the center of Knocked Up effortlessly gets an office job without any apparent schooling or experience, the moment rings hollow. Here, the process of Scott’s awakening is acknowledged. Scott needs to get a job and hang with decent men who can offer him surrogate father-ship, which might have felt pat if those men weren’t played by Burr and Steve Buscemi (a former firefighter), among others, who imbue their characters with the palpable weight of experience—with a sense of disappointment and loss. And this working-class texture informs lingering shots of Scott washing a fire truck and doing other errands.

The King of Staten Island is obsessed by the ideal of community, a theme which Apatow dramatizes here with an almost Eastwoodian rapture. And that ideal, a form of continuity, is evoked and confirmed in the film’s moving end credits, which reveal that Pete Davidson’s father, a deceased firefighter, was named Scott. In this moment, one is driven to wonder if Davidson is wrestling with a ghost, offering his father homage as well as benediction.

Review: Abel Ferrara’s Tommaso Both Rues and Relishes the Power of the Artist