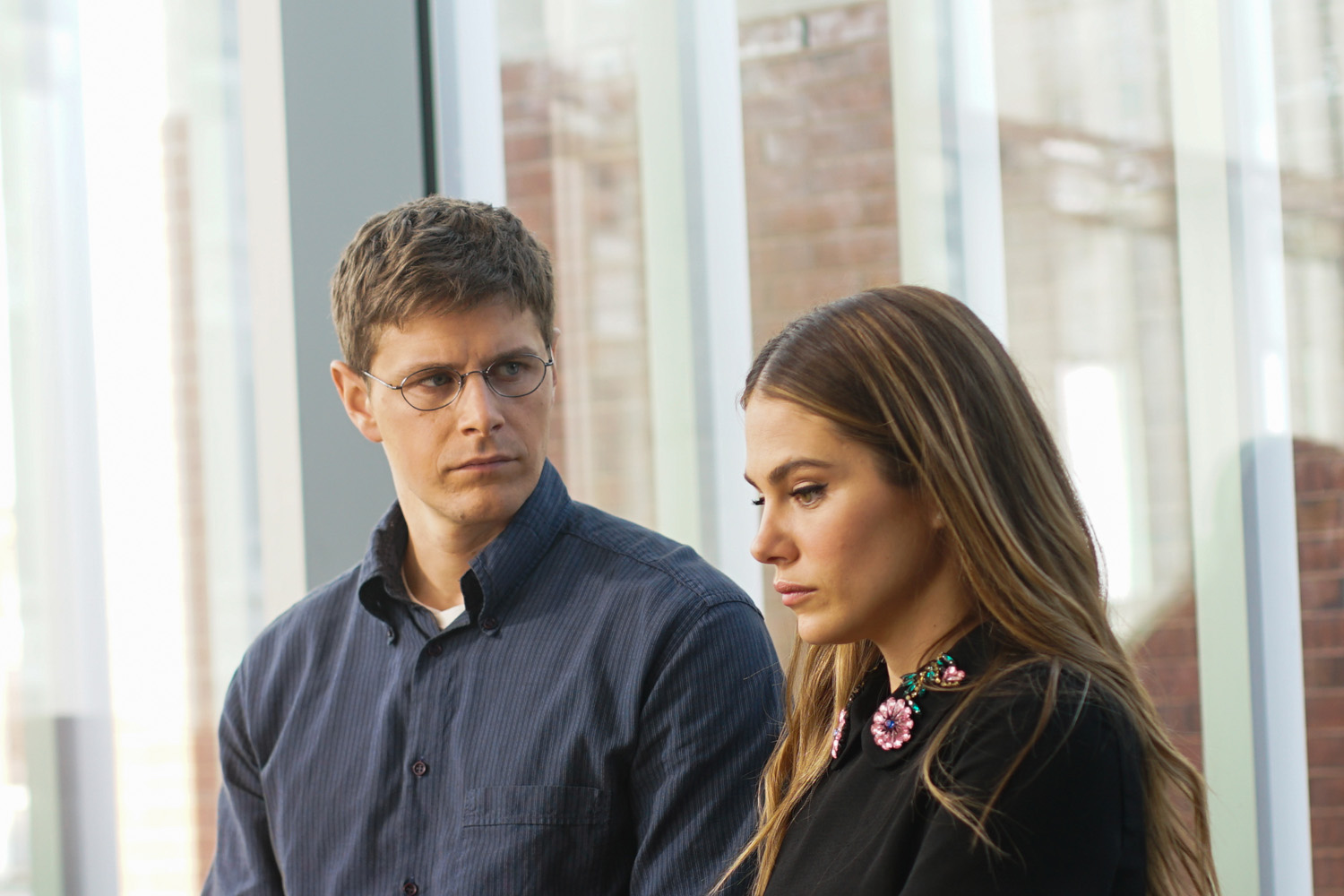 In The Fall of the American Empire’s first scene, a newspaper deliveryman named Pierre-Paul (Alexandre Landry) makes a case to his girlfriend, Linda (Florence Longpré), that will be familiar to many a frustrated intellectual. He insists that capitalism rewards idiots and stunts people of true perception, as only “idiots” can take capitalism seriously enough to peddle it, inadvertently utilizing their sincerity as a seductive sales tactic. Whether speaking of a first-class vacuum cleaner salesperson or one of the world’s great writers, Pierre-Paul sees successful individuals as being conditioned by society to value emotional fervency over intellectual acumen—an observation that inevitably climaxes with despairing talk of Donald Trump’s election. Pierre-Paul has a point, to a degree, but as he continues to vent it becomes evident that his notion of idiocy is more or less defined as a willingness to commit to one’s self-mythology. In short, Pierre-Paul resents people possessed of confidence, and so it’s hard to separate his sociopolitical outrage from garden-variety bitterness.

The title of writer-director Denys Arcand’s latest represents a salesman’s come-on in itself, suggesting an epic critique. Instead, The Fall of the American Empire is a droll crime farce in which Pierre-Paul, an everyman who feels that his intelligence hasn’t been sufficiently appreciated by society, lucks into a way to turn capitalism to his advantage. Armed with a degree in philosophy (thus explaining his inability to make much of a living), Pierre-Paul routinely comments on the debauched American lifestyle, which equates money with identity and raw will with leadership, while recruiting a team of misfits to launder the millions of dollars that literally drop at his feet when he stumbles into a robbery gone awry.

Arcand’s film blends liberal hot takes with the more traditionally visceral pleasures of crime cinema, and the fusion yields an unusual and compellingly crisp tone in which violence competes with lectures on the inequality that sparks, well, violence. At times, Arcand’s lucid style is reminiscent of David Cronenberg’s own, particularly in the strip-mall heist that kicks the plot into motion. Arcand films the heist clearly and deliberately, with long tracking shots that often end with startling bursts of carnage. This set piece is especially unmooring for following the self-righteous civics lecture that Pierre-Paul delivers to Linda, causing us to wonder how these threads intersect. Right after this heist is another crackerjack flourish, in which Pierre-Paul hides the money in his delivery truck seconds before the police arrive.

The ease with which Pierre-Paul steals the money suggests that Arcand is willing to satirize his protagonist as a man who can just as easily slide in the world of capitalist grifting as the successful people he disdains. But The Fall of the American Empire wants it both ways, as Arcand knows that Pierre-Paul is a bit of a prig, who immediately spends some of the money on a beautiful and cultured escort, Camille (Maripier Morin), but the filmmaker also goes out of his way to underscore Pierre-Paul’s selfless acts at a homeless shelter. Pierre-Paul eventually uses this shelter as a front, but Arcand doesn’t mine this development for its inherently wicked irony: that the homeless are being exploited to enable the lifestyle of the rich, as they are, more insidiously, in real life. Arcand is afraid to portray Pierre-Paul as a hypocrite, and this skittishness somewhat neuters his obvious yet trenchant theme.

The film is rife with other sentimental indulgences. Camille is the classic hooker with the heart of gold, who predictably falls for Pierre-Paul’s innocence and helps connect him with the movers and shakers who have the power to clean the stolen money. On one level, this development represents another missed opportunity. Pierre-Paul and Camille’s first coupling is fueled by the erotically chilly commodification of sex, which enables two people residing in different sexual castes to briefly become equals. Camille ties him up in a chair and rides him, correctly reading Pierre-Paul’s insecurity and answering it with a submission fantasy. As such, the scene evinces both the exhilaration and the dehumanization of capitalism, which Arcand shortchanges when he turns Camille into a conventional love interest.

Yet Camille’s generosity and political connections also allow Arcand to cap his narrative with a prolonged and surprisingly elaborate analysis of how money is internationally laundered. We’re made privy to the formation of shell companies, to the rigged election of boards, and to the deliberately labyrinthine transport of the money itself. (A crook memorably says that the money will go through London, for a patina of elegance.) Arcand’s sense of humor returns to him in this sequence, as Pierre-Paul accesses what are, for most of us, infrastructures of suppression. Money laundering is a way of denying society resources, keeping much money trapped at the very top of the communal iceberg. This white-collar criminal activity is contrasted with blue-collar methods of money tracking, the latter most notably illustrated by a nasty torture technique in which a man’s arms are torn out of his sockets.

Though fascinating, The Fall of the American Empire nevertheless feels a little dry and pat. Once they’re defined for the audience, the film’s characters never do anything that might upset the delivery of Arcand’s treatise on greed, as they’re pawns that he moves through a series of preset motions. (In this instance, one can discern the similarities between the requirements of plotting and of capitalism.) Despite a few undeniably intense and lurid moments, the film lacks the pulsating fury of a significant genre work, and its leftist outrage, while persuasive, doesn’t include any points that feel particularly new. One senses, rather provocatively, that Arcand is deliberately conjuring an air of futility.

Review: Too Late to Die Young Keeps Politics, and Its Audience, at a Distance