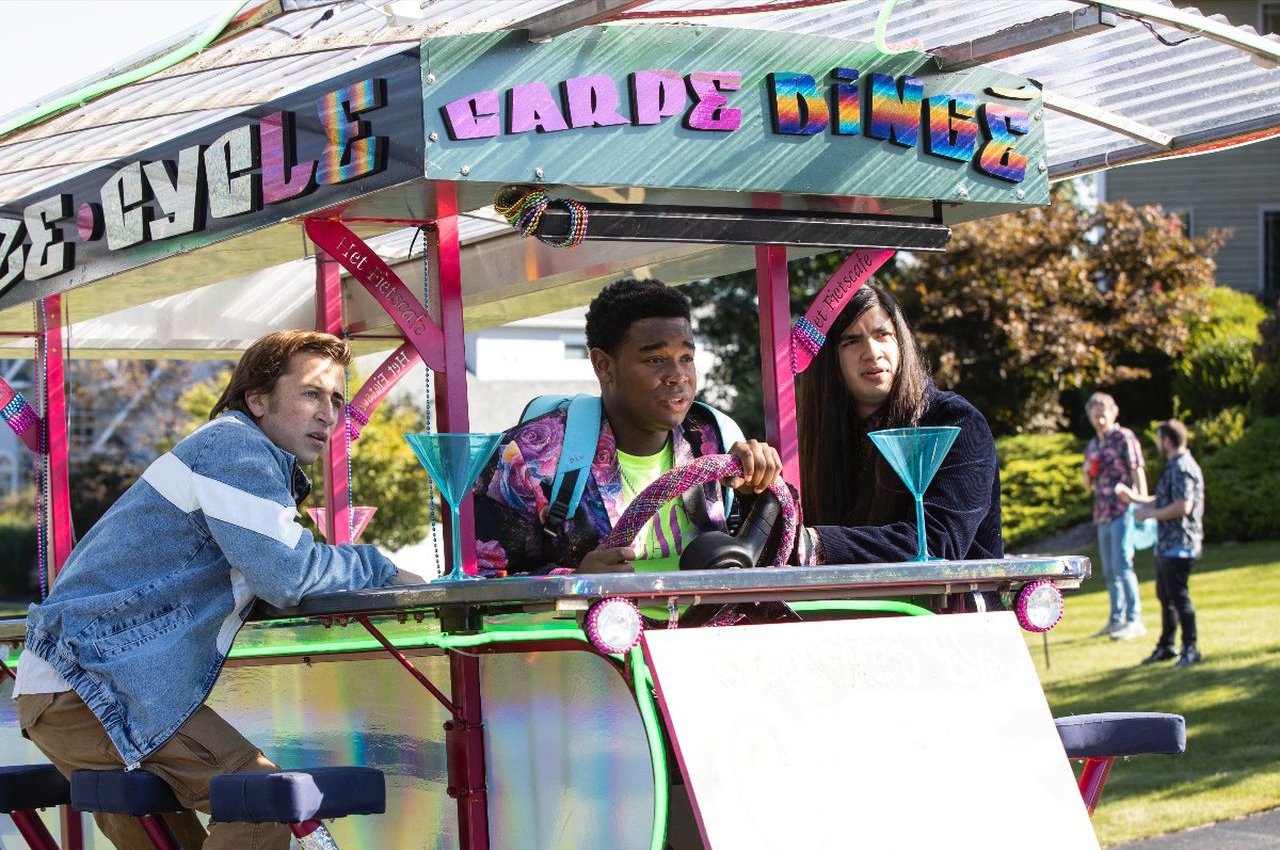 Jeremy Garelick’s The Binge is a riff on The Purge that doesn’t live up to the potential of its premise: In the future, alcohol and drugs are illegal in America, except for one day a year known as “Binge Day.” But given that it focuses on three high schoolers eager to partake in their first Binge, the film instantly loses its novelty, as alcohol and drugs would be illegal to them anyway in the real world. With their party-hardy ambitions, Griffin (Skyler Gisondo), Hags (Dexter Darden), and Andrew (Eduardo Franco) are akin to the dudes at the center of your average teen comedy, and as the three friends go on a night-long quest to the ultimate bash to find girls, including Griffin’s longtime crush, Lena (Grace Van Dien), The Binge comes to feel closer to a Superbad knockoff than a twist on The Purge.

One may wish that Garelick had broadened the film’s scope and mined comedy from how a varied assortment of personalities and people celebrate, or don’t celebrate, the Binge. Early on, the filmmakers zero in on such an alternative perspective in the form of Lena’s uptight father, Principal Carlsen (Vince Vaughn), as he’s a member of an older generation that’s grown progressively puritanical after witnessing many a Binge—but even he turns out to secretly be a veteran partier cut from the same infantile cloth as Griffin, Hags, and Andrew.

Male-centric teen comedies are often beholden to retrograde views of gender, but The Binge’s objectification of its female characters is as hyperbolic as its irritating dick jokes. Almost every female in the film is a maniacal sex addict, and one rare exception is the target of ridicule for having ruined her looks as a result of a party gone wrong. This portrayal of women tracks with the film’s generally puerile worldview, which extends to the realm of human repression: If The Purge cynically saw humans as itching to unleash their pent-up violence, The Binge recognizes us all as horny nitwit fratboys at heart who need an excuse to cut loose.

Review: Epicentro Wrestles with Our Image of Cuba, Real and Imagined