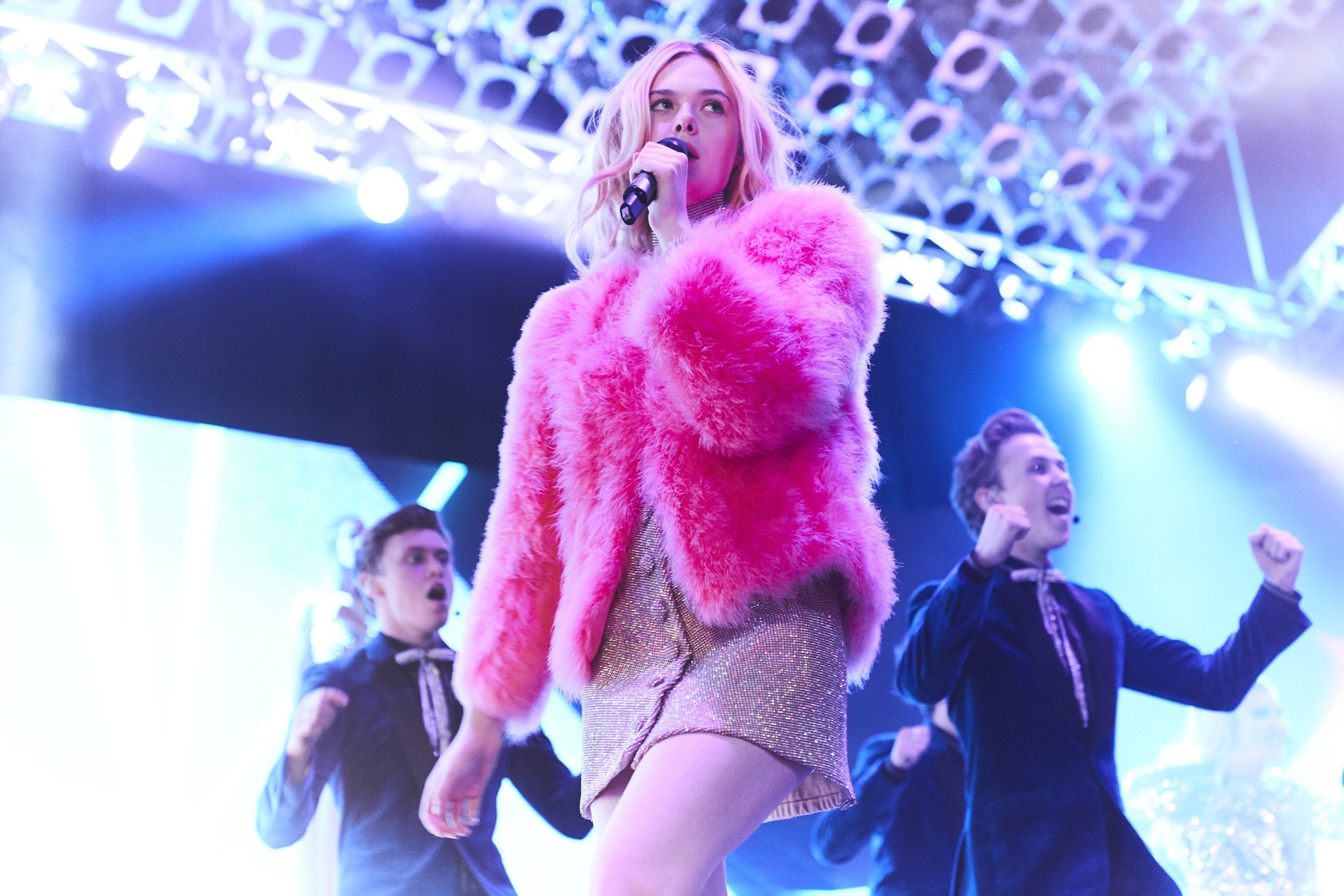 Max Minghella’s Teen Spirit opens with the shy Polish-British social outcast Violet (Elle Fanning) milking a goat on her family farm while the pulsating synths and soaring vocals of Grimes’s “Genesis” fill the soundtrack. Though surrounded by so much pastoral beauty, Violet is enraptured only by the music blaring through her earbuds—a galvanizing reminder of her desire to become a pop singer. But with the increasing demands of school, work, and choir practice, the latter two of which her strict mother, Marla (Agnieszka Grochowska), has thrust upon her, her only opportunity to flaunt her unique talents as a singer is in front of a sparsely populated pub full of half-conscious drunks.

Minghella doubles down on the oppressive sense of isolation that plagues Violet by not only setting the film on the Isle of Wight, an island off the south coast of England, but also by placing the young singer among a community of Polish immigrants who are looked down upon by others on the island. Minghella makes the most of this unique setting early on, situating Marla and Vlad (Zlatko Buric), the over-the-hill musician who takes Violet under his wing, in a context that feels culturally and regionally specific, lending these characters a lived-in authenticity that helps to mitigate the sense that they’re familiar archetypes.

When Teen Spirit homes in on the unlikely connection between Violet and the boisterous, alcoholic Vlad as he coaches her through tryouts and travels with her to mainland England to take part in the early rounds of the Teen Spirit singing competition, the film displays a keen understanding of what draws the two together. Buric’s lovably brash and crass old pro plays the perfect counterpoint to guide Fanning’s intensely inward, almost unreadable protagonist, yet their tender, father-daughter-like bond is also fraught with tension and thorny complications stemming both from Violet’s immaturity and Vlad’s troubled past.

The two lean on one another to fill an emotional void—for Violet it’s an absent father, and for Vlad it’s a chance at redemption—but Minghella doesn’t shy away from the selfish motivations the drive both characters. Violet knows that Vlad is the only person willing to fully support her dream, while Vlad understands that this may be his last opportunity to relive the all but forgotten musical success of his youth and, more pragmatically, to make some real dough.

Theirs is a compellingly offbeat and volatile friendship, but Minghella is ultimately unable to shake Teen Spirit free from the tried-and-true formula of so many films about an artist’s rise to fame. Teen Spirit is rife with generic and thinly conceived hurdles for Violet to overcome. At first, her biggest obstacles are a catty singing rival, Anastasia (Millie Brady), at school and the judgy, conservative church congregation that questions the morality of her involvement with Teen Spirit. But then a devilish label rep, Jules (Rebecca Hall), arrives on the scene to tempt the green songstress with limitless resources and the potential of dating the hot, young star, Keyan Spears (Ruairi O’Connor), who she signed after last year’s competition.

In the end, Minghella rests the entire film on Fanning’s performance. The actress is equally convincing as an insecure ingénue as she is a burgeoning star, and she’s so compelling that she’ll make a believer out of anyone who’s grown cynical about the transformative power of pop. But ironically, as the singing competition grinds down all of Violet’s various idiosyncrasies to ready her for primetime, Teen Spirit itself leaves the setting and characters that made it somewhat singular in the rearview mirror, all too ready to transform into just another shiny pop object indistinguishable from so many others before it.

Review: The Pomp of Girls of the Sun Saves the Film from Its Disjointed Structure