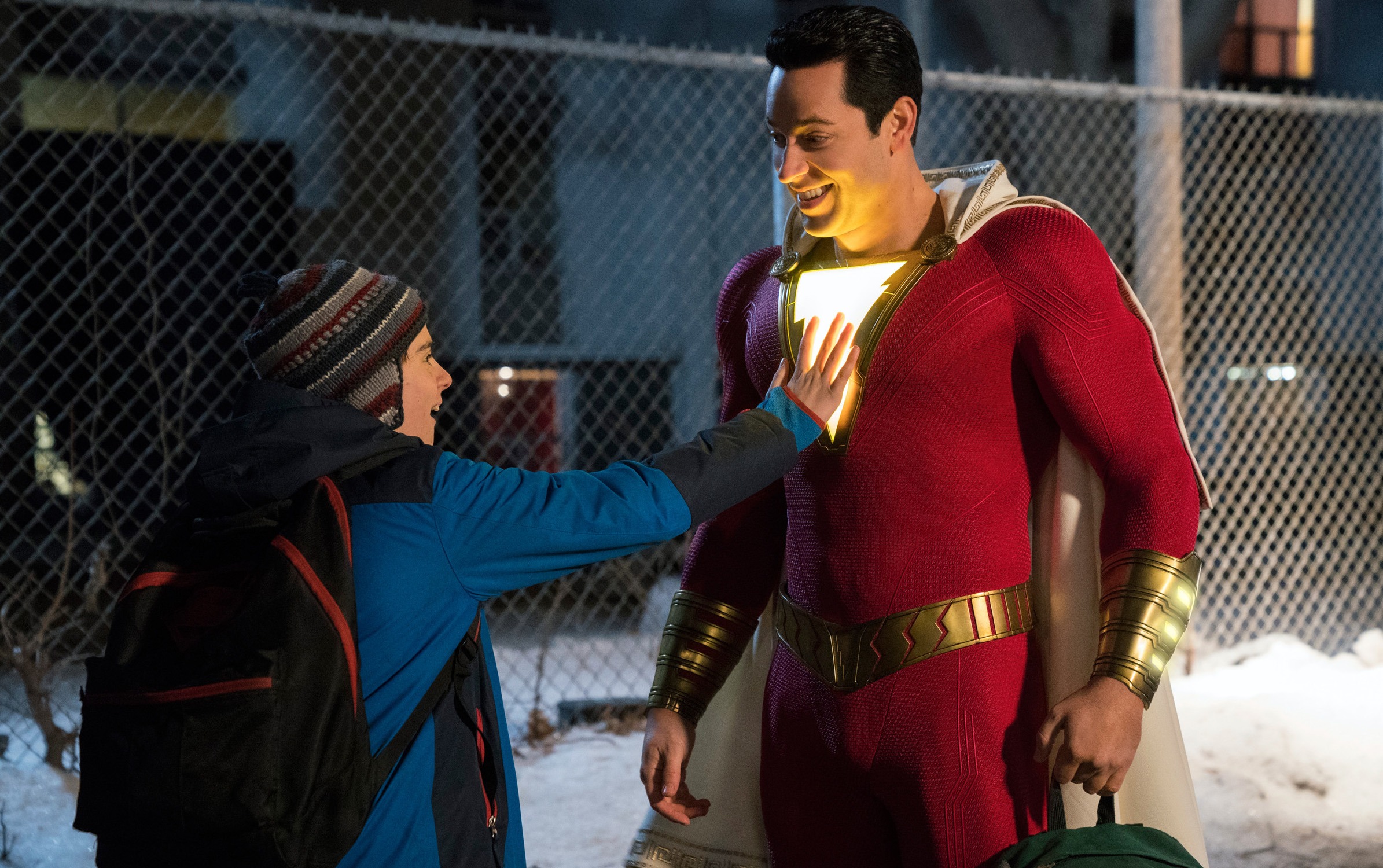 The movies don’t lack for superhero stories that deal with the angst and isolation of young people who’re radically different from those around them. But few of them are quite like David F. Sandberg’s Shazam!, which foregrounds the rush of bafflement and elation that grips a down-and-out child who’s suddenly given the power of a god, potentially allowing him to bypass all of the pitfalls and anxieties of adolescence.

Billy Batson (Asher Angel) is a prickly 14-year-old foster kid who’s transformed by a wizard (Djimon Hounsou) into the adult Shazam (Zachary Levi) and tasked with defending the world against the Seven Deadly Sins. To the film’s credit, it smartly treats this premise as inherently absurd, embodied right away in Billy’s inability to stop cracking up when he’s first presented with this quest. And upon becoming Shazam, the boy can hardly hide his giddiness as he toys with his powers while also using his new body to buy beer and get into strip clubs.

Levi plays Shazam with the stunted, maladroit social skills of the teenager behind his muscular frame. Each time Shazam discovers a new skill, he reacts more like a spectator than the person performing these feats, his eyes bugging and head bobbing as he excitedly exclaims that he has the gift of super speed and is impervious to bullets. Eschewing the Manichean moral questioning typical of superheroes trying to determine whether they should devote themselves to good or evil, Billy uses his powers as a teen realistically would: to do meaningless “cool shit” like conjuring lightning to charge phones or high-jumping over buildings just to impress random passersby, with whom he takes selfies for a donation.

In many ways the heart of Sandberg’s film is the relationship between Billy and his foster-home roommate, Freddie (Jack Dylan Grazer), a disabled boy whose nerdy obsession with superheroes makes him the inadvertent but ideal sidekick to Billy as he fine-tunes his superpowers. When discussing Billy’s newfound abilities, the teens are given over to breathless excitement, and Freddie’s deadpan sarcasm is the ideal foil for Billy’s childish glee. Freddie is alternately awed and frustrated by Billy’s new gifts, and embedded in his wisecracking is an obvious envy that he nonetheless struggles to overcome.

In that sense, Freddie is as much a foil for the film’s villain as Billy. Thaddeus Sivana (Mark Strong), who was also pegged by Hounsou’s wizard as a would-be champion only to be denied his superpowers due to the darkness in his heart, has been nursing his wounded pride for decades. After finally tracking down the wizard, Sivana frees and gains the powers of the Seven Deadly Sins, and he seeks to steal Shazam’s powers as revenge for the shame that haunts him.

Sivana’s lingering resentment lends a stunted petulance to his terror spree, suggesting that he, like Billy, is a child trapped in an adult body, and there’s a certain logic that their showdowns occur in such locations as a shopping mall and a local carnival. The solipsism of Sivana’s rage makes for lower stakes than we’re used to from your average superhero film, but the upside of that is that Shazam! doesn’t end with some giant, incomprehensible CGI battle.

Shazam! sees DC combining the golden-age optimism espoused by Wonder Woman and the jubilant, self-aware silliness of Aquaman into a satisfying whole, even if the narrow scope of Billy and Sivana’s conflict does lead to stretches of downtime where thematic and narrative points are rehashed to the detriment of the film’s otherwise brisk pace. In stark contrast to the politically nihilistic and aesthetically grim Batman vs. Superman, Shazam! offers a charming, even moving throwback to the aspirational sense of belonging that marks so many comics.

Review: In Andrea Bussmann’s Fausto, Seeing Is a Matter of Supreme Knowing