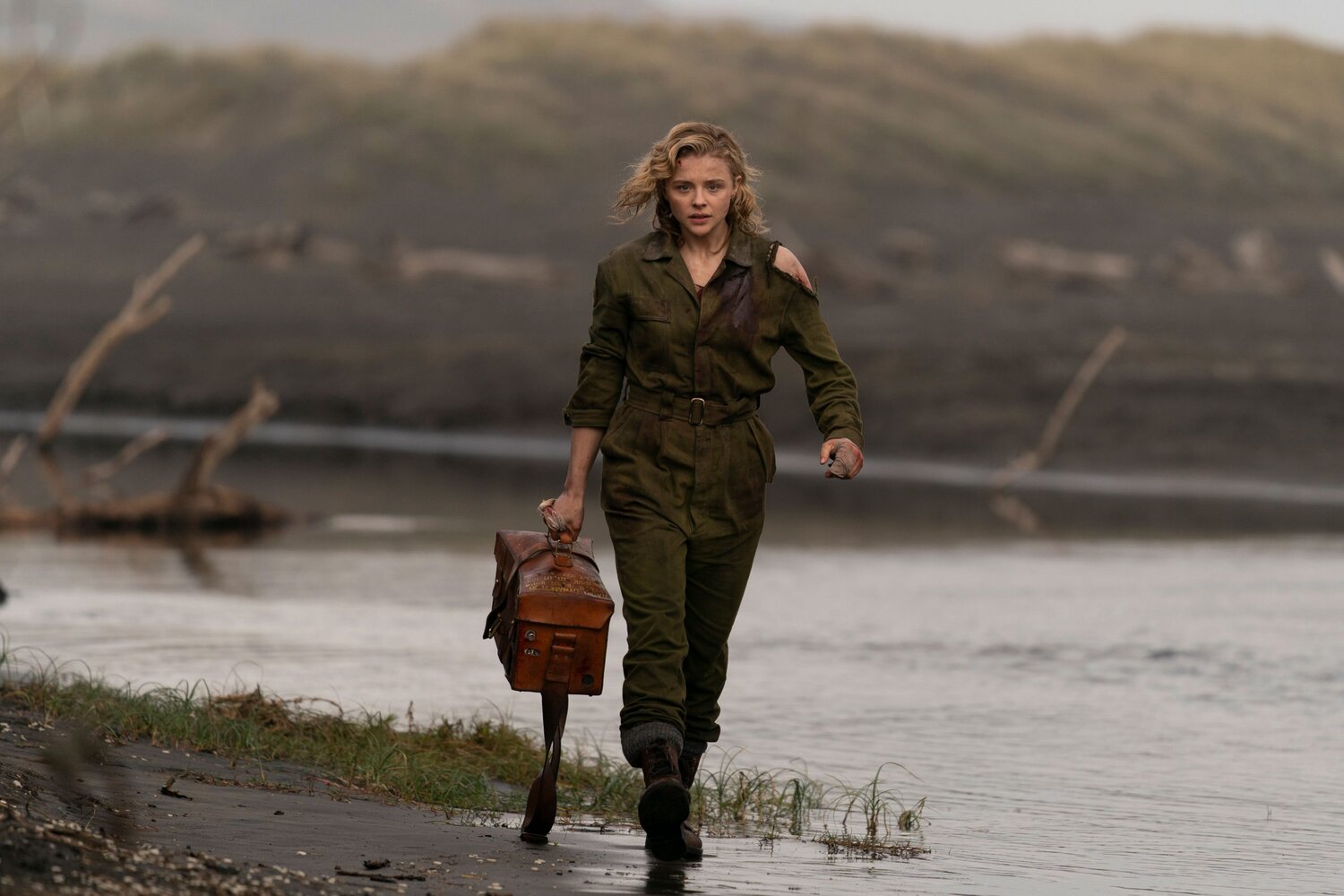 Much of the early stretches of Roseanne Liang’s Shadow in the Cloud focus on Flight Officer Maude Garrett (Chloë Grace Moretz), on a secret mission to deliver a highly classified package, as she sits in the gun turret of a WWII bomber. Initially, we see the plane’s crew of rowdy, horny airmen dismayed to have a “dame” on board, but once she hops down into the turret, close-ups on her face are just about all that we see, and the effect is striking. Barring a few cutaways of the men addressing the camera against a misty background that seem to signify Maude putting names to faces, the men are just heard over the radio. Their constant chatter ensures that Shadow in the Cloud could hardly be mistaken for something quiet and contemplative, but the framing of Maude inside the turret evinces a spare economy that belies the film’s eventual and preposterous turn toward maximalism.

At first, the men aren’t aware that Maude can hear what they’re saying about her, namely their fantasizing about what to do with the first woman in their vicinity since the one they painted on the plane’s nose. And when she speaks up, they begin questioning her credentials as well as her very presence on the mission, dismissing her as overly emotional. By the time things start to really go wrong—from the claustrophobic turret’s door handle snapping off in her hand to an enemy fighter approaching in the distance—the thick layer of hostility has successfully corralled us into Maude’s corner. Indeed, we’re with her when she initially hesitates to warn the crew about the bat-like creature she sees clinging to one of the plane’s wings.

The film hinges on a very capable Moretz in the way that Steven Knight’s Locke does on Tom Hardy as he sits in the driver’s seat of a car. But soon enough, Shadow in the Cloud veers away from the oppressive tension of Maude’s confinement and into the terrain of ridiculous action predicated on impressive displays of upper-body strength. And as emphasized by some bizarre music choices, the shift is as jarring as it is audacious. Though the film leans into silliness partially to cheat itself out of a narrative corner created by Maude’s entrapment and the confluence of enemy forces, the commitment to absurdity remains thoroughly engaging.

Moretz and Liang have cited numerous script rewrites to distance Shadow in the Cloud from its original writer, Max Landis, following a series of sexual abuse allegations against him. Landis does, though, still share writing credit on the final film alongside Liang, and it’s certainly easy to read things like the focus on sexism as some cynical attempt at career rehabilitation. Likewise, the themes of motherhood that have been built into the material feel as if they’ve been sprung from the imagination of someone who can’t envision a woman in the context of an action or horror sequence unless a child is also involved.

But regardless of how these ideas initially came about, Moretz and Liang together create such an impressively suffocating air of discomfort and dread in the film’s initial stretches that it would be a disservice to discount their work here. And even if Shadow in the Cloud never quite recaptures that early tension of Maude inside the gun turret, Liang still leverages the absolute implausibility of the later scenes into something brisk and exciting right to the very end.

Review: Blizzard of Souls Is a Nightmare Vision of Wartime Chaos

Review: Herself Stubbornly Leans into Its Metaphor for Personal Restoration