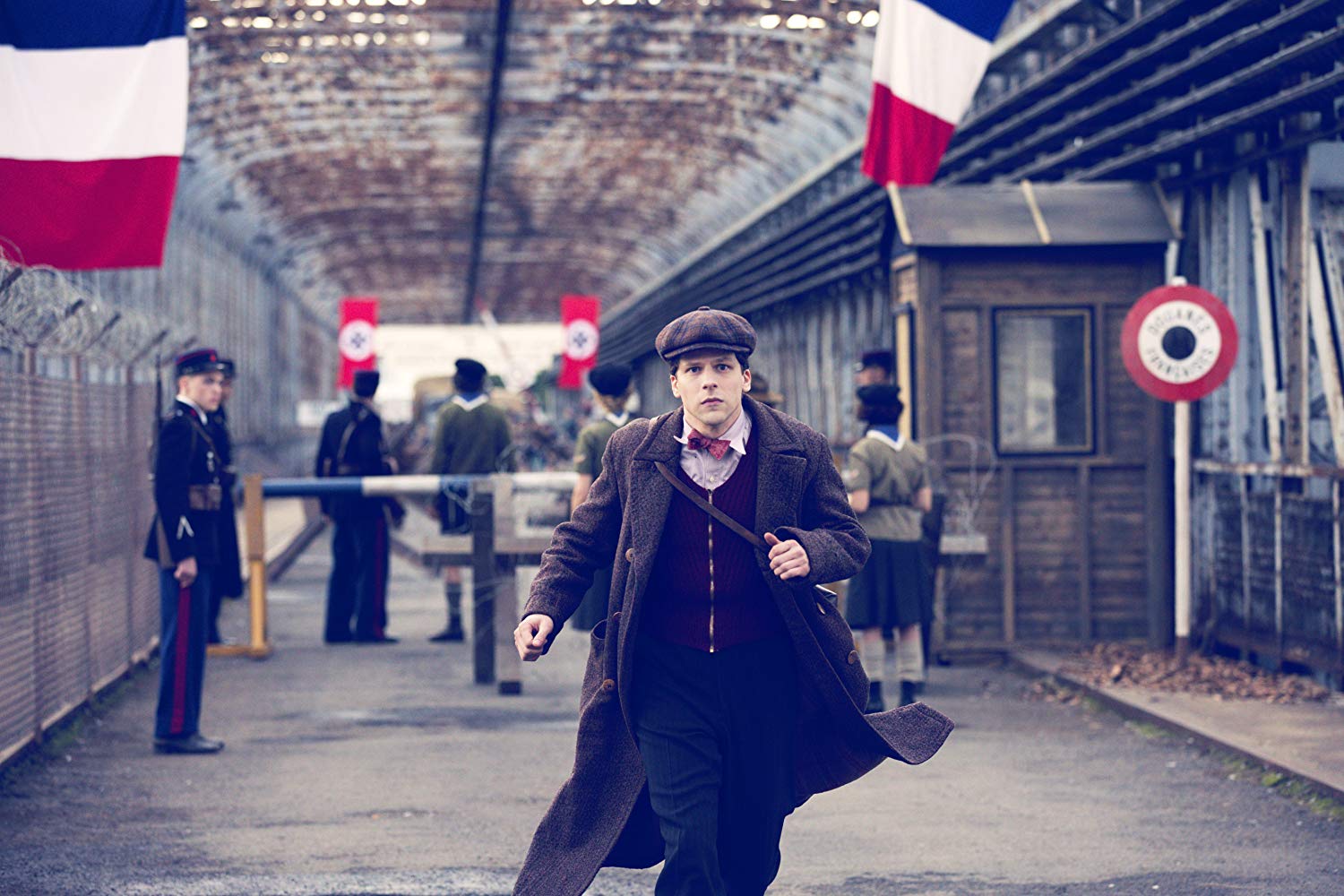 Writer-director Jonathan Jakubowicz’s Resistance is an old-fashioned and straightforward tale of brave opposition to the Nazi occupation of France whose most potentially intriguing angle becomes its least satisfying dimension. While featuring many familiar elements, including a sarcastically reluctant hero, a mentally unbalanced sadistic villain, and nail-biter last-minute escapes, it’s centered on a character who one doesn’t often see in World War II movies: a Nazi-fighting mime.

The mime in question is Marcel Mangel (Jesse Eisenberg)—he later changed his surname to Marceau—the son of a Jewish butcher living in Strasbourg, France. Tired of wearing a smock and cutting up meat in his father’s shop, he prefers putting on a Chaplin mustache and applying greasepaint to his face in order to clown around in cabarets. His more traditionally minded father, Charles (Karl Markovics), disapproves of Marcel’s creative life, while the audiences who Marcel performs for are clearly more interested in the dancing girls.

This light family drama might seem inappropriate following the gutting opening scene, in which Elsbeth (Bella Ramsey), a young Jewish girl in Munich, sees her parents gunned down during the Kristallnacht pogrom. But the comfortingly low-stakes nature of these early scenes skillfully illustrates the gently melancholic nature of Marcel’s clowning. At the same time, they also establish just how little the future superstar and his community appreciate the extent of the genocidal danger brewing just a few miles away in Germany.

Marcel’s call to arms comes with the arrival of a truckload of Jewish orphans, including Elsbeth. Ransomed from the Nazis, the orphans are put up in a nearby castle and watched over by a troop of somewhat adult-looking Jewish Boy and Girl Scouts. Guilted by his activist brother, Sigmund (Édgar Ramirez), into helping out, and eager to impress the willowy Emma (Clemence Poesy), Marcel uses his clowning to keep the kids entertained.

At this point, with its light comedy and rapturously beautiful Rhone Valley scenery, Resistance runs the clear risk of traipsing into Life Is Beautiful territory. But with the exception of one awkward scene, in which Marcel and Emma dress up as brownshirts and mug buffoonishly while trying to scare the kids into learning how to hide, Jakubowicz mostly steers clear of any unctuous sentimentalizing of responses to genocidal evil.

This determination to keep the story’s focus on the fight against the Nazis becomes clearer once war breaks out, France is occupied, and all Jews in the country have targets on their backs. Now responsible for even more orphans, Marcel and his compatriots relocate to Lyon and join the resistance. Heightening the stakes in Lyon is the presence of Gestapo chief Klaus Barbie (Matthias Schweighofer), a blithe sadist who likes to play the piano while executing people in the drained pool of his luxury headquarters at the Hotel Terminus. While Schweighofer’s portrayal of Barbie as a bright-eyed torture-happy sociopath who always looks on the verge of giggling veers close to movie-villain shtick, the character’s dark presence keeps the immediacy of Marcel’s mission front and center.

Jakubowicz’s strengths as a director become more clear in some of the set pieces staged after the action shifts to Lyon and Marcel’s group has to balance keeping themselves and the orphans alive in France or escaping to Switzerland. Showing a strong feel for crisply capturing the tense and buttoned-down panic of undercover operatives in occupied territory, Jakubowicz also leverages Eisenberg’s skill for simultaneously signaling vulnerability and resolve.

Where Resistance is likely least effective for many audiences is its attempt to portray Marcel as a masterful performer. It’s hard not to think of Richard Attenborough’s pushy and unfunny Chaplin in some of Eisenberg’s energetic but flat scenes performing as a clown or a mime. A couple of these are fairly stiff, particularly one where Marcel clowns to keep the orphans quiet while German soldiers prowl nearby, and another of him miming for a rapt crowd of American soldiers after being introduced by General George Patton (Ed Harris). (While this latter scene is somewhat inexplicable, it appears to have actually happened, following Marcel’s work for Patton as a liaison officer—a phenomenal pairing of sunny-gruff personalities that seems worthy of its own film.) In most other aspects, however, Resistance functions as a handsomely mounted biopic that tells a little-known story with considerable passion.

Review: Vivarium Looks Aloofly at the Nightmare of Conformity

Review: Atlantis’s Future Vision Grapples with a Past That Never Was